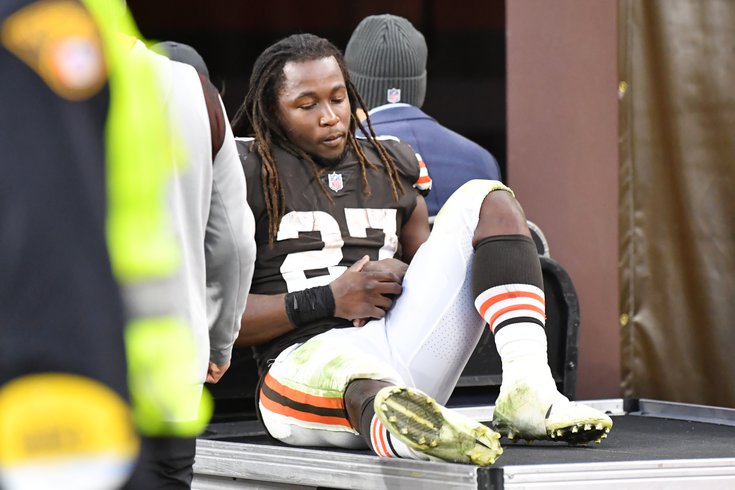 The injuries continue to pile up as some fantasy teams likely struggled to put up respectable numbers in Week 6.

With star-studded teams in the Bills, Cowboys, Chargers, Vikings and Steelers (and also the Jaguars) resting with bye weeks this coming week, things will only get more difficult, as next week could be your lowest scoring matchup of the season.

To better help you prepare your lineup and plan of attack, we've taken a look at some recent injuries from the week that was, and at players who could be making their gridiron returns in Week 7.

With Nick Chubb sidelined in Week 6 for Cleveland, Hunt wound up joining him with a calf injury that took him out of the loss, with no return. It appears he will miss a few weeks.

Whether Chubb will be able to make a speedy return to the field in Week 7, is up in the air and fantasy owners of each should follow closely and have contingency plans. D'Ernest Johnson would likely be the next man up on the ground if both RB miss the next game — a Thursday nighter.

Mayfield was somehow able to play through a dislocated shoulder Sunday, and was seen wearing a sling after the game ended. It's unknown how this will effect his Week 7 availability.

One more quick hit for Cleveland, which could welcome Landry back from the IR Thursday as he could be ready to return from a minor knee injury that's cost him four games. Watch his practice status early this week.

Jeudy is another talented wideout who appears ready to bounce back from an IR stint, as Denver designated him to return Saturday. He had an ankle injury and could be in practice this week.

Will Penny return to the field in Week 7? He's been re-activated from IR and with Chris Carson also on IR, there's a good chance he's active and potentially worthy of a waiver claim. If you have Alex Collins make sure you know who is starting before you fire up a Seahawks RB.

The rookie QB was just starting to gain momentum filling in for injured Jimmy Garoppolo when he suffered a left knee strain in Week 6. With Jimmy G on the mend, it's looking like either guy could play against the Colts in Week 7. Stay tuned to this one.

In a ridiculous confluence of events that likely only has happened before in a Madden game, Murray, Le'Veon Bell and Devonta Freeman each scored a touchdown for the Ravens Sunday. But it is Murray whose fantasy future is in doubt, as he left with an ankle injury. Are the other two veteran former Pro Bowl RBs reliable fantasy options going forward? It's certainly a risk, and Murray owners should follow closely to see how the backfield may shape up going forward.

Toney started for the Giants' depleted offense Sunday, but did not finish, exiting with an ankle injury. Basically, the entire menu of New York's skill players has an up-in-the-air status going forward — particularly Saquon Barkley. Pay attention this week.

Hilton made this return to Indy and had 80 yards receiving before leaving the game in the second half with a quad injury. His teammate, Campbell who had been excelling in his absence left as well after injuring his foot. Keep an eye on each guy as they try and get ready for Week 7.

Marshall no sooner made it onto an NFL field before he went out with a concussion. He's in the protocol and could be out again in Week 7.

Carolina was optimistic that McCaffrey's hamstring injury would only keep him out for a week or two, but the team decided to place him on short-term IR to let him heal thoroughly, putting Chuba Hubbard back into the fantasy mix for at least the next three weeks or so.