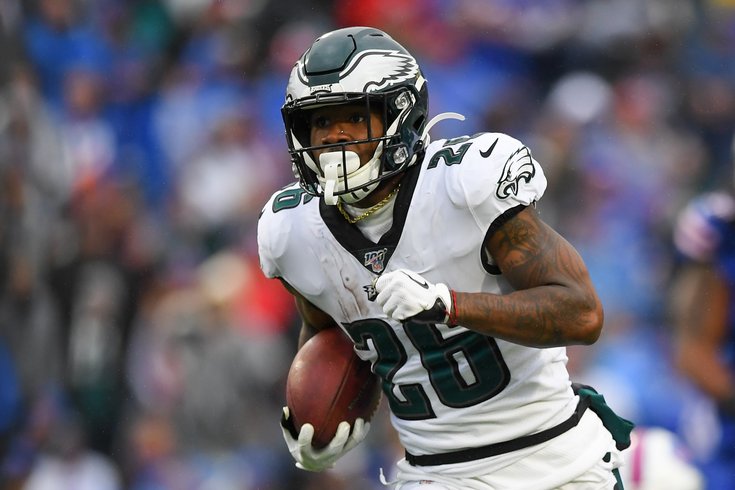 In our weekly examination and attempt at giving advice pertaining to fantasy football injuries, you'll no doubt notice — thankfully — a shorter than usual list of skill players who have fantasy impact. But the names below, like Miles Sanders, Raheem Mostert, Dalvin Cook and more, are players of great consequence.

Kudos if you've been able to overcome injury setbacks this season. There will be no stopping them, so make the best decisions you can as you plan for Week 7. Here's the latest we know on stars who got hurt this past Sunday:

The Eagles can't seem to catch a break, as they are on the verge of suiting up for Week 7 with nine of their starting 11 players on offense injured. Sanders hurt his knee Sunday and didn't return, and team officials fear it could be serious. A reports says the team is far more concerned with Sanders' knee than with Zach Ertz' ankle (more on that in a bit). If Sanders is out, the two running backs that will share duties are Boston Scott and Corey Clement. In Week 1, without Sanders, the pair combined to run 15 times for 54 yards and four catches for 22. A Sanders longterm setback could be bad for both the Eagles and for fantasy.

ESPN's @mortreport reporting that Miles Sanders will miss Thursday night's game with a knee injury, and that Zach Ertz will be out 3-4 weeks with an ankle injury.

The news is worse for Ertz...

Just when it looks like Ertz was starting to play like his old self, the injury bug bits another victim on the Eagles offense. The star tight end left Sunday's loss with an ankle injury but did briefly return before being ruled out. Ertz is having an MRI Monday to access the extent of the injury and we'll update this space with more info when it's out there. Without Dallas Goedert — who is on IR — there likely won't be a start-able tight end from Philly's offense on a short week against the Giants on Thursday (Richard Rodgers is the No. 3). Luckily for the Eagles, their bye week falls within the 3-4 week window.

Mostert has already missed a meaningful stretch due to injury this season, and Niners officials and fans are hoping it doesn't happen again. On Sunday Night Football after contributing a great deal early on, Mostert left and did not return after sustaining some kind of ankle injury. Jerrick McKinnon and JaMycal Hardy handled the position after Mostert left. McKinnon will instantly become a starting option if Mostert is out.

Cook missed Week 6 due to a groin issue and the starting nod went to Alexander Mattison. Is there a chance Minnesota's star running back misses more time? Well, they have Week 7 off thanks to a bye week, so chances are he will be fine by Week 8. Reports say a team official calls it a 99.9% chance he is on the field for the next Vikings game. So maybe sell high on Mattison if you picked him up.

Parker injured his groin and did not return in Miami's blowout win against the Jets. It's hard to say whether he would have played through it, if it was a closer contest. There is a bye week for the Fins in Week 7, so Parker may not miss any time.

The Ravens top running back left the team's win over the Eagles with an ankle injury and didn't return. J.K. Dobbins and Gus Edwards handled duties at the RB spot in his absence, but after the game head coach John Harbaugh said he didn't believe the injury to be serious. Baltimore has a bye week in Week 7, so if he is nursing a minor injury he may have time to heal up without missing any time.

Just as Smith was turning into a reliable fantasy tight end (five touchdowns in his last four games), the Tennessee tight end injured his ankle and was unable to finish Sunday's big overtime win against the Texans. Anthony Firkser is the back up and he did catch a touchdown in Week 6. If Smith misses time he may become a start-able tight end.

It looks like he will be day to day:

Titans’ TE Jonnu Smith is dealing with a “minor” ankle sprain and is expected to be considered questionable for Sunday’s game against the Steelers, per source.

This pair of Washington pass catchers each left Sunday's loss with injuries. Gandy-Golden hurt his hammy and former Temple wideout Wright left with an undisclosed issue as well. More will be known on both cases Monday afternoon.