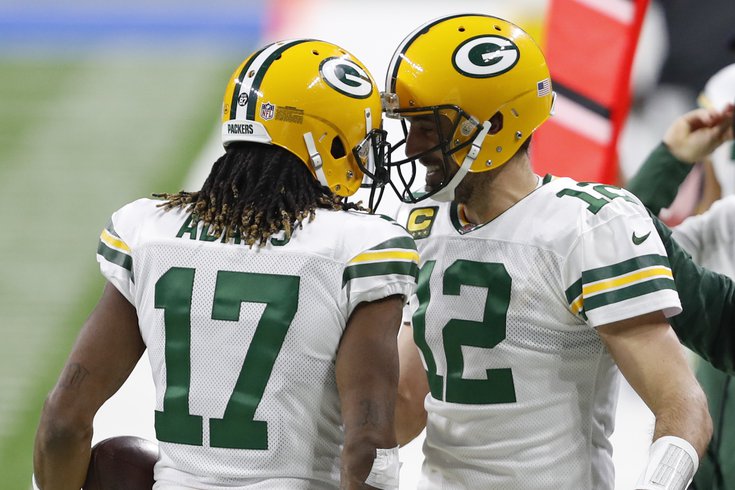 Green Bay Packers wide receiver Davante Adams celebrates with quarterback Aaron Rodgers after a touchdown during the first quarter against the Detroit Lions.

It's Week 8 in the NFL and the obvious suspects will surely be in your fantasy football starting lineup, from Patrick Mahomes to Derrick Henry to Calvin Ridley. But what if you have a borderline call? Or what if you are stuck between two middle-of-the-road players and don't know which button to press?

While we can't comb through your roster and advise you on who exactly to sit and start, we can give you some overall suggestions as to players we think will either go off this week, or who are worth relegating to the bench for the time being.

Here's a look at one start and one sit at each position:

We mentioned in our fantasy waiver advice that Jones was widely available and should be picked up. That's because he needs to start in Week 8. Until the Chiefs defense shows it can stop anyone — and with some starters likely returning for the Giants bruised and battered offense — the Giants will still probably lose, but could find themselves posting a lot of points against a malleable defense in KC. Jones should get you more than 20 points this week.

If you are an Aaron Rodgers owner and you are reading this, you're probably going to start him anyway. But heed this warning. On a short week, against the only undefeated team in football in the Arizona Cardinals and with his top three wide receivers potentially out for the game due to injury (Marquez Valdes-Scantling) or being on the COVID list (Davante Adams, Allen Lazard), Rodgers could have a tough go of it on Thursday night. Of course, he is Aaron Rodgers and could be fine too. But if you have a serviceable alternative, consider making the tough call and sitting out the MVP.

Herbert has been a revelation starting in place of David Montgomery, and until the latter returns, there is no reason not to ride the Herbert train for a little bit longer. In each of his three starts, Herbert has run for at least 75 yards and earned at least 18 carries. And last week, he had five catches too. Fire him up again against the 49ers this week.

Just as Gaskin may be turning a corner, we believe he is about to hit a wall. Going up against a Bills team that will probably blow the game open fairly early, the Fins will be taking it to the air pretty often. And with the potential returns of Will Fuller and DeVante Parker, Gaskin could wind up an afterthought in the Miami offense. Avoid him if you can.

This is a matchup we like, with the Browns defense being pretty terrible against opposing wideouts. Claypool is talented and will be the No. 2 this week lining up next to Dionte Johnson, with injuries keeping some other Pittsburgh pass catchers sidelined. He had seven targets last week and that volume should continue to make him playable.

If Joe Flacco were the starter in Week 8, we wouldn't hold this concern. But following his trade from the Eagles to New York, it looks like there may be a week before Flacco takes over, as the Jets announced that Mike White will start this week against the talented Bengals defense. We are sounding the alarm for fantasy owners to avoid not only Davis, but the entire Jets passing game if at all possible this week with White under center.

With so much uncertainty surrounding the Packers wideouts, Tonyan will be on the field and has been a favorite target for Rodgers for a few weeks now. He's probably got a high floor this week and is worth starting if you have him.

The numbers suggest that Cox is the very definition of a touchdown-or-bust player, who has four touchdowns over the last four weeks due to good luck. He has run fewer routes than Jack Doyle for the Colts offense and the odds suggest he will eventually throw up a stinker of a game score. Stay away, or sell high on Alie-Cox.