And sit the Bears running backs... 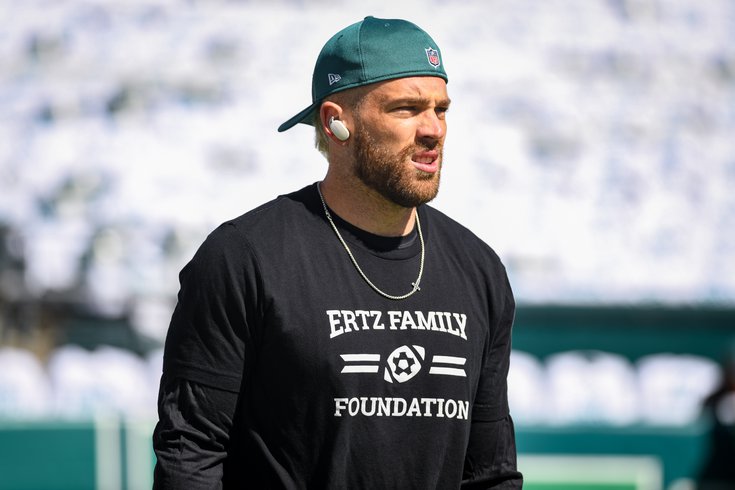 Former Eagles tight end Zach Ertz will play his first game with the Cardinals this week.

So we realize that many of you won't have the luxury of simply reading this column and deciding that we've convinced you to bench one of the players we recommend sitting.

With six teams on byes and most of them filled with fantasy stars, many team owners are happy to simply field a lineup that is full of starters.

Still, if you do have a decision to make regarding one of the players we'll examine below, it's worth doing the research and making the tough decision required. It could win you your week against an opponent that is potentially just as lacking in depth and options as you.

And so without further ado, and avoiding as we always do the obvious superstars to sit and start, here are some borderline calls we're making for your fantasy team:

Not only is Ryan starting to excel and post impressive numbers, the soft portion of the schedule the Falcons are currently in is allowing him to get some momentum. With the lowly Dolphins next on the schedule, with Calvin Ridley returning and with rookie tight end Kyle Pitts starting to come on, the ingredients are there for a monster Ryan performance. Fire him up this week.

The Lions are really lacking much for Goff to work with by way of reliable targets, and the Rams defense is a force to be reckoned with. If you're in a deep league and stuck with Goff, good luck. If you are able to pick up someone on waivers and go in a different direction, we highly recommend you do so.

If you look at Edmonds' recent performances, you surely have reason to pause before electing to start him this week. But the Texans are god awful, and with the high-powered Cardinals offense likely to be able to open up a large lead sometime in the middle of the game, Arizona may rely more on the ground game than normal. Edmonds could get a lot of work Sunday.

Herbert was a beast last week, but will he do it again against a Buccaneers team that is one of the best run-stopping units in football? In addition, Damien Williams is back this week, and it's unclear whether the rookie will be given the lion's share of touches again or if he'll split with Williams. If you have other options, use them, as the hierarchy in the Chicago backfield is unclear right now.

We'd like to preface this entry with a warning that the Giants wide receiving corps has been an absolute mess this season with different guys hurt and contributing every week. However, Shepard is the hot hand and has been a beast in every game he's been healthy enough to finish — including a 10-reception, 14-target performance in a blowout loss last week. He should get some opportunities again vs. Carolina.

J'Marr Chase is the top dog in Cincinnati and Higgins' production comes second. He's not been his same dynamic self as when he was a rookie, and the Ravens defense is pretty tough against wide receivers. He's worth keeping on the sidelines.

Yes, it's his first week with a new team and that's often times a red flag. But Ertz is a very smart player, and had the benefit of being traded Friday of last week, giving him more than a week to get familiar with a new scheme and teammates. He also has a favorable matchup against the terrible Texans and with the Cardinals having basically no one at tight end, he'll be thrown into the fire right away.

As of now, Gronk's status is up in the air for this week, but if he goes he's probably going to be less than 100 percent, and will be splitting tight end targets with O.J. Howard, who has played pretty well of late. Stay away if he's in the lineup.