Quick transition: While trying to learn playbook, Green-Beckham will get time with starters 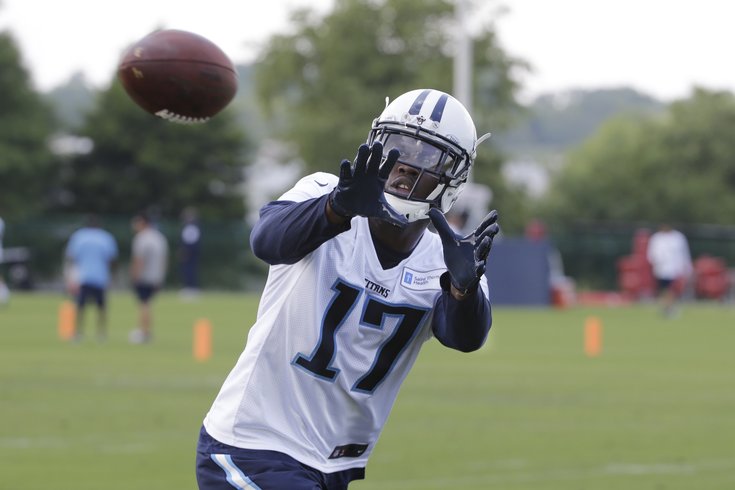 The Eagles add Dorial Green-Beckham to a lackluster group of receivers.

After watching the Eagles’ first game of the preseason, Philadelphia finally got to see something that deep down, we already knew. To paraphrase Rick Pitino, DeSean Jackson or Jeremy Maclin aren’t walking through that door.

The Eagles were in such rough shape at receiver that a player who was a member of the Tennessee Titans just one week ago (and someone acquired via trade for the small price of a reserve offensive lineman) will work in with the starters for the all-important third preseason game at Indianapolis.

Hey, desperate times call for desperate measures. For Dorial Green-Beckham, getting traded to Philadelphia represents a major opportunity, if not necessarily an easy one.

“We’re not moving him around,” Doug Pederson said. “So he’s lining up in one spot, one position, which is good for him right now. He’s playing fast, and that’s what we ask him to do, and he’s being decisive with his routes. He’s such a big body that covering guys up in the run game will be a big benefit as well.”

Standing in front of his locker on Wednesday afternoon, the 6’5”, 237-pound Green-Beckham’s size is apparent. Yet even if the Eagles simplify the offense for him, a player attempting to learn a new scheme in the middle of training camp remains a major question mark, especially someone who reportedly had trouble fully grasping the playbook in Tennessee.

When asked about the difficulty of trying to make that transition on the fly, like his coaches, Green-Beckham tried to simplify things.

“When you think about it, it’s just playing football,” Green-Beckham said. “We’ve been doing it for a long time.

“Coming from a different organization, you hear different calls. Then you come here and everything is different. But it’s up to you about putting in that extra work and showing you’re accountable.”

Green-Beckham said that while aspects of the two offenses are similar, the best way for him to cram before the season starts is to not compare Pederson and Frank Reich’s scheme to what he was learning next to Marcus Mariota in Tennessee.

“For me, I just feel like I got to erase those memories from there and put a whole new playbook in my head,” Green-Beckham said.

Coming into Philly, Green-Beckham mentioned Jordan Matthews, Marcus Smith, and Nelson Agholor as players he knew from either college or the draft process. The 23-year old said that he frequently asks other receivers questions about the offense in trying to learn it as quickly as possible.

As a team, you can bet the Eagles are doing everything they can to make that happen.

“He’s coming in here basically right at the end of camp trying to learn a system,” Pederson said. “So I I’ve been there even as a player in 2000 when I left here and went to Cleveland, it was a totally new system that you’re trying to learn. So you keep it small, you keep it simple, and allow him to use his skill set.”