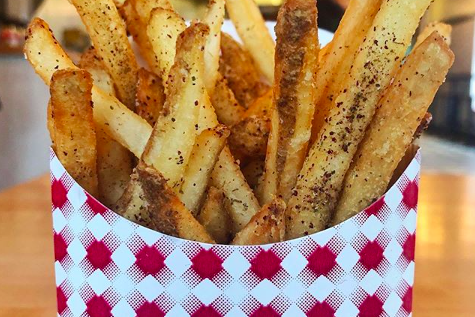 Za'atar fries are now available at all Federal Donuts locations in Philadelphia.

The Federal Donuts trifecta of fried chicken, coffee and donuts has always been unimpeachable, but now you can officially add fries to the equation.

The CookNSolo restaurant announced via Instagram on Monday that it will now have Za'atar fries at all brick and mortar locations — seven, including the Whole Foods in Fairmount and the stand at Citizens Bank Park.

Za'atar is the name for a blend of Middle Eastern herbs used to season a variety of foods, most commonly pita and hummus. Adding it to fries could give the crab fries at Chickie's and Pete's a run for their money.

The Za'atar fries will be available daily beginning at 11 a.m. at all locations.

The news follows CookNSolo's Zahav being named the best restaurant in the United States by the James Beard Foundation.

Earlier this year, Federal Donuts launched a line of breakfast sandwiches to round out a menu that has become a staple in Philadelphia since it arrived in 2011.