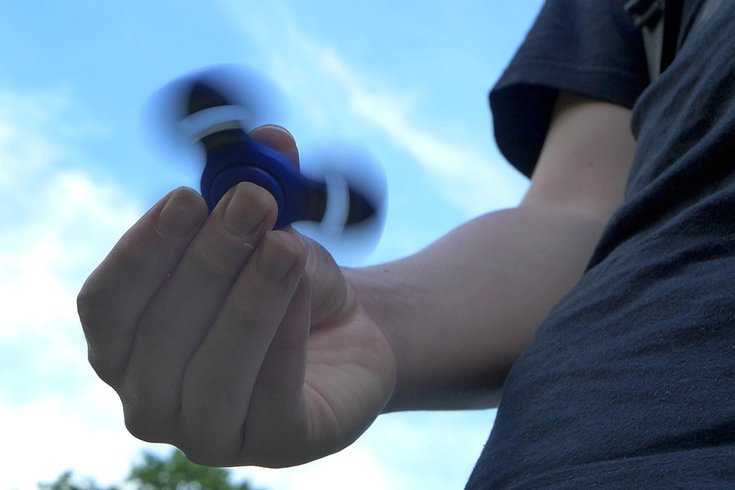 Fidget spinners have been so popular with children that retail stores are struggling to keep them in stock. But the stress-relieving toys, which sparked a debate about whether they are appropriate for children to play with in school, could lose popularity with schools letting out for summer.

Three young boys are walking home from the subway on a breezy May evening in South Philadelphia when one stops dead in his tracks as anxiety overtakes him.

"My fidget spinner!" he exclaims, jaw dropped and eyes wide. Accusations start flying as to who may have left it where. The panic is palpable.

He likely knows that if it's gone for good, his spinner may be difficult to replace. Unless it's ordered online – it's the most popular toy on Amazon by a mile – snagging one at a store is nearly impossible, as retailers struggle to keep them in stock. The Five Below in Center City was fresh out last Tuesday, restocked by Saturday with a two-per-customer limit, and cleaned out again by Monday.

Invented in the '80s, fidget spinners aren't remarkable to look at: two or three equidistant spurs that rotate around a thumb-sized circle. But get one in your hand, and it's addicting. The rhythmic whirl as it spins between your fingers is akin to those oddly-satisfying videos all over the internet. It's not hard to see why they've taken over. 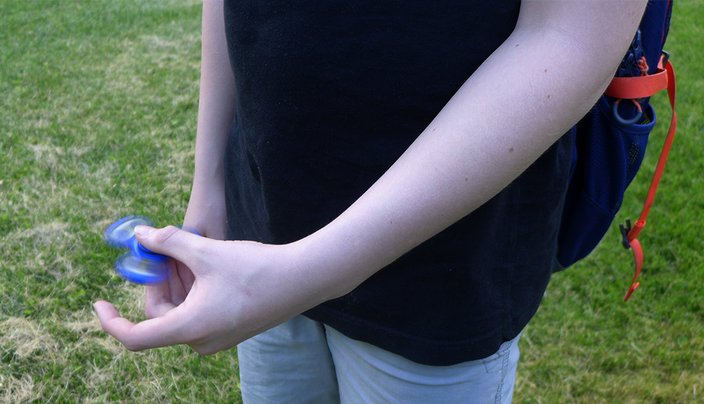 Fidget spinners have all the traits of a fad toy: portable, gender-neutral and a reasonable price. Some schools have banned them from classrooms.

CAN THEY HELP STUDENTS FOCUS BETTER?

“I would say they have a potential benefit (on) either end of the spectrum. I would want to permit kids to use them and evaluate their use.” – Dr. Martin Franklin, clinical psychologist, Penn

When a toy or game or trend takes hold of the nation's youth, it inevitably becomes the problem of schools. Some schools have already barred them from the classroom because they've become a distraction. But the skyrocketing popularity of fidget spinners in recent months has been accompanied by stories that the stress relieving toy can aid students with ADHD and autism, an assertion that's thrown a wrench into that narrative.

Depending on who you ask, the obsession over fidget spinners belongs somewhere on a broad spectrum that spans from learning tool with untapped potential to a needless distraction to a soon-to-be-forgotten fad.

One thing is certain about the gadgets: We don't actually know a lot about them. Manufacturers have gotten flak from experts for marketing them as learning aids to children with ADHD and autism. The anecdotal evidence is there; the scientific research is not.

But that's precisely why we should find out, argues Dr. Martin Franklin, a clinical psychologist at the University of Pennsylvania who studies tics and anxiety in adolescents.

"People want to say just ban them, because they could distract," Franklin told PhillyVoice.com. "How about we do this scientifically? My sense of it is there are a million experiments to be done."

Before looking at whether a fidget spinner could help children focus more or less, it's important to understand the line between an attention disorder diagnosis and simply being the jumpy kid in class is not a fine one — it's a "huge" range, according to Franklin, and most people are a mix of externalized and internalized habits and behaviors.

For externalized children, who have higher tendencies toward ADHD but may not have an official diagnosis, they could really benefit by putting something in their hand, Franklin argues.

"Sometimes kids will tell me flat out, if I'm not doing something, and I have to just sit here and listen to somebody, I'm going to have a hard time." Franklin notes that kids in this category may be chastised for doodling, but that may be exactly how they pay attention.

"We think we can multitask, but only two percent of us in the world are multitaskers. We can't all be multitaskers." – Kathy Hirsh-Pasek, psychology professor, Temple University

Proving that theory on a bigger scale, however, requires evidence. Franklin suggests behavioral experiments to see its effects in a classroom setting are the possible solution.

"If a kid is spinning it, and not being distracting and doing better in class, I can gather data," Franklin said.

Most media coverage has focused on how they're used by children with autism and ADHD, but they've have been used with children in other capacities. Vince Confalone, an Allentown native and mental health-counseling intern at an outpatient clinic in Vermont, says fidget toys can do wonders.

Confalone acknowledges there's not empirical evidence to support their efficacy. But he's given fidget cubes — the fidget spinner's boxy brother — to children he's counseling. He says they flip like a switch once they've got them in their hands.

"Kids will sit there and blab all day about their parents fighting while mashing the fidget cube, but they are much less engaged when they don't have it in their hands," Confalone said.

Sensory activities and fidget toys have long been used in therapy for children, much like they have been for kids with autism and ADHD.

"When you add play and sensory activities to therapy work with kids, it allows them to open up about what they're going through," Confalone said.

“I would say they have a potential benefit (on) either end of the spectrum,” Franklin said. “I would want to permit kids to use them and evaluate their use.”

The idea that the toys' effectiveness could translate to traditional classroom settings is a dubious to some.

Kathy Hirsh-Pasek, a psychology professor at Temple University, was admittedly unfamiliar with the fidget toys. But once she looked them up online and has them described to her, the immediate parallel she makes is texting and driving.

"You think you're paying attention to the road. We think we can multitask, but only two percent of us in the world are multitaskers," Hirsh-Pasek explained. "We can't all be multitaskers."

"Kids will sit there and blab all day about their parents fighting while mashing the fidget cube, but they are much less engaged when they don't have it in their hands." –Vince Confalone, mental health-counseling intern

Her point? A kid may think a fidget toy is helping him or her focus in the classroom. But they're still focusing some of their attention on the gadget.

"Attention is a funny thing," she said, "it's sort of a limited capacity sort of thing."

Hirsh-Pasek, who has studied the role of play in learning, notes there are plenty of examples of sensory activities and non-traditional methods aiding kids' development. The computer game Minecraft, for example, has a wealth of educational benefits.

But allowing kids to bring their spinners and cubes into the classroom to help them focus, aside from those who have permission from their doctors because of a diagnosis, sounds like a stretch to her.

"Fidgeting or doodling, whatever it is, the bottom line is we just aren’t multitaskers," Hirsh-Pasek said. "If you really want to focus attention, you have to focus on what you're trying to focus on."

PASSING FAD OR HERE TO STAY?

There's also the possibility we won't even remember fidget spinners in a few months. The Upper Darby School District has noticed the uptick of kids carrying them in school, and has had cases where they've become distracting. Instead of instituting a ban, however, they're allowing teachers to decide on a case-by-case basis, treating them like anything else, including cellphones.

"We don't have a policy," said district spokesperson Dana Spino. "I think it seems like every year there's something. The spinners are this year's Pokémon cards, a fad the kids are excited about."

A fad is how Joel Best, a sociology professor at the University of Delaware, categorizes it.

"I don’t think it will be a thing in September," Best said. "This is the sort of thing that tends to come for a brief time and gets old."

Best believes parents and educators tend to overreact to such trend, and that trying to understand why they've caught on is a "fool's errand." Just look at the hula hoop, which took over in the 1950s. Fidget spinners are portable, gender-neutral and reasonably priced; it's not much more complicated than that, Best argues.

"I would say this is a toy fad," he said. "There's been lots of them and there will be more."

But what if they're not? Best admits people are "terrible" at predicting whether trends stick around. He notes men's wristwatches were a temporary fix for World War I soldiers, and they defied predictions of being a passing fad to stick around to this day.

If fidget spinners endure the same fate, the answer to how schools deal with them probably isn't black and white, such as straight bans or just allowing them in the classroom without rules.

"I don't think we're fantastic about people being flexible," Franklin said. Again, his answer is more research. If they're mostly a distraction, "why don't we find out?"

Franklin recalls a favorite quote of his from author H.L. Mencken: "For every complex problem there is an answer that is clear, simple, and wrong."