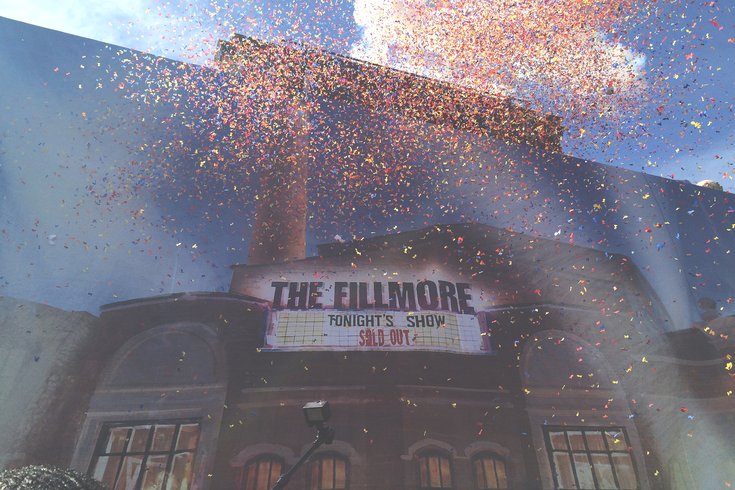 The Fillmore Philadelphia in Fishtown hosts concerts and other events.

A new landmark is coming to Fishtown. The Fillmore Philadelphia, a 2,500 capacity concert venue complete with an additional upstairs stage and a VIP bar, is set to land at Frankford and Delaware avenues this fall.

The site of the former Ajax Metal Company building is now in the midst of an overhaul thanks to Live Nation's House of Blues Entertainment division.

On the building's top level, guests will find a more intimate live music club fit for 450 people and smaller acts called The Foundry. Box seats will connect the main auditorium to the venue's upper level VIP club called Circle Bar. Located on the second floor, Circle Bar (below) will have its own private entrance, bottle service and a lounge area for chilling out before, during or after a show. 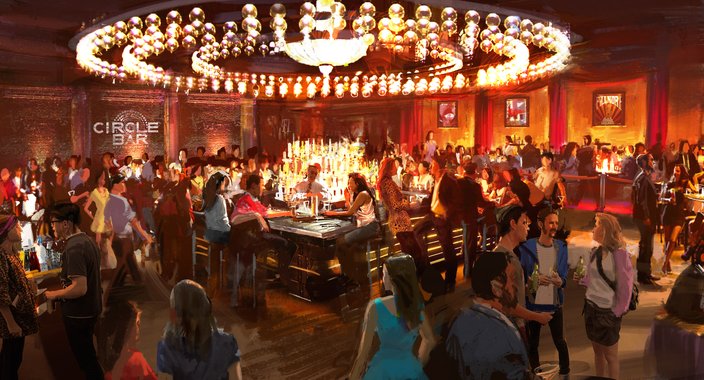 The release announcing The Fillmore's opening also suggests concert goers will be quite pleased with the food and drink options. Libations from local companies such as Yards, Victory and Philadelphia Distilling are on the menu. A selection of wine and small batch liquor will be available, as will a variety of foods from cheesesteaks to cheese plates.

Of the development Ron Benison, CEO of House of Blues Entertainment, said: "We’re building what we believe will be the best club in America."

The Fillmore is sure to shake up the local music scene, as its closet neighbors -- the Barbary and Johnny Brenda's -- are far more intimate. Such an overhaul of the current property is only part of an overall revival of the area which will serve as a connection between the neighborhood and the Delaware River waterfront. 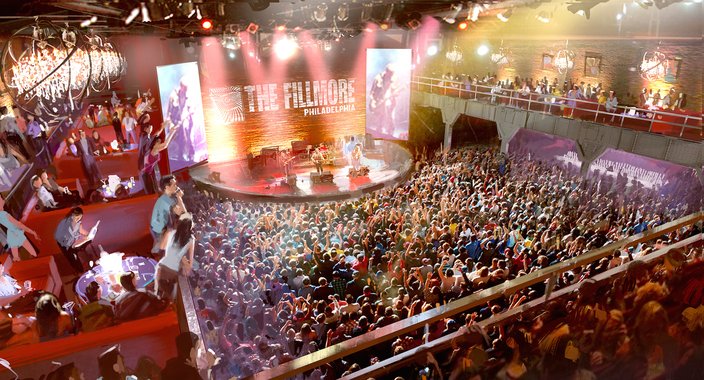 Renderings of the interior auditorium. House of Blues Entertainment/Live Nation

For Benison, this makes Fishtown the perfect spot for the Fillmore venue, a project that was developed with Michael Samschick of Core Realty.

“There’s a major resurgence in that community and so much going on down there that’s really, really very cool," he said.

A concert venue was first proposed for the space in 2012 as part of an entertainment complex on Canal Street North. Previous plans for that complex, called Penn Treaty Village, included a bowling alley, country western bar, restaurant and distillery.

“[Fishtown has] young professionals, artists and there’s a great vibe down there. When we look at the essence of The Fillmore, The Fillmore morphs into its environment and it’s important that we have the right building and the right location," Benison said. "All of those things aligned and there’s a nice patina to the building. It so much fits The Fillmore’s aesthetic. The Fillmore’s brand is great music and great live venues.”

As for the people of Fishtown, most in the neighborhood are on board with and excited about the project. Fishtown Neighbors Association President A. Jordan Rushie said this development fits right in with the other projects, like a boutique hotel going on Frankford Avenue and restaurants, set to spruce up the area.

"With the hotel in development and the Penn Treaty Village, Fishtown’s going to be something special in Philadelphia. It won't just help Fishtown, but it will help the city as a whole" to become a destination, Rushie said.

He also gave a vote of approval to the Samschick development crew for their work thus far.

"We’ve been very impressed with their willingness to work with the neighborhood and hear our concerns," Rushie said.