Film breakdown: Eagles should run their offense through their tight ends 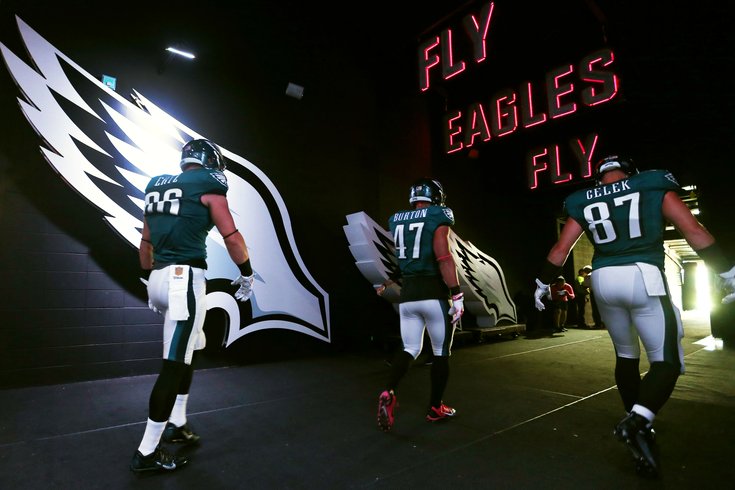 The Eagles may run their offense through Zach Ertz, Trey Burton, and Brent Celek.

Probably not coincidentally, tight end is arguably the biggest strength of the offense, with a trio of very good ones in Zach Ertz, Brent Celek, and Trey Burton.

In 2015, Ertz became the 17th tight end in NFL history to have at least 2,000 receiving yards after his first three seasons in the league. Last year, Ertz was dealing with a sports hernia injury which slowed him down early in the season, but over the last four games he caught 35 passes for 450 yards.

Celek is easily the best blocking tight end of the three, but he's also a threat as a receiver, as he has 4713 yards on 371 career catches, and runs like bull in a china shop once he has the ball in his hands. Celek is one of the top 60 receiving tight ends (yardage-wise) in NFL history.

And finally, Burton has been perhaps the biggest standout at training camp, making multiple impressive plays seemingly every day. Under Chip Kelly, Burton was criminally under-used, which is almost certain to change under Pederson.

“Tight end is a strength of this roster, this offensive unit," said offensive coordinator Frank Reich. "We feel like Zach has a great feel in route running. He just knows how to create leverage; he knows how to use his body; he has a big catch radius. Trey is like a wide receiver out there, and you get him out there and he’s got the speed, he’s got natural instinctive moves for a tight end. The one that surprises me though has been Brent. I came in here thinking, ‘Hey, Brent is our blocking tight end.’ But the guy knows how to run routes. He’s a really smart route runner, and I have a lot of confidence in him, and I know the quarterbacks do as well. So, that’s a really good thing for us."

Like the 2016 Eagles, Pederson's Kansas City Chiefs teams lacked high-end talent at the wide receiver position, which forced him and head coach Andy Reid to get creative with their play calling to make up for that deficiency. In 2014, before the arrival of Jeremy Maclin, the Chiefs' most effective grouping was "13 personnel" (1 RB, 1 WR, 3 TEs). According to Adam Teicher of ESPN, quarterback Alex Smith's efficiency skyrocketed when using three tight end sets through the first eight games of that season before No. 3 tight end Demetrius Harris broke his ankle and was done for the season.

Through the first eight games, the Chiefs went with three tight ends on 56 plays, more than all but three other teams. Quarterback Alex Smith on those 56 plays completed 22-of-25 passes. That's an 88-percent completion rate. Those passes had a per-attempt average of 8.6 yards, and four of them went for touchdowns. Those numbers are well beyond what Smith does when throwing the ball with other personnel groupings.

The Chiefs were also able to run the ball for a healthy 4.4-yard-per-carry average with three tight ends on the field.

"It is very effective in the run game," said Pederson, speaking about those three tight end sets. "It also creates some matchup issues when you can allow your guys to kind of spread the field and put linebackers on tight ends. Linebackers aren't necessarily used to space and tight ends are. We’ve got good guys that can run routes. It creates a little bit of an issue on defense from a match-up standpoint. Who is going where? It also gives you some man-zone indicators for quarterbacks. It's something that we'll continue to use throughout camp, and then obviously in the regular season."

Pederson has had his trio of tight ends watching old Chiefs film.

“I think they did a lot of good stuff," said Celek. "They were able to get mismatches in the passing game. And also in the run game they were able to do some things because they got big bodies there in the edge. I love it. The more tight ends the better.”

The difference between the 2014 Chiefs and the 2016 Eagles, however, is that the Eagles' tight ends, on the whole, are better. Travis Kelce is a very good tight end with a similar skill set to Ertz, but Celek and Burton are far better than the Chiefs' No. 2 and No. 3 tight ends, Anthony Fasano and Harris.

“Our guys are a little different than their guys, said Ertz. "They have two blocking tight ends and a wide receiver. In our opinion, we have three of both – three blocking and three receiving tight ends in that set, so I think it’s going to help out in those situations.

“Whenever you’re in 13 personnel, when you have one receiver and three tight ends in the game, defenses don’t really know whether to go base or nickel, but if they’re going to put in an extra linebacker it’s going to be tough for them to stop us in the passing game. In my opinion, obviously, we have to go out there and make plays when the time comes. But I think that’s the mindset behind putting three of us on the field.”

The Chiefs' passing concepts when they went to three tight end sets weren't all that complicated. For example, they would often line up all three tight ends on the perimeter, where they'd throw a quick screen to Kelce. If the opponent was in man coverage, Kelce could try to beat the linebackers with speed. If they were in zone the Chiefs would have a major advantage with a pair of tight ends blocking defensive backs.

For example, 49ers cornerback Chris Culliver (#29) is borderline useless against this formation on the goal line:

Here are the Chiefs' lead blocking tight ends easily moving safety TJ McDonald (#25) out of the play against the Rams:

Clearly in those looks, Celek would likely be one of the lead blocker, with either Ertz or Burton capable of toting the rock. Burton has impressive running ability ...

...while Ertz has underrated ability to fend off opposing tacklers:

In the run game, one of the staples in the Chiefs' three tight end looks was to line up all three on the end of the line. Ideally, you just win up front and open up a nice hole:

However, often times, even when the Chiefs were unable to open up holes inside with so many extra bodies along the line, Chiefs RBs were able to bounce runs outside, putting pressure on defensive backs to try to make the play. Many defensive backs aren't all that fired up about making tackles near the line of scrimmage. For example, here's CB Brent Grimes whiffing on a tackle attempt of Knile Davis, leading to a nice 10-yard gain:

Here's Davis bouncing off a second awful Grimes tackle attempt (coming from off-screen near the LOS on the left side):

But the biggest potential benefit to the Eagles employing three tight end sets is the matchups they'll get in the passing against opposing linebackers and safeties. This is particularly true in the NFC East, where the Cowboys, Redskins, and Giants all have significant holes in their defenses either at linebacker and safety, and in some cases, both.

And here's a depth concept against the Jets. The Chiefs will be running a 10-yard in with Fasano to see what the safety does. If he plays back, hit Fasano over the middle. If he bites the cheese, Kelce will be wide open over the top on a post route:

"If you look at Doug’s system and what they did in Kansas City with their tight ends and how we’ll utilize them here, it’ll be very consistent with that, and we’ve got the players to do it," said Reich. "We can mix it up. They’re all real good, smart route runners – every one of them. So, we expect really good production from that unit.”

The Eagles may do more than just get good production from that unit. They should probably run their offense through it.