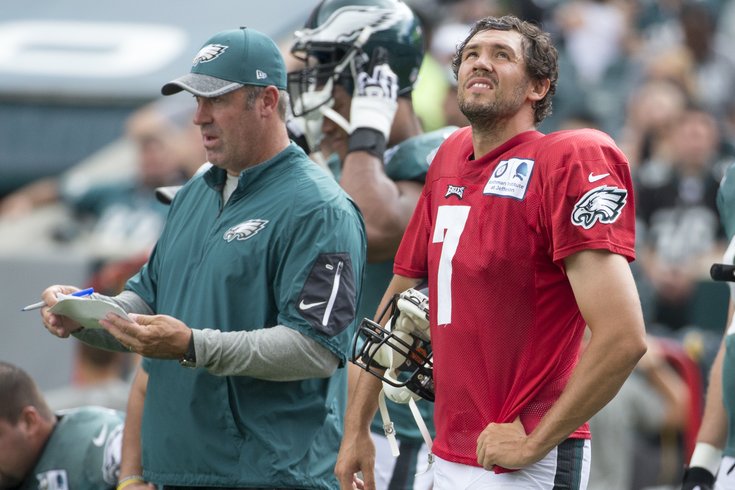 The Philadelphia Eagles' 2016 training camp is now two weeks deep, and players are beginning to separate from the pack, both in good ways and bad. So ... let's update the depth chart.

First we'll show the depth chart as a whole, with a highly scientific color-coded system showing starters, reserves, inactives, and practice squad guys. And then we'll do a quick rundown at each position.

While Carson Wentz is the only quarterback who has produced "wow" moments, Sam Bradford has clearly been to most accurate and consistent quarterback in camp. Meanwhile Chase Daniel started off camp playing well, but he's hit a rough patch of late.

As training camp has progressed, Kenjon Barner has gotten better. I've been impressed with his ability is pass protection, although he is still very far from a polished receiver out of the backfield, which is a Doug Pederson must-have skill. Still, with Wendell Smallwood having missed a big chunk of camp already, Barner's chance to (A) make the team and (B) be active on game day have risen.

I listed Chris Givens as the No. 3 receiver ahead of Rueben Randle, but with no conviction whatsoever. The first five receivers are easy, but I added a sixth. One of the standouts at camp so far has been undrafted wide receiver Paul Turner, who has probably made more catches in camp than any receiver on the team, and that includes catch magnet Jordan Matthews. Based on his performance so far, Turner deserves to make the team. We'll see if his practice success carries over into the preseason games.

Doug Pederson has said that he wants to keep four tight ends active on game day. That's fine and good, but four tight ends don't deserve to make the roster. Zach Ertz, Brent Celek, and Trey Burton form an outstanding trio at tight end, and then there's an enormous dropoff. Fourth tight end Chris Pantale is considered a lock by some, but he has simply not been good. He has dropped a boatload of passes, and isn't such a good blocker that he makes up for his receiving deficiencies. Pantale may make it, but for now I'll be stubborn and leave him off.

Instead, I'll go outside the box a bit and include Dillon Gordon, who is currently listed as an offensive lineman. The Eagles converted Gordon from tight end out of LSU, and have given him reps at FB. While I haven't seen Gordon attempt to catch a pass throughout camp, he is a far better blocker than Pantale.

The starting spot up for grabs here is at LG, where we updated that camp battle yesterday. I believe Stefen Wisniewski should start at LG, but Allen Barbre probably will start there.

A minor surprise (to some) here could be the omission of fifth round OT Halapoulivaati Vaitai, who could be destined for the practice squad. As we noted on Saturday, fifth round picks are hardly Teflon. A quick list of rookie fifth-round picks who did not make the Eagles' final 53-man roster their rookie seasons the last 10 camps:

Some of those players got hurt. Others just stunk. I believe the numbers at OT could dictate that Vaitai could join that list.

I have two changes here from the last version. Marcus Smith does not deserve a roster spot. The Eagles will take a bit of a cap hit to cut him, but I believe that keeping him on the roster sends a bad message that bad players can make the team over better players because of other factors, such as former draft position or contract status. Steven Means has thoroughly outplayed Smith. Maybe the Eagles can make a bust for bust trade? Even if not, enough is enough. Cut bait.

The other change is Beau Allen making the team over Taylor Hart. I've come to the conclusion that Allen is a more useful player, who can contribute as a situation run stuffer, while Hart is "just a guy" across the board, at best.

We'll see if the Eagles sign former Titans and Lions LB Stephen Tulloch, which will add confusion to the Eagles' linebacking corps.

As we noted in our camp battle piece, for the entirety of camp, the starting corners have been former "Jim Schwartz guys" Leodis McKelvin and Ron Brooks. It was clear to me in May that McKelvin would lock down one starting job. On the other side, however, it felt like Brooks was only in there because he knew Schwartz's defense. Maybe not. Brooks might have a major role on this defense. Not only might he start, but he may also move into the slot when the Eagles send out their nickel package. Outside corner and slot corner are two very different nuanced positions, which puts a lot of responsibility on Brooks.

Nolan Carroll is probably the most likely player to come in on those nickel sets, where he'll play outside. His stiffest competition will come from rookie seventh-round pick Jalen Mills, who is very clearly ahead of 2015 second-round pick Eric Rowe at this point.

Blake Countess should be safe, while Chris Maragos is a stud special teamer and a competent reserve safety. If the Eagles keep five safeties, I wouldn't sleep on Jaylen Watkins, who has had a decent camp.

The only camp battle here is Cody Parkey vs. Caleb Sturgis. So far Sturgis is 28/31 through the first two weeks of camp, while Parkey is 23/31.