The Eagles annihilated the Giants thanks to an explosive third quarter 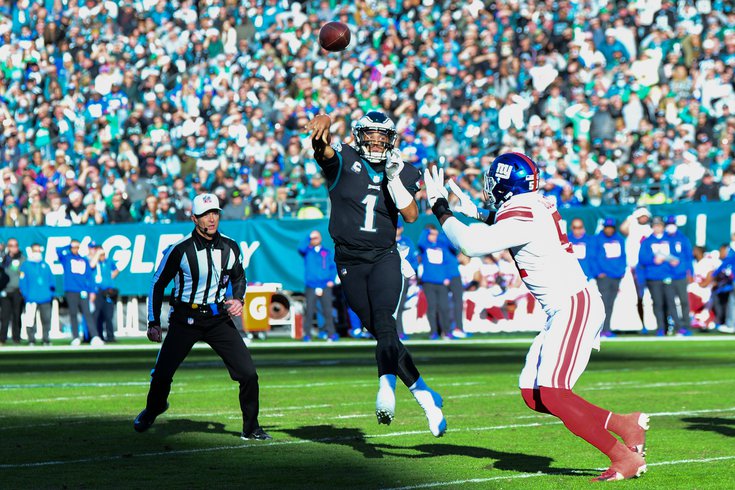 Jalen Hurts threw some bombs in the Eagles win Sunday.

The Eagles overcame a brutal first-half from the offense to blow out the Giants on Sunday, with their 34-10 victory pushing the Eagles closer to a potential playoff berth in Nick Sirianni's first season.

• Philadelphia's defensive line was their best unit in the first half against New York, so it was no surprise that they made the difference-making play to open the second half and change the tenor of this game. With Javon Hargrave collapsing the pocket, oft-maligned backup Genard Avery burst through space and got to Jake Fromm, who airmailed an easy interception opportunity to Rodney McLeod:

This was an easy assignment for the defense, but in fairness, they have struggled to stop quarterbacks of all calibers this season, so the fact that they showed up and looked dominant for most of the day should not be taken for granted.

It looked for a moment that the Eagles were going to squander this opportunity to change the game, with a holding penalty on Quez Watkins wiping out a Dallas Goedert touchdown and forcing the Eagles to take this possession all the way down to a critical third-and-goal. But the little Giant-killer arrived just in time to save the possession, with Boston Scott running around the left side of the line for six points and Philly's first lead of the day.

The Mayor of New York punches it in pic.twitter.com/5fYPuC7lj3

Scott's career numbers against the Giants are relatively absurd, with eight of his 12 career touchdowns coming against the boys in blue. They needed this one badly, and with the Eagles finally out in front, a victory over this terrible Giants group felt inevitable at this point.

• Philadelphia's first-unit guys did plenty to impact this game on defense, but this game showcased the power of depth for the Eagles. Milton Williams has been sneaky good for the Eagles during his rookie season, making the most of limited opportunities upfront to put pressure on the quarterback and stop the run. And the aforementioned Avery, whose Eagles tenure is still widely considered a bust, had one of his best performances since joining the franchise, making several nice plays in space to get the Giants off of the field.

The Eagles just looked stronger and faster than New York for most of Sunday's game, something that held true at nearly every position. As soon as the offense looked even remotely competent, this game was over.

• You know the defense is having a good day when the words "Alex Singleton pick-six" are not just a fever dream while recovering from a few too many Citywides on Saturday night. If McLeod was the beneficiary of the defensive front on his interception to open the second half, he returned the favor to the linebacking core with his play on the ball early in the fourth, tipping the pass up for Singleton to grab and run with:

This was a second-half beatdown, but it should be noted that the defense was great for all four quarters. They kept this game close early, broke it open midway through, and put the final nail in the coffin late. Terrific performance from Gannon's unit.

• DeVonta Smith's footwork is absolutely immaculate, and I would argue is the driving force behind his success. It shows up in his route running, with Smith able to create separation out of breaks thanks to clean mechanics, and it certainly shows up along the sideline, where Smith has made a number of spectacular plays during his rookie season.

His latest was a terrific throw-and-catch from Jalen Hurts to Smith midway through the third quarter, a play that for some unknown reason was initially overturned and then put back under review by the officials, eventually landing on the initial touchdown ruling in the end:

A closer and slower look at the grab:

DeVonta Smith with an amazing play to stay in bounds! #Eagles #FlyEaglesFly pic.twitter.com/zeAB1r0rMH

Smith did it all in this game — he hauled in a deep throw with a terrific high-point catch, opened up routes for guys underneath, was involved as a blocker, caught a few intermediate throws, and ultimately came down with this score to put a cherry on top of his good day. The more involved Smith is, the better Philadelphia's offense looks.

(I'm not saying this to discredit the play, but there was a wave from Reagor while the ball was in the air that I thought was a fair catch signal in real time. Perhaps that was what allowed him to get the initial space he needed for the gainer, but credit to him for taking advantage of it either way.)

You never know what it's going to take for a player to break out of a slump and finally get on the right track. Perhaps this punt return is the dawn of a new day for Reagor, who had his best game as a receiver for the Eagles just last week. It's more likely he'll continue to be the guy he has been for most of two years, but dare to dream.

• I have no cynicism to offer on Lane Johnson's fourth-quarter touchdown. Seeing an offensive lineman get a chance to score is always a thrill, and you're not going to have an easier time scoring than Johnson had on this play:

This game was done and dusted by the time Johnson got a chance to score, so this was for style points as much as anybody else. This hasn't been the easiest year for Johnson, who was open about the mental health battle that forced him to leave the team early this year, and the touchdown had to feel even better for the whole group as a result of that journey, a reward for one of their best players as he continues to wage a silent fight in the background.

• Once again, Jalen Hurts and the offense looked much better in the second half. But if we are evaluating this kid in an attempt to think about what the future looks like, which is basically the entire point of this Eagles season, you simply cannot ignore that he routinely spends entire halves unable to make basic reads and throws.

Every component of bad quarterback play seems to pop up throughout these games with Hurts under center. There's a throw he forces into traffic that is either picked off or nearly picked off. There are fumbles on plays where he doesn't protect the football, other guys scrambling to bail him out for bad ball security. And then there are throws where he just outright misses wide-open targets as a result of locking in on one guy or area of the field, as Hurts did when he missed Dallas Goedert for an easy touchdown late in the first half.

Most of Hurts' big plays in the Giants win were on underthrown deep passes that either could have gone for more yards or were nearly intercepted because of where he placed them. As costly as some of the early drops were by his skill position guys, they made up for it by bailing him out of some really tough spots. I do appreciate his willingness to take chances downfield, which was a big problem for Carson Wentz later in his Eagles tenure, but you never really know what's going to happen when Hurts loads up to throw deep.

• Look at the list of quarterbacks the Eagles have beaten this year:

Not a single one of those guys is equipped to play in a shootout, save for maybe Ryan, whose best days are long behind him. Maybe it seems weird to focus on this when they ended up putting 30+ points on the board, but the style of game they are winning doesn't feel relevant to what it's going to take to win games against good opponents in the playoffs, and this group has a pretty good chance to make it as things stand. They won't have the luxury to turn it on in the second half for much longer.

• Curt Menefee wished the audience a Merry Christmas after returning from the commercial at half, and then immediately roasted the quality of the game: "If you like football played in the middle of the field, consider this our gift to you." That about sums up the game in one sentence, so I'm not sure why I even bothered writing a recap.

• A Giants player or coach (couldn't tell who) yelled at an official to, "Go back to Pop Warner!" among other colorful insults early in the third quarter. I can't say I blame whoever that was, because this crew was absolutely horrific on Sunday.