A first date guide to the Mütter Museum 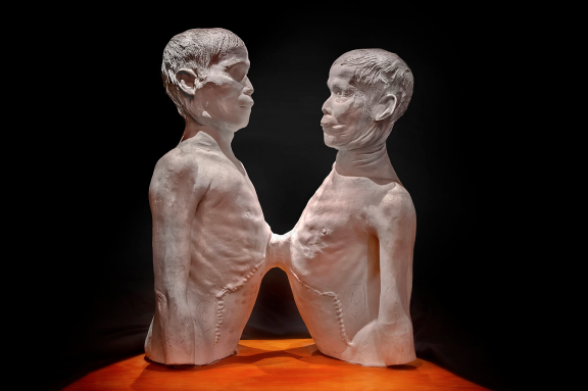 Death Cast of "Siamese Twins" Chang and Eng Bunker George Widman, 2009, for the Mütter Museum of The College of Physicians of Philadelphia

So you think you’ve tapped, poked, swiped or geolocated yourself someone special – someone with several layers of compatibility, or a fine profile pic. Or you have been set up by mutual friends who know you two will hit it off. And you think he/she/they is worth fastracking into a unique daytime excursion filled with skulls collected to debunk the racist rationales of phrenology, slices of Einstein’s brain and homage to Chang and Eng, the twins who put the "I and me" in Siamese?

Good for you. You’ve come to the right place. The Mütter Museum is housed in The College of Physicians on 22nd Street, between Chestnut and Market. It isn’t open for any late night excursions (yet), so you better plan on a daytime date.

You enter into the upper level, where, if your interests lean towards the salubrious, you can peruse the Ikea, maze-like exhibit on hygiene and death in Civil War Philly. Could make for a fine start--after all, unless you haven’t showered in a month and contracted leprosy in the meantime, your own coiffure--whether kempt or fashionably un-so-- will look stunning.

But the Mütter’s catalog of medical curiosities and deformities aren’t there just so you can feel biologically superior (or among your own kind). Use these opportunities to circumvent the typical get-to-know-you blather and delve into deeper levels of intimacy.

The slogan for the Mütter is, “Are you ready to be disturbingly informed?” If anyone knows a better slogan for the first date experience, please share. 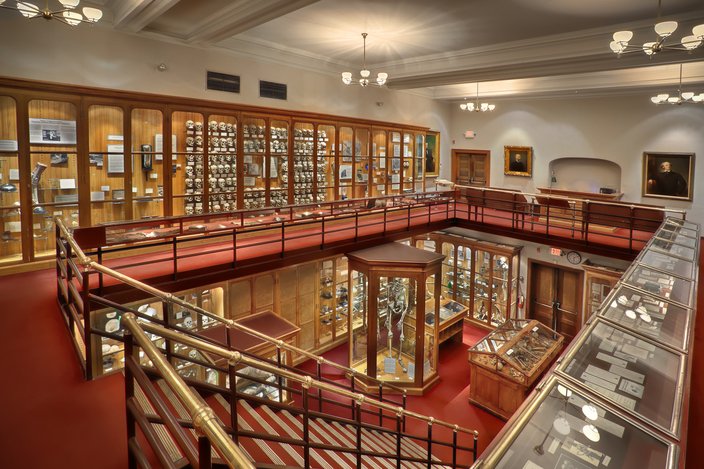 The main gallery of The Mütter Museum of The College of Physicians of Philadelphia.

Think of the fun to be had with the Hyrtl Skull Collection--139 skulls gathered to discredit the claims of phrenologists like Django Unchained’s Calvin Candie, who thought intelligence and personality could be predicted by the shape of the brain. Hyrtl inscribed many of the skulls with some basic details about its owner’s occupation and cause of death. For the priest who succumbed to septic, or the burglar who committed suicide during a botched robbery, or the religious zealot who perished as the result of self-imposed castration make up the life story that led to this miserable end.

After all, storytelling is a good way to learn of each other’s hopes and fears for the future, as well as reluctance or desperation when it comes to commitment.

And there is, of course, the Soap Lady, the mummified corpse of a woman who died somewhere in the 1830s. Because her body lay in a warm, moist environment, her fatty substances converted to adipocere--a waxy, soap-like substance. The Mütter even displays the sales receipt of this acquisition. Take your date-night selfie with the Soap Lady hovering in the background like the matronly chaperone to the best 8th grade dance ever. Post to Twitter: #FirstDateAtMutter. 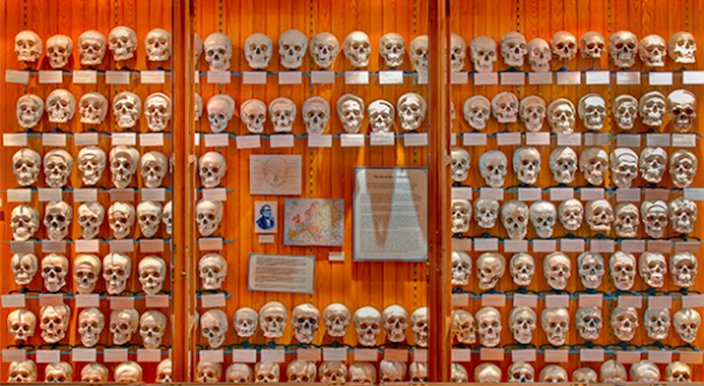 The Mütter Museum acquired this collection of 139 human skulls from Viennese anatomist Joseph Hyrtl (1810-1894) in 1874.

Head downstairs, past the comparative display of giant and dwarf skeletons, until you reach a large case reminiscent of an antique card catalog (from the days when libraries indexed their holdings on tiny cards). Welcome to the Chevalier Jackson Collection, an impressive assortment of objects removed from inside people’s heads. But as the collection lacks clear labels, you and your date have a chance at some friendly competition: Swallowed or snorted? That assortment of washers must surely have taken a ride up the olfactory, but that toy battleship? The 2½-in. screw had to have been swallowed, but can’t a person dream?"

And if the excursion is going well, and you are your date have found yourselves on a good vibe, venture forth to the tribute to Chang and Eng, these two gents who spent a good part of their lives gazing upon each other. And behold, there you’ll find their conjoined livers bathing in formaldehyde.

Let the moment thrill you. Take your date’s hand. Let that person know you are up for some conjoining yourself.