Ask Hickey: What's the deal with the swastika on a suburban firehouse? 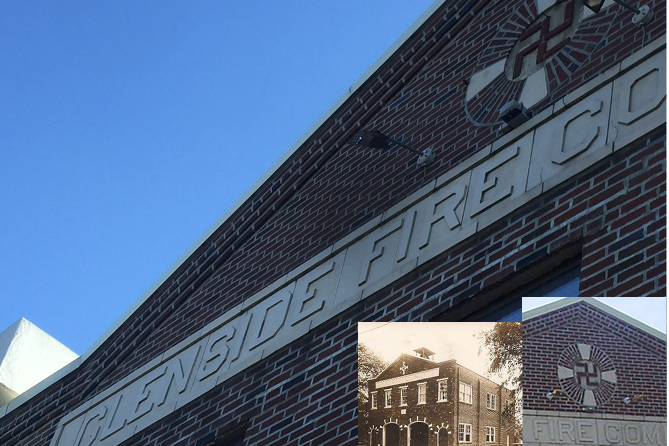 A symbol atop the Glenside Fire Station leaves some passersby thinking it's a swastika, but defenders say it's not that simple. (Inset photo of firehouse from Glenside Fire Company's website).

I’m curious as to when Glenside Fire Station is going to take down the swastika on their building. It's been there since the 1920s, so obviously it's not purposefully a swastika, but it also hasn't been taken down. – @Patchak21, via Twitter

A Nazi symbol on a building that houses those who serve their community?

Well, in a day and age when people are talking about Nazis again (particularly the merits of punching them), this warranted a closer look. So, I drove over to Glenside to get a look and – lo and behold – you weren’t kidding!

There really is a symbol that looks like a swastika on Glenside’s volunteer firehouse right across from the Regional Rail station.

While it hasn’t been a talking point lately, it was a point of contention back in the late 1990s and early 2000s.

A story in Philadelphia’s broadsheet newspaper noted that the swastika-looking decorative touch doubles as an “ancient symbol representing happiness, good luck and the wheel of life.”

Since the building was erected in the mid-1920s, and completed in 1927, you’re right: It’s not some sort of pro-Nazi sentiment.

Instead, firefighters of old viewed the Sanskrit svastika as a symbol of “good fortune” and "well being."

Sure, there was a petition effort to have it removed in the late 1990s as part of a candidate’s failed run for Cheltenham Township commissioner.

And sure, just the sight of it can trigger horrible memories for residents ... both Jewish and not.

When I caught up with folks from both the Anti-Defamation League and Jewish Community Relations Council (JCRC) this week, they said they were averse to reviving any controversy, much as they were 16 years ago.

Adam Kessler wasn’t the JCRC director when the issue first arose, but he is today.

He acknowledged that some “will be hypersensitive to perceived examples of anti-semitism,” but the backstory stands as evidence that that wasn’t the intention here.

“I am sympathetic to (those) who might have experienced the Holocaust and might walk down the street, see this and get upset,” he said Thursday. “After conferring with ADL, I don't see any change in our view on this.”

Agreeing with Kessler was Nancy Baron-Baer, the ADL’s regional director.

She said that not only, at the time of the firehouse's construction, was the symbol one of good luck, but that she’s been told there’s a superstitious benefit: The fire company has never lost a firefighter in the line of duty since they’ve been housed there.

“There’s a fear that if somebody did anything to it, the tides would turn,” she said. “It was all meant in a positive manner.”

On the contrary, she noted that the symbol discussion could be used “as a teachable moment,” courtesy of a plaque explaining what the symbol meant when the building was constructed and what it means to them as firefighters. Put it in historical context.”

And that’s exactly what Al Regenhard, president of the Glenside Fire Company, and Cheltenham Township Commissioner Drew Sharkey said a plaque on the front of the building does.

While it can’t be plainly seen from afar like the symbol atop the building, a six-paragraph “The Symbols on the Glenside Fire Company” goes into great detail to explain the imagery. 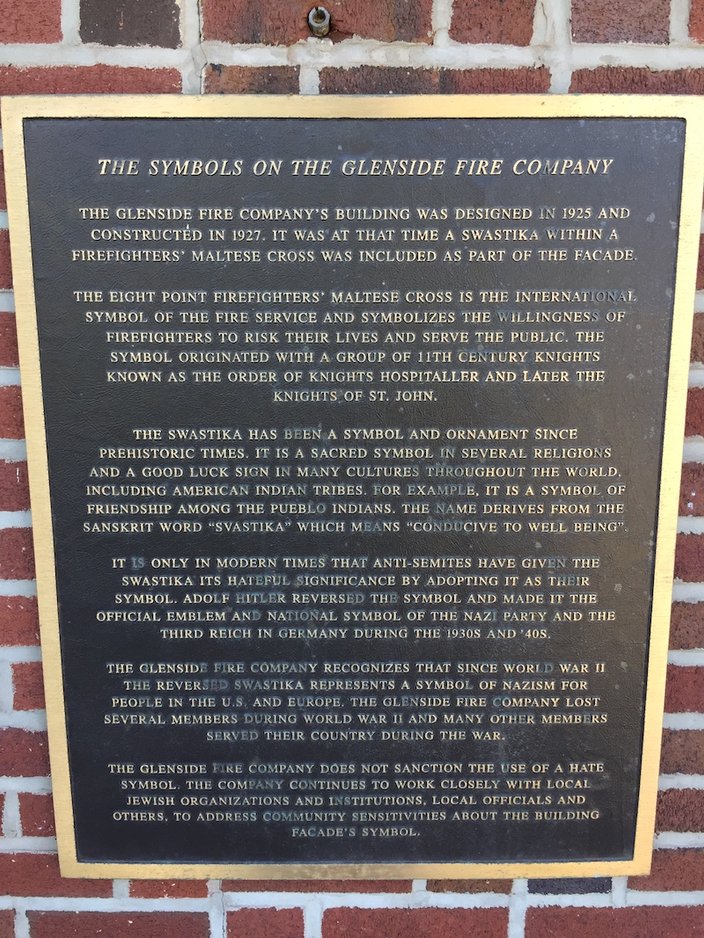 A plaque outside the Glenside Fire Station explains the imagery that some perceive as a swastika on the building that was built in the 1920s.

It starts off by noting that, in the 1920s, “a swastika within a firefighters’ Maltese Cross was included as part of the façade,” and that a swastika “has been a symbol and ornament since prehistoric times.”

Aside from the Nazi connotations, it was a “symbol of friendship among the Pueblo Indians.”

“Adolf Hitler reversed the symbol and made it the official emblem and national symbol of the Nazi Party and the Third Reich in Germany during the 1930s and 1940s,” it reads.

“The Glenside Fire Company does not sanction the use of a hate symbol," the plaque continues. "The company continues to work closely with local Jewish organizations and institutions, local officials and others, to address community sensitivities about the building façade’s symbol.”

For his part, Sharkey noted that "until your email today, no one has raised the issue directly, nor has it been discussed in my presence" for many years.

Noting that the issue itself was settled back in 2001, he used the inquiry as an opportunity to encourage residents "to volunteer at one of our five all-volunteer fire companies. The dedicated volunteers should be the focus of the story."

As for the second part of the question, I'm superstitious enough to buy into a good luck symbol having something to do with protecting the department's 117-year no-firefighters-lost streak.

For that alone, I think it's gotta stay.