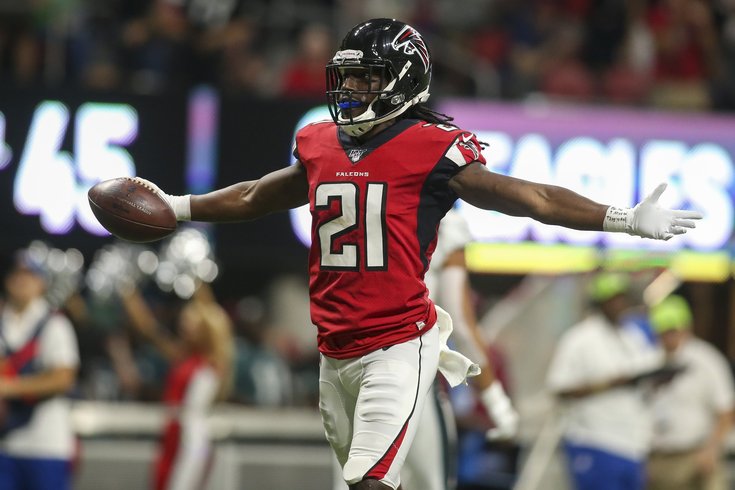 Atlanta Falcons cornerback Desmond Trufant (21) celebrates after an interception against the Philadelphia Eagles in the first quarter at Mercedes-Benz Stadium.

Struggling to get it going early once again, the Eagles head into halftime trailing the Atlanta Falcons, 10-6, and they will have to turn things around in the second half with their top receiving options potentially sitting on the sidelines.

Here's what I saw in a bad, wild first half for Philadelphia.

• The Falcons were making quick work of the Eagles on the opening series of the game, keeping them off-balance on play after play and looking like they were going to eventually waltz in for a touchdown. And then Brandon Graham came through Atlanta's defensive line like he was shot out of a cannon, forcing the Falcons into their first second-and-long and changing the complexion of the drive.

(Yes, he was definitely helped by poor Falcons blocking, but it was a difference-making play all the same.)

Graham would get pressure on the next play as well, leading to an Atlanta incompletion, and the Falcons would eventually have to settle for a field goal from 50 yards out. The Eagles needed someone to set the tone, and Graham came through.

• No better example of why Mack Hollins is on the team than we saw in the first quarter when he saved a punt from bouncing into Atlanta's endzone and pinned the Falcons deep. Not as sexy as a long touchdown catch, but those plays add up and win football games.

• Since I kill the Eagles whenever it doesn't work, it only seems fair to point out their "sticks" defense worked like a charm in the first half. Jim Schwartz's crew swarmed on the ball and wrapped up players in space, which will only make it more infuriating when this defensive style backfires in the near future.

It's a me problem, not an Eagles problem, I get it.

• Sidney Jones was one of the lone bright spots in the first half for Philadelphia, so it was only fitting that he made Philadelphia's biggest play of the half in the closing minutes. After coming up with some nice tackles in the open field on Julio Jones, he was in the right place at the right time when a pass came off of the hands of Mohamed Sanu, and it gave the Eagles a chance to score before the half ended.

• Philadelphia's inability to get anything going in the first quarter has been a storyline for over a season now, and it's not going away. They have yet to put points on the board in the opening period through their first two games, and that follows a season where they only scored 41 total points in first quarters.

It has continued this year, in this writer's opinion, largely because of conservative play-calling. Perhaps the underneath game and attempts to establish the run are the reason why deep shots have opened up later in games, but even then it feels like we're seeing far too many basic inside runs that amount to nothing.

And it's not just about play-calling, either. The Eagles simply haven't been sharp out of the gate either of the last two weeks, with misthrows from Wentz, drops from wideouts, and other basic mistakes plaguing the offense. There's no clear-cut solution to the problem, but it has to get fixed.

• The Eagles were up against an offensive line that they should have been able to bully big time. And in some respects, they did — outside of the opening series, Philadelphia mostly did a great job of beating them in the trenches on run plays, not allowing the Falcons to establish their rushing attack at all.

Their pass rush was a different story, and this mirrored their slow start against Washington up front. The big boys eventually got rolling in Week 1, so we'll see if the pressure eventually breaks through in the second half.

• Ronald Darby should thank his lucky stars that Matt Ryan is not very good, because he got torched on back-to-back plays that should have ended in Atlanta touchdowns midway through the second quarter. It took until the next drive for the dam to finally break, and he Falcons just kept picking on him.

Atlanta was eventually rewarded for their lack of confidence in his coverage abilities with the first touchdown of the game, a shot over the top to Calvin Ridley, and it felt inevitable based on how the game had gone up to that point. There's a strong case to be made that Schwartz should sit his butt on the bench for the rest of the game and turn to someone else, perhaps Avonte Maddox, but odds are that he'll continue to live and die with Darby. Doesn't seem like a great plan.

On the flip side, it made Sidney Jones look pretty good, which a lot of Eagles fans have been waiting and hoping for.

• Carson Wentz was just straight up bad in the first half. We can point to a few reasonable excuses for the performance, namely the loss of his weapons to injury, but he did little to nothing to help himself.

He did not look right after taking an early shot to the ribs in the first quarter, with his throws down the field thereafter coming up way short. The second interception he threw was an absolute duck into the arms of Desmond Trufant, and the throw was so bad it was hard to even tell who he was targeting on the play. Downfield shots weren't his only problem — he threw behind wideouts on several occasions, and it came at the cost of first downs.

Eventually, Wentz took a trip to the medical tent and Josh McCown came into the game to close the half, which seems to confirm that there's a health issue in play here. McCown was excellent in limited action, but obviously the Eagles need their franchise QB to be alright to get where they want to go.

(Why did Wentz come back in for the final seconds of the half with a possible injury and McCown cooking? This is all so confusing.)

• Health is not a catch-all excuse for their early struggles on offense, but the Eagles were hit with an absolute monsoon of ailments in the first half on Sunday night. Dallas Goedert picked up a knock during pre-game that kept him on the sideline, DeSean Jackson made a trip to the medical tent that was never really explained, and Alshon Jeffery missed a good deal of snaps as well, forcing guys like Hollins and J.J. Arcega-Whiteside into action.

It's hard to know how serious any of these issues are, but when two of your top weapons and your backup tight end are all having issues early, it's going to throw the offense into chaos.

(After writing the above section, Jason Kelce was ushered into the medical tent after reportedly walking to the wrong sideline after a play early in the second quarter. NBC inexplicably didn't show the replay of that happening with Kelce, which is some real "protect the shield" BS.)

• I feel like a broken record on this but it really would be nice for Daeshon Hall to be active, let alone on the field playing. At least this week we saw Josh Sweat get to the quarterback, which takes the annoyance factor down a notch.

• Was Rasul Douglas guilty of pass interference on the play Dan Quinn challenged midway through the first quarter? The refs didn't think so, and I agreed. Douglas used just enough physicality without crossing the line on Julio Jones.

But the fact that we have to be subjected to these replays because Sean Payton and the Saints are a bunch of whiners? Brutal.

• Nelson Agholor getting sent off with eight seconds left in the half was just the perfect cherry on top of a poop sundae.

Michelle Tafoya reporting "it's been nuts" on the Eagles sideline as players are dropping like flies.