From spicy to downright strange 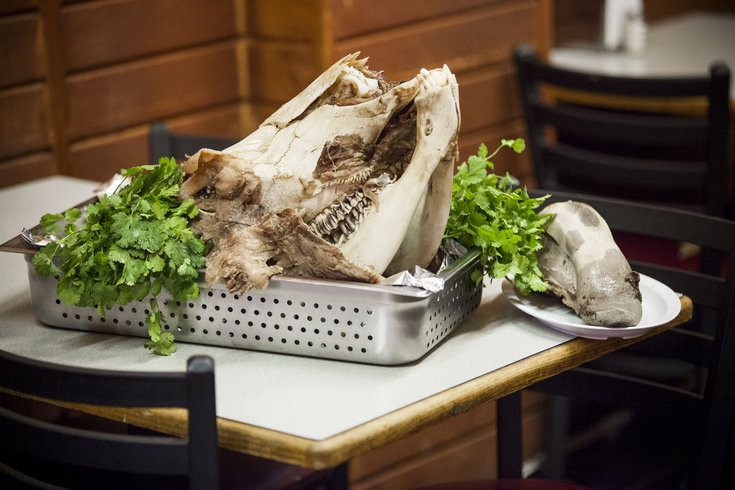 Nothing spices up life like a taste of adventure.

Philadelphia might be best known today for its cheesesteaks or its perfection of classics at trendy restaurants, but that doesn't mean you won't also find a few intrepid cooks who dare to make dishes that are strange, super spicy or that simply shake our perception of what makes a food "normal."

Below, find five meals in Philadelphia that will make you feel like the Indiana Jones of food. These are the dishes that raise eyebrows, sizzle the tongue and, for some, summon questions of how anyone could possibly have missed out on eyeballs, grasshoppers and gator for so long. 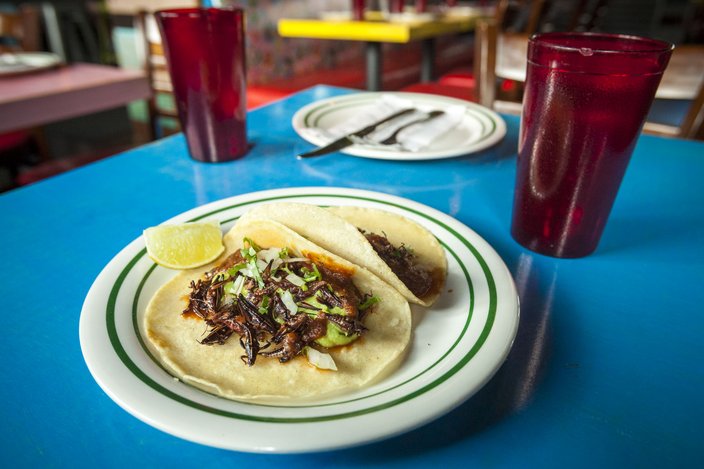 The tacos de chapulines from Taqueria Feliz consist of crispy grasshoppers with onion, cilantro and guacamole, served with a lime. Thom Carroll / PhillyVoice

"It's like a sunflower seed," Kelly Fink, general manager of Manayunk's Taqueria Feliz, told PhillyVoice. "It's crunchy, but a little salty as well."

The grasshoppers, procured from a supplier in the Italian Market, are served fried with no salt or seasoning. But do expect a mild kick from what they're served with: The taco boasts salsa that is made from dried chilis and guacamole made with jalapeno. The dish isn't spicy, per se, but it is a blast of competing peppery flavors -- and, to be sure, it's also undeniably buggy.

"The first thing people ask about is the texture, and you can tell it's an insect you're eating,” Fink said. "We don't dress it up or disguise that for anyone."

So, yes, expect a bit of a crunch.

The two tacos de chapulines, which Fink recommends as an appetizer or light meal (they're a bar snack in Mexico), are loaded with about 15 to 20 grasshoppers per taco. The restaurant keeps the dish as a staple on the "Funky Stuff" portion of its menu.

Word of advice: Stock up on dental floss. You'll need it when you find a leg or two nestled between your teeth the next day. 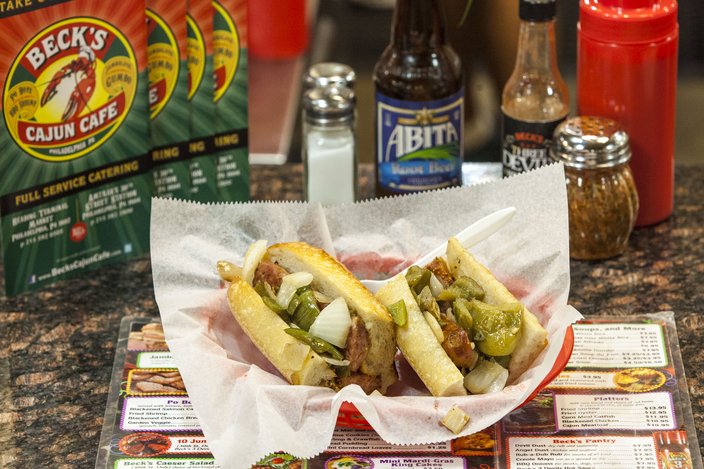 Beck's Cajun Cafe is a prime example of Reading Terminal Market bringing authentic dishes from around the world to its headhouse. Not uncommon in New Orleans, the alligator is turned into a rich sausage and then grilled -- though, Beck's Deborah DiPinto said some visiting New Orleans natives ask for it to be fried. (A request they seldom fill, she noted.)

The gator, ordered from Metairie, Louisiana, is neither chewy nor fatty and has a "smooth" texture with a taste that lingers lightly on the palate.

Indulgers should also know that it's not actually a member of the seafood family, tempting as it may be to label it as one.

"We have some customers come in and ask if it's fishy-tasting, which it’s not at all," DiPinto told PhillyVoice. "We also have plenty of people ask, 'Is it really alligator, or are you just saying that?' And yeah, it really is."

Not feeling up to the sandwich setup? Try the alligator gumbo instead. 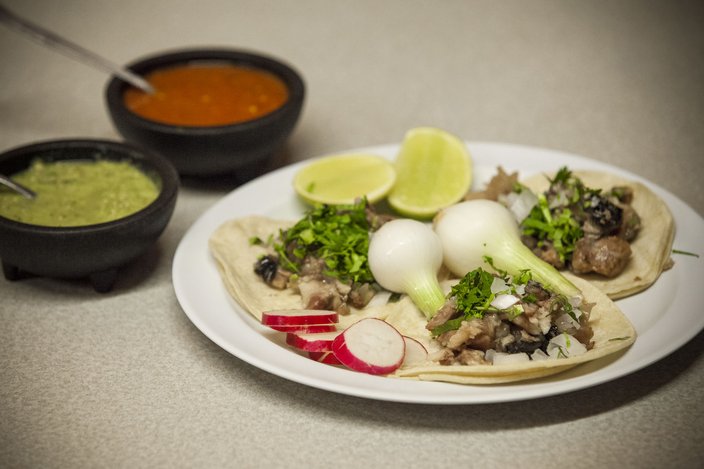 Carved out of a beef head (pictured above), these eyeballs are boiled for three hours before being seasoned with garlic, onion, salt and a handful of herbs. They're then sliced and served with cilantro, lime, cucumber, radish and a mild salsa.

The flavor of the eyeballs, Los Taquitos de Puebla owner Juan Carlos Romero explained, is especially salty and comparable to bone marrow -- often described as a delicate balance between butter and beef. Its texture, as you could imagine, is chewy.

It's valued as a dish you won't exactly find inhabiting the assembly line at Chipotle.

"You can find al pastor or chicken tacos around [Philadelphia] no problem, but not this one," Romero told PhillyVoice. "The eyeballs taste good, but I think people sometimes don’t want to eat it because it’s an eyeball. I ask customers and they’ll say, ‘Oh, no thank you! No taco ojo!’ Just the name, they don’t want it. But the eyeballs taste good -- they’re missing out on the flavor."

Want to be extra adventurous? Try the beef head taco, which consists of cow tongue, cheek and -- you guessed it -- eye. 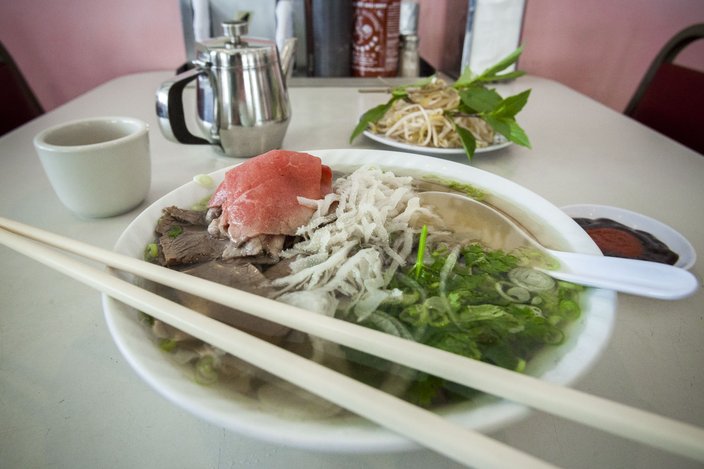 You know you're onto something adventurous when Anthony Bourdain pops by.

Tripe pho is a traditional dish from North Vietnam, seen as comfort food. Tripe itself, or cow stomach, is fibrous and has a rubber texture that's not unlike calamari. That texture, waitstaff at Pho 75 explained, is what makes tripe pho one of the restaurant's more adventurous dishes, and one that "not too many Americans will order."

On its own, the tripe -- which is boiled -- is practically flavorless. Combined with the pho, however, it takes on the fragrance of the beef stock and its accompanying spices.

Tripe pho is recommended as a meal for any time of day. So, skip the eggs and bacon one morning and opt for a tripe pho breakfast instead. 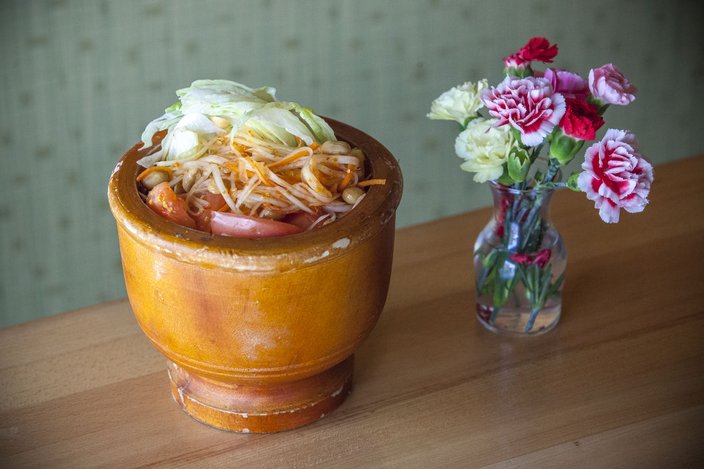 There's a reason Northern Liberties' Circles Thai has been hosting a series of "Thai Tapout" events this summer: Their version of a medium-level hot makes even the most spice-immune whimper. Try the "Thai Hot" version of their papaya salad, and you'll understand why so many participants give up by the fifth course of the challenge. (And why Circles is so unafraid to offer a free meal to anyone who finishes that final course.)

But there's something special about Circles' papaya salad that makes it a challenge for diners who love a little pain in their dining experience. The common thought being this: How can something made with papaya be spicy?

"What's unique about the papaya salad is its combo of fruit and spices. People don't realize it's not easy to tame 'spicy,'" PJ Williams, general manager for Circles Thai, told PhillyVoice. "It's not like a curry, which has coconut milk that eases the intensity of the spice. ... Traditionally, it's a spicy salad. No one orders it 'mild' in Thailand."

The point being, you're getting the full effect of the chili peppers spread over the fruit and veggies with not much else to dull the raw heat.

If you're looking for the authentic Thai papaya salad experience, ask for anchovies to be mixed in. As long as they have them in stock, Williams said, they'll oblige.

And, of course, ask for water. Lots of it.

"A lot of people aren't prepared for what 'Thai Hot' brings," Williams said, smiling coyly. "I like to write 'Good luck' on their dish."