Five Eagles players who shouldn't be back in 2016: Offense edition 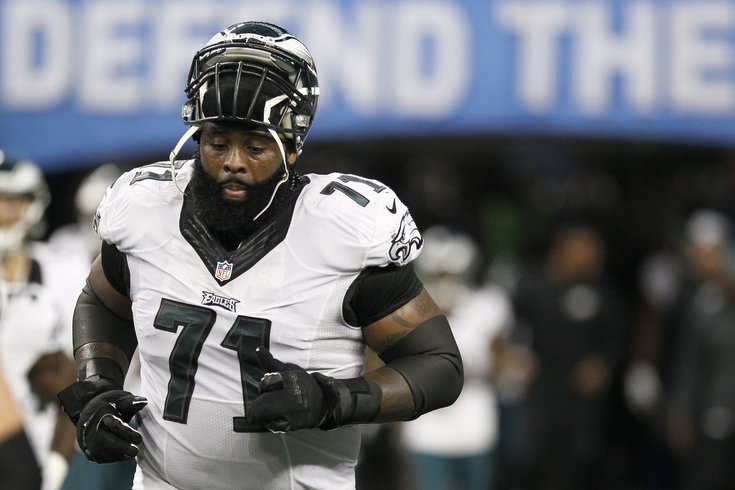 If the Eagles are realistic about their Super Bowl aspirations next season (they shouldn't have any), it may make sense to try to trade Jason Peters.

With the fallout of a 4-7 season that could continue to get worse, it is the norm that roster changeover will occur. Below are five Eagles players who should not be on the 2016 roster (at their current pay, anyway), although not necessarily a list of who will not be back.

QB Sam Bradford: In Bradford's case, even if the Eagles want Bradford back (they shouldn't, but may), I'm not sure why Bradford would want to be back playing behind an old, porous offensive line, throwing to receivers who can't catch. On a side note, Mark Sanchez isn't worth the $5,500,000 million he'll count for on the cap next season, but that's certainly more palatable than the inflated and unjustified number Bradford and his camp will be looking for.

LT Jason Peters: Peters turns 34 in January and is currently the third-oldest offensive lineman in the NFL. While Peters has had a tremendous career and is a borderline Hall of Fame talent (he isn't getting in), his career is clearly in decline and he has experienced multiple injuries of the "nagging" variety this season. In 2016, he'll count for $9,300,000, of which the Eagles can save $6,300,000 by releasing or trading him. If the Eagles are realistic about their Super Bowl aspirations next season (they shouldn't have any), they could try to find a trade partner that is a legitimate contender in need of a tackle. They wouldn't get a ton for him, but with a large number of holes to fill, every lottery ticket counts.

WR Riley Cooper: In February 2014, Cooper signed a five year extension worth $22,500,000, and for that the Birds sure did get themselves some super-terrific blocking. They obviously haven't gotten much catching and running, as Cooper has averaged 31 receiving yards per game in the 27 games he has played since signing his deal. This next offseason is the first opportunity the Eagles will have to save money by shooting Cooper into the sun releasing Cooper, whereas in the past it would have cost them more to cut him than keep him. If the Eagles cut Cooper, they will save $2,900,000. Fare thee well, Riley.

WR Miles Austin: At least Austin's contract was only for one year, but it was among the dumbest one-year contracts the Eagles have ever given. Austin was old, injury-prone, useless on special teams, and just all around bad. And that was before the Eagles even signed him to a $2,225,000 contract, with $1,000,000 guaranteed. They did so when the rest of the league seemingly had zero interest in him (it was several weeks into free agency when the Birds inked him), and actually gave him a raise compared to his pay the previous year. If you're in the "Chip the GM doesn't know what he's doing" camp, this is the prime contract to point to.

TE Brent Celek: At $4,800,000 this season, Celek is the 14th highest paid tight end in the league, but only 25th among tight ends in receiving yards. A year ago, he was 26th. Next season, Celek will be 31 years old, and will count for $5,000,000, all of which the Eagles can save if they release him. While Celek is the Eagles' best blocking tight end, $5 mil is simply a figure that is not justifiable at this stage of his career.