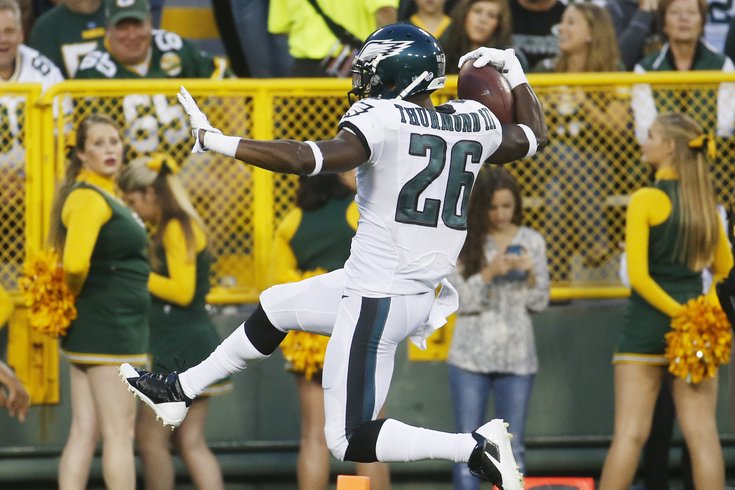 Walter Thurmond has shown the ability to make big plays on the back end.

One of the noteworthy things about the Eagles' training camp and preseason performances is how much better a number of players have looked in comparison to previous seasons. Below are five players I believe will have breakout seasons for the Eagles in 2015.

Logan has been an absolute beast this preseason. In case you haven't seen Logan's play in gif form, go now. Here's a taste:

Chip Kelly agreed that Logan looks like he has made a big jump this season. "Bennie's really been a disruptive force in the run game for us," said Kelly. "I think he's been difficult to block in all three of these preseason games, causing a lot of havoc, getting penetration in the backfield, disrupting the timing of plays. I think he has played really well, maybe playing as well as anyone on the defensive line right now."

In his detailed game review against the Ravens, Tommy Lawlor of IgglesBlitz.com noted that Brandon Graham has looked really good dropping into coverage:

I continue to be amazed at how much better he looks at covering now than last year or certainly 2013. Different player. Not only is he effective, he looks almost natural out there at times.

I agree. And because Graham has proven he can be functional in that regard, while also being very good setting the edge against the run, he's not going to come off the field much. That is going to lead to far more opportunities to get after the quarterback than he has gotten in the past, and I think he'll capitalize.

Matthews is coming off a great rookie year that was almost lost to some degree among the great seasons turned in by several of the wide receivers in the 2014 rookie class, like Odell Backham Jr. In 2015, I think Matthews is going to be special. In the first three preseason games, Matthews quietly racked up 7 catches for 115 yards, while making it look routine. There may not be a slot corner in the league that can cover him for 60 minutes. Matthews could put up crazy numbers this season.

I'm buying in. Thurmond has more than looked the part as a safety opposite Malcolm Jenkins this preseason, and he may give the Eagles their first pair of good safeties in a long time. Thurmond isn't a guy who is going to light up many receivers going over the middle, but his cover skills are obvious, and he has shown the ability to make big plays.

Bradford was kinda-sorta having a breakout season in 2013 before his tore his ACL the first time, but he never has established himself as a really good quarterback in the NFL. Obviously we all saw what he did in Green Bay, when he threw 10 perfect passes.

In this offense, barring injury, Bradford has the potential to be great.