Matt Barkley vs. Tim Tebow: Round 3

Against Packers, neither QB did much to improve his chance of making roster 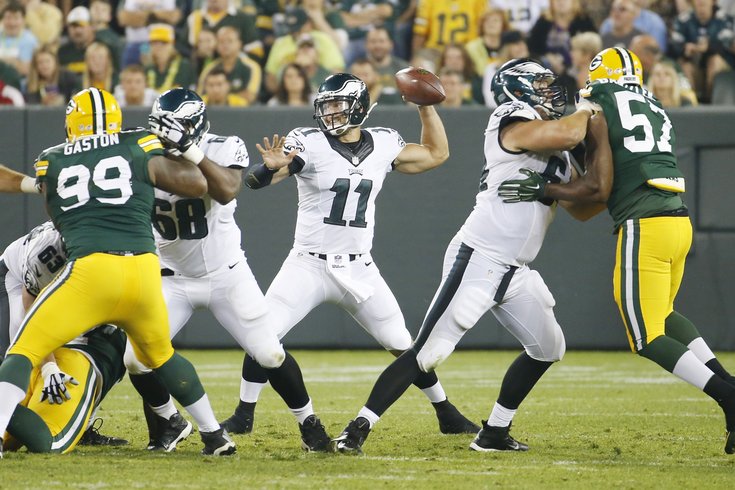 Tim Tebow drops back against the Packers.

It's a good thing neither Tim Tebow nor Matt Barkley is competing for the Eagles starting spot.

One of the benefits of Bradford's strong performance was that Chip Kelly felt he'd seen enough from his new quarterback after just one quarter, which allowed for more playing time for Barkley and Tebow. Originally, it seemed like Bradford would get the first half, Sanchez the third quarter and then the other two would split up the fourth.

Instead, each got basically a quarter of work. But it still wasn't enough to separate the two.

Barkley, who started the third, failed to make a first down on his first two drives, going three and out both times. On his third drive, which carried over into the early part of the fourth quarter, the former USC passer finally got a first down, but that would be all as the team again had to punt the ball away.

He finished with just 12 snaps for the game and was on the field for about three and a half minutes of actual game time. Barkley failed to lead the Eagles on a scoring drive for the first time this preseason and threw for just 28 yards on 5-of-9 passing.

All along, it seemed like a logical spot -- any short yardage situation, really -- to see if Tebow could bring something to the table that Barkley just physically couldn't. Unfortunately for all the Tebow fans out there, neither conversion attempt was successful; the first ended with Tebow being stuffed on a run up the middle and the second was an incomplete pass intended for Nelson Agholor Packers CB Casey Hayward.

After the game, Kelly said it was just something that he wanted to try, but that was with kicker Cody Parkey unavailable with a leg injury (nothing serious, though). After two failed attempts, however, Kelly ceased going for two and instead opted to have backup kicker/punter/knuckleballer Kip Smith give it a try. He didn't have any more success initially, missing the first one, but bounced back to make his final three tries.

Although Tebow didn't lead any scoring drives for the Eagles -- also a first this preseason -- it wasn't really his fault. At least not entirely. Tebow was only out there for two drives so he didn't have much of a chance. The first gained 21 yards but ended in a punt. It also included a botched handoff, something we've seen from him before this preseason, but Tebow was able to recover.

His second drive, which was only stopped by the game clock expiring, gained 23 yards -- including a five-yard run by Tebow. In all, he finished just 2-of-2 for 15 yards to go with three rushes for four yards.

Here's a drive-by-drive look at how the two performances against the Packers compare, plus a look at their numbers so far this preseason:

Clearly, there was not enough of a sample last night for either quarterback to greatly improve, or harm for that matter, his chance of making the team. Tebow's failed conversion attempts may be the one thing to take away from the game, at leas as far as the battle for the No. 3 QB spot is concerned. If Chip was hoping to use that as one of the deciding factors in his final decision, he couldn't have liked what he saw from the former Gator in Green Bay.

But there is still one game to be played, and could very well be the decisive round.

With Bradford likely to sit out the final preseason game against the Jets, both Barkley and Tebow will likely see extended action. And since neither has done enough to earn the job so far, their final impression on their coach may be the one that matters most.