All 10 of Sam Bradford's throws against the Packers, in gif form 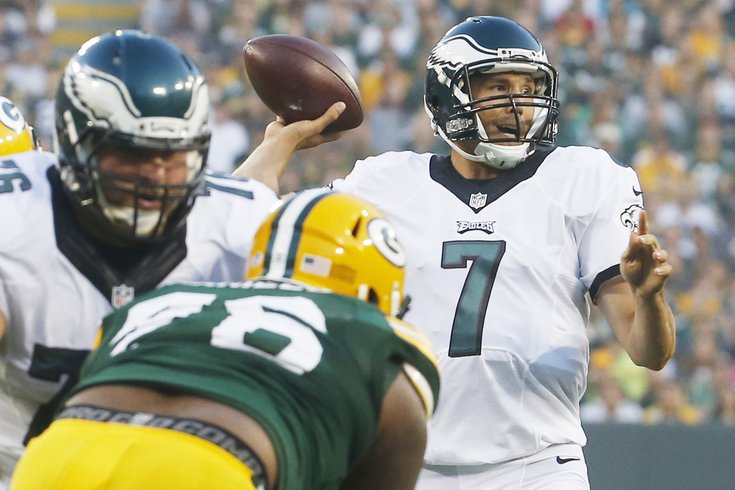 Sam Bradford was so good last night he scared himself.

Last night against the Packers, Sam Bradford was 10 for 10 for 121 yards (12.1 per attempt), with three touchdowns, no interceptions, and a passer rating that somehow wasn't perfect, at 156.7. Let's relive Bradford's night, in gif form.

MORE EAGLES: Matt Barkley vs. Tim Tebow: Round 3 | Eagles trim roster to 78 | Handing out 10 awards from the Eagles-Packers preseason game | Sam Bradford perfect as Eagles jump out to big lead over Packers

• Throw #1: Easy one off the bat. Little swing pass to Murray. Get that rhythm going, Sam.

• Throw #2: Another easy one. Bradford looks right, then comes back to the left for the called screen. Rhythm... building.

• Throw #3: Oooooh, now we're talking. Bradford is money on his touch pass on a wheel route to Sproles. 6-0.

• Throw #4: You can't see exactly when Jordan Matthews cuts to the corner here, but my guess is that the ball was out before his break. This ball is on the money to Matthews against one of the better nickel corners in the NFL, Micah Hyde.

• Throw #5: The Eagles run a crosser in which Hyde has to fight through traffic to stay with Matthews. This play destroys man coverage. Easy pickings for Bradford.

• Throw #6: Bradford reads the Packers' zone coverage, Miles Austin sits down in the zone, and Bradford drills it in to him. If Austin reaches the ball out, this is a TD.

• Throw #7: Bradford sees the Packers defender sprinting across the formation following Nelson Agholor (who is in motion), so he reads man coverage. It looks like he initially wants Mathews out of the backfield, but that's covered well, so he quickly hits Burton on the shallow crosser. What I love about this throw is that Bradford decides to release this pass before Burton's man gets washed up in the trash created by Riley Cooper and Brent Celek running crossers in the opposite direction. He's knows that it's going to happen and throws to a spot where Burton can get to the ball but the defender cannot.

As a bonus, Bradford hung in there on this throw, took a hit, and bounced back up with a fist pump. Fiery Sam!

• Throw #8: Easy throw here, but I like Bradford's patience to wait for Sproles to clear the linebacker before he lets it rip.

Here's another angle that shows that Bradford put this ball in a perfect spot by using Matthews' height to his advantage.

• Throw #10: Brent Celek runs to the back of the end zone, and Bradford hits him. Good read, easy throw once he trusted what he saw.

10 throws, all of them on the money. Bring on the regular season.