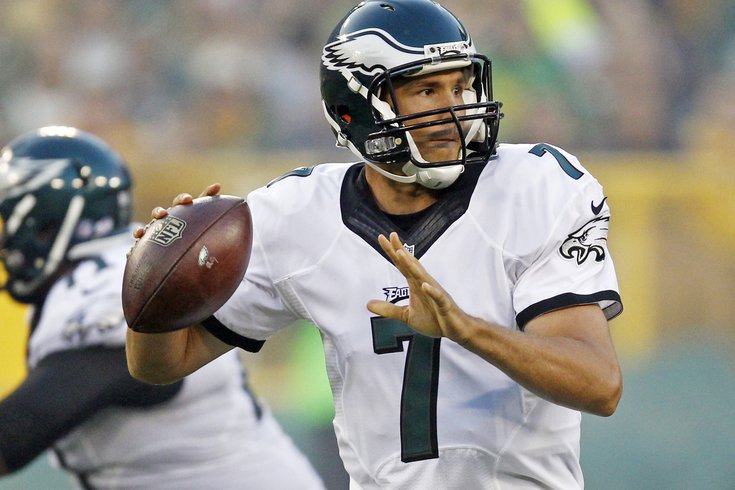 Sam Bradford drops back against the Packers. Spoiler alert: It's going to be a completion.

Yes, you read that headline correctly. And no, that's not me editorializing.

Eagles quarterback Sam Bradford was statistically perfect in his first extended action of the preseason against the Packers. He didn't play the entire first half like many expected, but that was because after three drives, three touchdowns, and no incompletions, head coach Chip Kelly had seen enough.

Bradford was 10-of-10 passing for 121 yards and three touchdowns. The only spot in which former Heisman winner wasn't perfect was his passer rating, which was 156.7, just shy of the top possible rating of 158.3.

It was just about the numbers, however. The Eagles made it look beyond easy as they surgically picked apart the Packers defense. They needed just 19 plays and six minutes, 50 seconds to gain 152 yards and score three touchdowns.

They also had their way on the ground. All three running backs had multiple touches in the first quarter. DeMarco Murray had six carries for 28 yards, as well as a pair of receptions for 12 yards. Ryan Mathews had two carries for three yards while Bradford was out there -- he finished the first half with seven carries for 22 yards and two catches for 12 yards. Darren Sproles didn't get a carry in the first half, but did have a pair of receptions for 41 yards and a touchdown.

As for their quarterback, Bradford displayed perfect touch on nearly every pass, including the aforementioned TD to Sproles, his first of the game:

His second touchdown pass wasn't nearly as pretty, but it was a great example of Bradford hanging tough in the pocket, progressing through the reads, finding the open receiver, and taking the hit. In this case, his target was tight end Trey Burton:

Sam Bradford 2 TDs in 7 minutes playing time in first quarter. Takes a shot and pops back up. #Eagles pic.twitter.com/RTpA1eKU1U

Bradford's final pass of the night, a seven-yard strike to tight end Brent Celek, showed his arm strength and accuracy. It was a laser right over the middle:

It's interesting that none of Bradford's scores came on passes to wide receivers (two TEs and a RB), but that didn't mean they weren't involved in the Eagles' offensive burst early vs. the Packers.

Here's a look at the rundown of Bradford's 10 completions:

As you can see, it was impressive enough that Kelly didn't feel the need to bring Bradford back out for the team's fourth drive early in the second quarter. By that point, the Eagles were already up 25-0 -- you can attribute the odd-looking score to a pair of Tim Tebow failed conversions and a missed extra point by Kip Smith -- and there was no sense in trotting him back out there.

And the best part?

Oh yes -- there wasn't another Suggs-esque hit on Bradford. You can rest easy, at least for another week or two.

DEFENSE GETS IN ON EARLY SCORING

Walter Thurmond III got his second interception in as many games, and took this one to the house, 28 yards for a touchdown. The score put the Eagles up 18-0 just eight and a half minutes into the game.