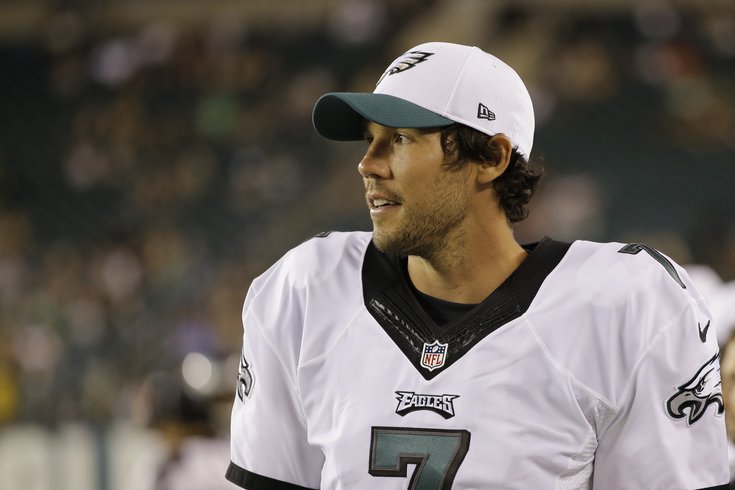 How long before Sam puts on the baseball cap tonight?

The third preseason game is the "dress rehearsal game," and the best look at the Eagles' starters that we'll get before the regular season begins. Unfortunately, it doesn't appear as though Aaron Rodgers will play much, if at all. He would have been a great test for the Eagles defense. Still, there's plenty to watch tonight. Here are five things I'll be watching.

Well, maybe extended action. Chip Kelly did not commit to how much he wants Sam Bradford to play, but the general rule of thumb is that starting quarterbacks typically play into the second half of the third preseason game. Bradford passed some tests last week, and most importantly, he didn't die. This week, we'll have a closer eye on his mobility and accuracy.

The trio of ILBs

Kiko Alonso, DeMeco Ryans and Mychal Kendricks all sat out the first two preseason games. Tonight could be the first glimpse Eagles fans get of Kiko Alonso. If Alonso and Kendricks both play, we'll see the Eagles' impressive front seven out there as a full unit for the first time as well.

The Eagles' shift in personnel in their nickel defense

According to Martin Frank of the Delaware News Journal, the Eagles have been using Eric Rowe on the outside in the nickel defense and kicking Carroll inside to the slot.

Eric Rowe said Nolan Carroll has been in the nickel this week, and Rowe goes to the outside w/1st team in those situations. #Eagles

This is the correct approach, in my opinion. Rowe's skill set does not fit the slot well. He'll be far more effective playing on the outside, where he can use his length and physical play to jam receivers at the line. The Eagles are better served moving Carroll into the slot, or simply using one of the other slot corner contenders (Jaylen Watkins, E.J. Biggers, etc) in that role.

It would appear that the starting five along the line will be (from left to right) Jason Peters, Allen Barbre, Jason Kelce, Andrew Gardner, and Lane Johnson.

Behind the starters, Matt Tobin and David Molk look like locks to make the team as reserves, and then it's anyone's guess. Will Dennis Kelly stick with the team again? Will John Moffitt finally shake off the rust? Has undrafted free agent Malcolm Bunche impressed enough against third- and fourth-team defenses to force his way in? The next two games (perhaps even more so in the fourth preseason) game will determine that.

If the running backs play the entire half, we'll get our first real look at how the carries are split between DeMarco Murray and Ryan Mathews. In my opinion, Mathews has looked tremendous and has made an argument that it should be something close to a 50-50 split.