10 over/unders for the Eagles' third preseason game vs. Packers 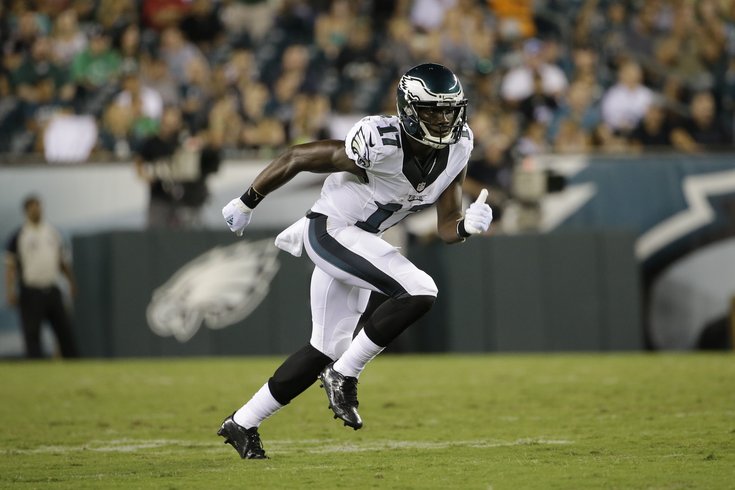 Eagles wideout Nelson Agholor is the only player on the team with a receiving touchdown this preseason.

One of the things I'm going to be doing throughout the Eagles season is posting some over/unders the day before each game. They won't all be serious, but that doesn't mean they are any less likely to happen.

Feel free to leave your predictions -- especially if you disagree with me -- in the comments (as well as post your own O/U prop bet ideas down there) and each week, when I post my new lines, I'll also give a shout out the winner* from the previous week.

*You don't actually win anything. Sorry.

Bradford played just one drive in his first preseason action against the Ravens and was able to bounce back from a Terrell Suggs hit -- have you heard about that one yet? -- to lead the Eagles to a touchdown.

On Thursday, Chip Kelly wasn't willing to divulge how much his new quarterback will play, if at all, but reports suggest that he'll play the first half. The Eagles are averaging 79.5 offensive plays per game so far this preseason, so that number may seem a little low. But if the Packers offense -- which is already down a Jordy Nelson and will reportedly be without quarterback Aaron Rodgers -- can manage to stay on the field, unlike the Colts and Ravens, the pace may slow slightly, bringing the Eagles snap count down with it.

Still, I think Kelly wants to see as much of Bradford as possible so that he can sit him in the preseason finale against the Jets and still rest easy.

TDs scored by the Eagles offense: 3.5

The Eagles offense scored three offensive touchdowns in each of their first two preseason games. With the starters expected to play more snaps this week, I could see that number going up.

However, it also means they'll be facing more Packers starters on the other side of the ball, so I think they score three touchdowns again this week.

Bradford wasn't sacked last week, but he was hit twice in his only drive of the game. If he plays three times as many snaps this week, it would only stand to reason that he spends slightly more time on his back against the Packers. I'm going to say the actual number is closer to three or four, although I could see him reaching that number without taking a hit as fierce as the one from Ravens DT Brandon Williams or as dangerous as the one from Suggs.

The Eagles were the only team in the NFL last season with multiple return TDs on both kickoffs (2) and punts (2; tied with Packers, Rams) and led the league in both categories. In fact, there were only two other teams (Bills, Chiefs) that had at least one kickoff return and one punt returned for a touchdown. And Barner wasn't even on the team -- he was on the practice squad after being injured in the preseason finale.

I'd like to see him go three-for-three and get another Saturday night, but it would be hard to bet on that.

The Eagles defense is tied for the league lead this preseason with six turnovers (4 INT, 2 FR), or three per game. This will be their first road game of the summer, so I'm going to take the under here, even if Rodgers doesn't play much. I still think they get multiple takeaways, just not three of them. I should've just said two...

If this was December, maybe I'd take the over here. But the weather shouldn't be a big issue at Lambeau, as the rain Kelly alluded to on Thursday should be long gone by then. I also think his struggles this preseason have been random and don't signify a sophomore slump for the 2014 Pro Bowler.

Don't let me down, Cody.

Las week we saw Kip Smith take over the kicking duties in the second half. It was ... something else. Kelly compared him to Tim Wakefield after the game. He's a punter by trade, but the team wanted to give him a chance in meaningless preseason games. I wouldn't be shocked if you see him out there in the second half against the Packers. Whether or not the kicks actually go in, that's a different story.

Who will we see more of on Saturday night? The answer may have more to do with how the game unfolds than any design by Kelly. So far, each has played a quarter in both of the Eagles games. But the minutes may just not be there.

If Bradford plays the first half and Sanchez plays the third quarter, that would leave just 15 minutes to be divided by the two guys competing for the third QB spot. If Barkley goes in first, and has a long, time-consuming drive and the Packers follow with one of their own, Tebow may not have much time left.

I think this roster battle will be decided in the final preseason game, but as for game number three, I think Barkley gets more snaps.

Agholor has been by far the Eagles most productive receiver this preseason. In two games, the rookie wideout has seven catches for 106 yards and a touchdown. He's the only wideout to have scored and leads the team in receptions and yards. He could have even more, but so far this preseason, most of the passes thrown his way have been from Mark Sanchez and Matt Barkley, neither of whom has the accuracy or strength of Bradford.

I think those two could have great success together this season, and maybe we'll get to see a glimpse of that against the Packers if Bradford gets the extended playing time he desires.

I'm really hoping it's the under, as the Eagles have already suffered two torn ACLs this offseason -- JaCorey Shepherd and Travis Long -- and the Packers just lost Jordy Nelson to an ACL in their last game.