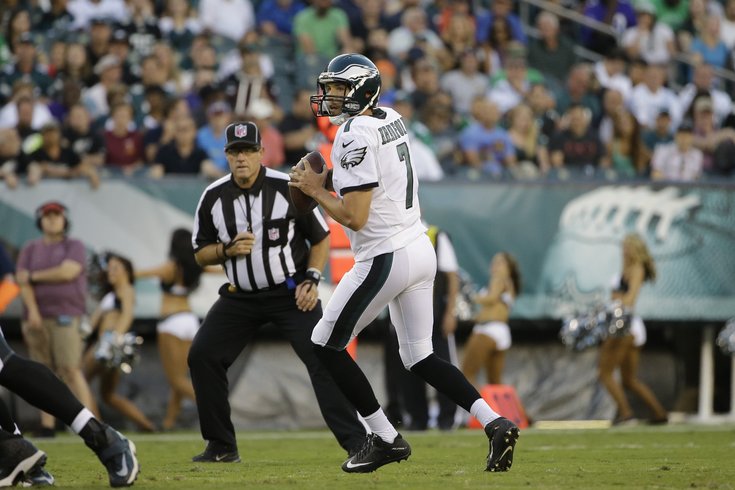 Quarterback Sam Bradford looks for a receiver during the Eagles' second preseason game against the Ravens.

After an interception by the Eagles defense on the Ravens' opening drive, Bradford entered the game for the first time since tearing his ACL (again) last preseason. And thanks to a methodical 11-play, 84-yard drive, which ended in a 14-yard Ryan Mathews touchdown run, it was about as good of a debut as fans could have hoped for.

On the drive, which was his only one of the game, the former Heisman winner and No. 1-overall pick was three-for-five for 35 yards. He also got some help from two other new members of the Eagles, running backs DeMarco Murray -- also making his preseason debut -- and Mathews. They combined for 29 yards on the drive, with Murray's 15 yards coming on four rushes, while Mathews' only carry was the 14-yard score. Darren Sproles also added five yards on the ground (plus one reception for eight yards).

It wasn't all great for Bradford on the opening drive, as he twice looked out of sync with his receivers, first on the pass to Agholor, and again on the incompletion to Ajirotutu.

Overall, however, it was exactly what you want to see from a QB who hasn't played in 364 days.

He even took a few hits -- three took him to the ground, by my count -- including a vicious late hit by Suggs.

Here's another, more legal hit that probably made fans feel just as nervous. I'm also pretty sure it's the one Bradford bloodied his lip.

After the game, he was asked about the hit from Suggs and whether or not he thought the Ravens linebacker was going after his injured knee.

"You would have to ask him but I think that is what he was trying to do," Bradford said. "You know, it is a part of the game and you just have to move on."

Suggs had the following to say on the subject:

Suggs on Bradford hit: "If you want to run the read option with your starting quarterback who's had two knee surgeries, that's on you."

"I was a little upset," Bradford added. "I’m not sure if I can repeat what I said to him but it’s a part of the game. I’m sure that is not the last time something like that is going to happen this year, but hopefully it doesn’t."

But the Eagles quarterback survived the hit -- that alone has to help his confidence in his knee -- and thought it may have helped fuel the Birds' 80-yard drive.

"It got our guys fired up though," Bradford said. "There is no doubt about that and I thought we responded well after and put together a nice drive. When things like that happen in a game you can’t dwell on it, you just have to keep going.”

For being such a short outing for Bradford, it certainly turned out to be an eventful debut. And at last, the Eagles QB cleared one of the final tests in his return from that second ACL surgery -- he said he needed to "take a shot and get back up."

Although Suggs' hit wasn't exactly what he meant by that.

“No, it’s probably not the [hit] I had in mind when I said that, but it was good," he admitted. "I took a few hits tonight and got back up. I feel good. I think it’s part of the game and it’s one of those last hurdles, one of those last boxes that needed to be checked and I think it was tonight.”

As for his play, Bradford was happy with it overall. Happy, but not satisfied. There's still work to be done before the regular season.

“I feel like once we got rolling out there I felt pretty good," he said. "Obviously there are a bunch of things we all have to keep working on. I think there are things I have got to clean up. There are things that everyone has to clean up. I think it’s nice we still have a couple of weeks left of the preseason not only to get to work next week but also the next week of practice.

"So we’re still trying to build on what we did tonight, but I still think there is work I have to do in order to be ready for the season."

And Kelly liked what he saw out Bradford in his first action of the preseason, especially given the circumstances.

"I thought he looked good for the first time back out there," the Eagles coach said after the 40-17 win. "I think we'll get back in the film room with him and find out what his thought process was and where he was. But I think he's happy, just got his chance to get back on the field and play football again."

The team's next game is against the Packers, and although Bradford deferred to Kelly on how much he'll play -- Kelly said he doesn't know yet either -- the Eagles QB wants as many snaps as his coach will give him.

"That’s Coach’s call how much I play next week but I think the more reps, the more work I get, the better," he said. "We’ve put in three good weeks at camp and I feel like I’ve got down a lot of reps in practice. Obviously I got some action tonight and in the previous two days against the Ravens.

"I’m looking for all the work I can get next week.”

After the game, Kelly wouldn't even confirm whether or not Bradford will play against the Packers because, well, Bradford could be dead by then. Or at least on his way out. [I'm just going to leave Chip's quote here in its entirety...]

That would be ... unfortunate.

Unlike Bradford, Murray stayed out on the field for the Eagles second drive of the game -- which again followed an interception of Joe Flacco, this time by Byron Maxwell -- and got his first taste of the end zone.

He had just one carry on the drive (to go along with a 14-yard reception), but it was a two-yard score that put the Eagles up 14-0.

That would be all for the former Cowboy and 2014 NFL rushing champ. He finished with five carries for 17 yards and a score.

But it's a long season ahead, and after nearly 500 touches year, Murray thinks the Eagles stable of proven backs will be beneficial to all.

“Obviously we have a good group of running backs," Murray said when asked what's ahead for the Eagles' backfield in 2015. "[RB Ryan] Matthews and [RB Darren] Sproles, those guys are very phenomenal, great guys who work extremely hard. So it’s going to be hard for teams to really focus on one running back and I think it is going to be good that we are all going to be fresh and going in and out of the game.”