Matt Barkley vs. Tim Tebow: Round 2 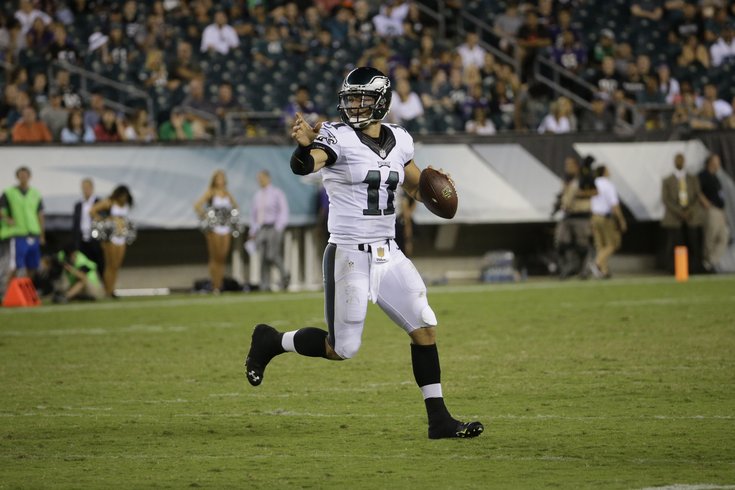 After one game, the battle between Matt Barkley and Tim Tebow for the Eagles third quarterback spot was too close to call. Barkley played quite well, so the early edge went to the former USC passer, but it was Tebow's first game action in almost two years, and he certainly didn't play poorly enough to draw anything close to resembling criticism from coach Chip Kelly.

In the six days since, reports have indicated that Kelly is in favor of keeping Tebow over Barkley, perhaps because of what he can brings to the ground game. Or maybe the Eagles think someone would be willing to trade for Barkley. Either way, the Eagles coach, who assumed final say on all personnel decisions earlier this year, went out of his way to point out that the two quarterbacks were, at times, playing with very different supporting casts.

Because of all those things, I thought there was a chance the two would swap roles this week, with Tebow entering the game first, and Barkley running the anchor. That didn't happen.

What did happen, however, was a much lighter workload -- compared to Game 1 vs. the Colts -- for both quarterbacks. Even though Sam Bradford only played one series, neither Barkley nor Tebow got a ton of chances after having six drives each last weekend.

As you can see, it was an even smaller sample size than we got against the Colts, but we saw a lot of the same things. Barkley is most definitely the better passer  -- that's still not a great accomplishment -- while Tebow has it all over him on the ground -- also not saying much.

And for the second week in a row, he was able to show that off. Last week it was a touchdown run late in the fourth quarter. This week, it was a 26-yard sprint up the middle that first brought the remaining fans at the Linc to their feet.

He followed that up on the Eagles next possession with what looked like a four-yard TD run -- it was overturned on review -- with two minutes remaining. Kevin Monangai stuffed it from one yard out on the next play to give the Eagles a 40-17 lead.

Right now, I still have to stand by my prediction that Tebow makes the roster. And if there's not much difference between the two the rest of the preseason, we already know who the coach favors.

We'll have more after hearing from Kelly and both quarterbacks down in the locker room...