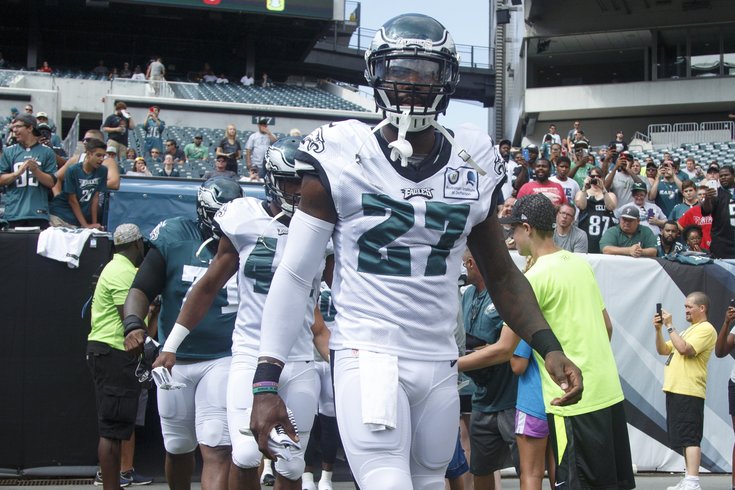 Philadelphia Eagles training camp is 10 practices deep so far, although the first three were rookies and quarterbacks only. With a full week under their belts as a full team, let's take a quick look at five six players who have had good camps.

We'll lump the starting safety tandem of Jenkins and McLeod together, as both guys have been very good, as expected. In his Thursday press conference, Jim Schwartz refused to be complimentary of a number of his players, noting that they need to be more consistent. However, he exempted Jenkins and McLeod from that criticism.

"I have been complementary to the safeties for good reason," said Schwartz. "Those guys are good players. They come to work every day. They're a great example to the secondary on how to be a pro, how to communicate, how to be in the right spots. Those guys -- when I say we haven't been consistent as a defense, I'd probably like to exempt those two guys because they've played very, very consistently. They're great communicators and we need more guys following suit."

We noted Burton when we looked at five off-the-radar players who have performed well, but Burton had made plays every single day of camp, and is finally going to get the playing time in 2016 that he deserves.

My guess would be that Doug Pederson will try to move Burton all over the formation. He'll play some tight end, a little fullback, and they'll even line him up on occasion on the outside when they think they can get him matched up on linebackers.

Wisniewski has had a great camp so far while filling in for injured RG Brandon Brooks, who has not yet practiced because of a hamstring injury. Wisniewski has made the most of his first-team reps, playing with a nasty streak and showing capable athleticism in getting down the field and making blocks on screen plays.

There aren't many people out there who have been as critical of Bradford as me, but Sleeves has had a very solid camp. Carson Wentz is bigger, stronger, younger, more athletic, has a more powerful arm, and there are times when the rookie first round pick will make a "wow" play that Bradford or backup Chase Daniel could only dream of making. However, Bradford has easily been the most accurate quarterback of the three, as well as the most consistent on a day-to-day basis.

Wentz and Daniel have had their moments, but they have also had significantly bad days, while Bradford has not yet had a clear and obvious clunker.

This time last year, Bradford could barely move around in the pocket as he was still recovering from his second ACL tear. This year he looks far more sturdy and is able to do more. Bradford started the 2015 season in hideous fashion. I don't believe we'll see a repeat of that in 2016.