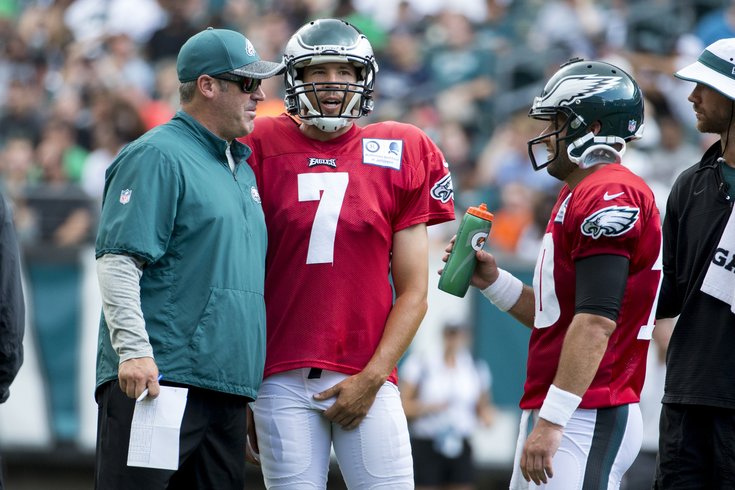 Sam Bradford shows what he has for you if you think another quarterback on this team is taking away his job during training camp.

The Philadelphia Eagles were in pads once again on Day 10 of training camp, but it was a "thud" day, as opposed to full-on tackling. Both Sam Bradford and Carson Wentz were sharp today. Here's what we saw:

• Sam Bradford was outstanding during the Eagles' red zone session today. Here are the throws he made during that session:

That may have been Bradford's best series of camp so far.

• Carson Wentz had a strong day as well. One of the best throws that Wentz makes is the fade throw in the end zone. It's something he did well at North Dakota State, and it's something he has done well so far throughout OTAs, minicamp, and training camp. Here's an example of a clutch Wentz fade throw that actually won a game over Northern Iowa.

In today's practice, Wentz had two throws to the exact same spot on the field like the one above, that were delivered with touch, timing and accuracy.

The Eagles haven't been a top 10 red zone offense since they went to the Super Bowl in 2004. Here is where they have finished over the last 12 years:

One thing the Eagles have not done over the last decade is successfully complete fade patterns. Maybe Wentz can break that trend.

• Today was a not at all a good day for Chase Daniel. While he has generally been good this summer, he was wildly inaccurate for most of the day.

• Nelson Agholor had the play of the day. In 7-on-7's, he was being face-guarded by Randall Evans on a corner route in the back of the end zone. Agholor reached over Evans' head and caught the ball off of his back while keeping both feet in bounds. Very impressive play.

Evans, meanwhile, also had the most obvious pass interference call I've ever seen in camp when he flat out tackled T.J. Graham on a deep ball a good second before the ball got there.

• The Eagles have run a number of jet sweeps to their wide receivers the last few days. That's something the Chiefs did last season. For example, here's Jeremy Maclin on a jet sweep:

If you want an easy way to get the ball in the hands of Josh Huff, who has RAC skills, but not stellar receiving skills, that's one way to do it.

• One player who had a strong spring at OTAs but has not had a very good summer here at training camp is TE Chris Pantale. Many believe he is a lock to make the roster, and he may very well be, but I don't see the appeal. Today, Pantale had two egregious drops, one of which was in the end zone and subsequently picked off by Chris Maragos.

• I've noted this already, but in my view, the best undrafted wide receiver here is Paul Turner. He has made catch after catch after catch working the middle of the field, and has avoided drops. On one play today, Wentz threw down the seam complete to Turner, who had to catch the ball in traffic and endure a horse collar tackle immediately after m aking the play.

Turner is only 5'10, 193, and he ran an unimpressive 4.55 at his pro day. That's a bad size/speed combo. Turner also only had 657 yards in his best season in college. I'm not exactly sure what the Eagles saw in Turner when they signed him, but credit them for finding him.

• Jason Peters got hurt today. He was down momentarily, but got up and walked off on his own power. That's a quad injury, per the Eagles. Malcolm Jenkins also got dinged up today with a hamstring jawn.

• There's just something I don't like about the way Rueben Randle plays. There doesn't seem to be a lot of fight in him. On a short throw by Daniel, the ball was off the mark, but not so bad that Randle couldn't have tried harder to make a play on it. Instead, Jalen Mills came up with the pick because he wanted it more. Credit Mills for making the play, but it was not Randle's best moment.

• Mills is clearly ahead of Eric Rowe at this point, by the way. I'm not sure if aliens abducted Rowe and replaced him with some other version, but he has not looked at all like the promising player we saw in the back half of the season last year.

There. (Not that most of you aren't already there).