Five Eagles who impressed during OTAs and minicamp 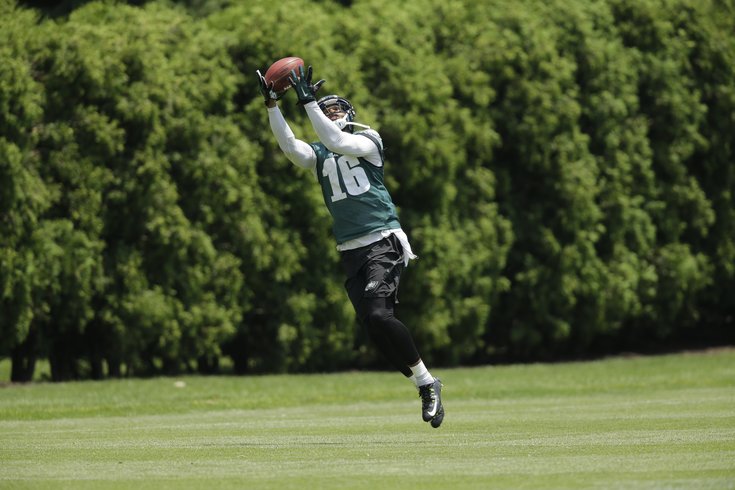 Seyi Ajirotutu (or as I like to call him, 'Toots'), has been an under-the-radar guy who has impressed so far.

Eagles OTAs and minicamp are officially in the books, and we won't see the Birds on the football field again until August. And so, let's take a look back at what Eagles have impressed so far. To note, all practices were in shorts, and therefore were non-contact, so it's basically impossible to fairly evaluate anything other the skill players. The five who impressed me:

Anytime a tight end made any kind of impressive catch, it always seemed to be Ertz. He was very active, and is already becoming one of Sam Bradford's favorite targets. Ertz has said that he wants to be the best tight end to ever play the game. While that is obviously a very lofty goal, I feel fairly ceretain that if the Eagles play him as much as they should this season, he's going to put up bigtime numbers.

He's legit. Players in the Eagles secondary are already saying he's been the most impressive receiver they've faced so far this offseason, and the media seems to be in unanimous agreement that he looks very fast and shifty. As we noted in the final notes of minicamp, there are some players who don't play to their timed speed. Agholor ran a 4.42 at the Combine, and he plays every bit as fast as that would indicate, and then some. I'd be very surprised if he didn't start Week 1.

The Eagles gave Thurmond the opportunity to move to safety, which he has embraced. Thurmond is an intriguing fit for the Eagles on the back end. They love their safeties to be able to drop down into the box and cover slot receivers man-to-man so they can stay in their base defense against three-WR sets. Having been a good slot corner in the NFL already, Thurmond brings that ability to the table. What has been a surprise is how natural Thurmond has looked on the back end. In the final minicamp practice, he darted up from his safety spot and jumped in front of a receiver for an interception. It was a really nice, aggressive play that you might not expect from a corner trying to transition to safety. He seems to understand the position well.

When I first started covering Eagles training camp, I would watch David Akers make field goal attempt after field goal attempt. He'd drill 10 straight from all different distances like it was nothing. I haven't seen that since the Eagles replaced Akers with Alex Henery, but I see a little bit of that in Parkey so far. The one day I was able to watch him, Parkey made 14 consecutive field goals, with no misses, which included attempts of over 50 yards. Last offseason, kicker became an enormous concern when Henery couldn't hit the broad side of a barn during preseason games, and Murderleg (remember him?) was downright brutal in camp. No such worries this year.

There are certainly players who have impressed that I've just gotten used to impressing in practice, like Jordan Matthews and Darren Sproles. Here we'll note an under-the-radar guy in Ajirotutu. Over the last two seasons, only one player in the NFL (Justin Bethel of the Cardinals) has had more special teams tackles than Ajirotutu. While Ajirotutu has looked good in special teams drills, I've been surprised by his effectiveness as a receiver. He has made an impressive number of catches, and has looked athletic doing so. For the most part he's done it against backups, so I'd like to see him get more reps against the first team defense. Still, the Eagles may have themselves yet another special teams stud, and possibly more.