Eagles' Zach Ertz: I want to be the greatest tight end of all-time 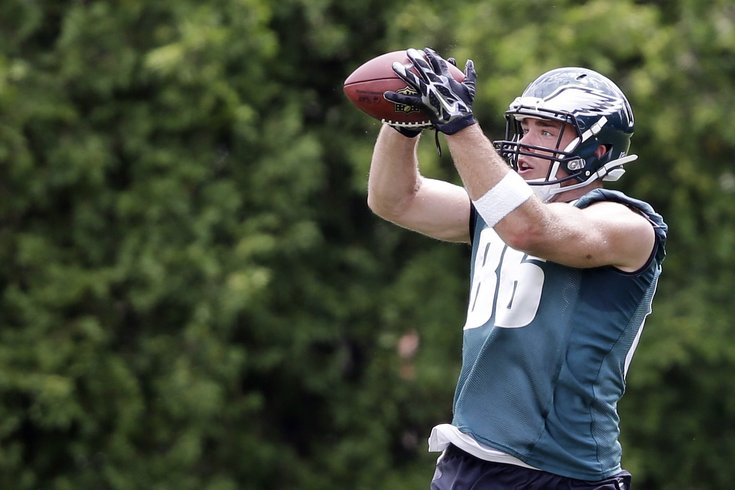 Zach Ertz is smart. He went to Stanford, so that shouldn't be a surprise.

Zach Ertz is really good at football. He plays in the NFL, so again, no surprise here.

Zach Ertz is never satisfied. And it's this, above all else, that could help the Eagles tight end finish his career where he wants, as the greatest at his position to ever play the game.

“I want to be the best," Ertz said after practice Wednesday. "And I’m not going to settle for anything less than that. That’s the goal that I’ve had each and ever day since I was a little kid — to be the best at everything I do — and I don’t think there’s any reason I can’t do that.”

Desire alone is not enough to make someone great at what they do. But when you combine that with raw talent and brainpower, now you're getting somewhere.

For the 24-year-old tight end, his second year was an inconsistent one, and one that left him looking to improve his game in the offseason. But to hear him say it, that may have been a good thing.

“Yeah, definitely [it helped me grow]," Ertz said of the adversity he faced in year one. "There was a lot of maturity involved last year. There were a lot of ups and downs, but that’s the NFL. That’s life. There’s going to be highs and lows in this league, in life, and you just have to never get too high or too low.”

Although he caught 58 passes -- 22 more than he caught his rookie year -- for 701 yards and three touchdowns, it wasn't good enough. He not only wanted to improve production numbers, but his game as a whole.

The main focus* for Ertz this offseason has been his blocking, as he met with several people, including former Cowboys offensive line coach Hudson Houck.

*That doesn't stop Ertz from taking post-practice reps on the JUGS machine with wideouts Jordan Matthews and Josh Huff.

“There’s not a better tight end — as a blocker or a mentor — in the league then Brent [Celek]."

“The blocking side comes first for me," Ertz said. "That’s what I focused on all offseason. I think that’s what I’ve made the most improvement on as well.”

Hopefully, according to his coach, it's that kind of work that will help him take his game to the next level.

"A lot of guys do things and try to get with a coach to prepare them for the Combine but then they forget about that.  Zach [Ertz] is not that type. He was traveling all over the country trying to make himself a better blocker, a better receiver, doing all the little teeny things that's going to make him kind of take that next step, and that's what we're excited to see where he goes with that."

But Ertz isn't focused on having a big year. Not personally, at least. He won't be paying attention to his own statistics -- not that blocking is something you can quantify statistically.

"I’m never going to put numbers on it," he said of his expectations for 2015. "The only number that I truly, truly care about is the wins and 16-0 is the goal for us. Obviously, it’s going to depend on how we play each and every game, but I think that’s the goal we have right now, getting better each and every day."

The way Ertz hopes to contribute to that goal is by being the best he can be.

And if blocking is something he wants to improve on, look no further than teammate Brent Celek, the second longest tenured Eagles player behind long snapper Jon Dorenbos.

“There’s not a better tight end — as a blocker or a mentor — in the league then Brent [Celek]," said Ertz. "He’s done everything that he can to improve my game and that speaks volumes about the type of player and person he is."

But this offseason, Ertz sought a higher power. He wants to be the best, so why not sit down with arguably the best tight end to ever play the game, Tony Gonzalez.

While training in San Diego with teammate Darren Sproles, Ertz sent a text to the future Hall of Famer and soon the two were discussing the finer points of their position over lunch.

“Tony Gonzalez is, obviously, probably the best tight end to ever play the game," Ertz told reporters. "And that’s where I want to be when I’m done in hopefully 15 years from now. He was great to me. Just for him to have the wherewithal to kind of sit down with me and teach me some of the things he knows about the game, I think it was unbelievable for me.”

Yes, it's strange to see a Cal guy giving advice to -- and buying lunch for -- a Stanford guy, but that's all in the past.

“I think once we graduate, I think we’re viewed as tight ends now," Ertz added. "It’s a new fraternity now, and I think it’s a great one.”

So what advice did he get from Gonzalez?

“He was a good blocking tight end early in his career and I learned that I needed to do that to be considered one of the best," Ertz recalled of their meeting, which he said was in late February or early March. "I can’t be viewed as just a receiver. There’s no receiver that’s considered a tight end. The whole knowledge of the game, the mental side of the game, it was great for me. I read a lot of books that he recommended, so there was a lot of great stuff coming from it.”

It will be interesting to see if there's a noticeable improvement on the field from Ertz, especially as a blocker. Even if it's subtle at first, the Eagles tight end will continue to work until he's considered the best, no matter how long it takes.

Of course, he'll never get that validation from his coach. That'll need to come from us.

"That's up to you guys to figure out," Kelly said. "I don't really care where he's rated. I know he's doing a great job for us."

That would be good enough for most players.

Then again, Zach Ertz is not most players.