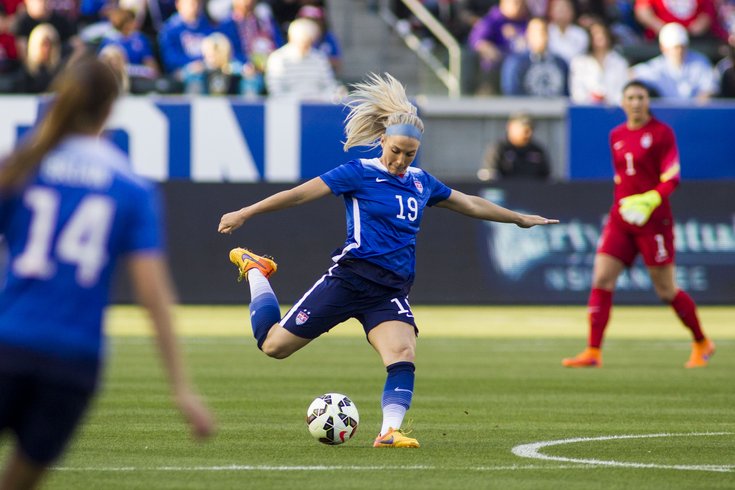 When it comes to supporting the U.S. women's team at World Cup, Eagles tight end Zach Ertz is rooting harder than you are.

And it's not because he's more American. It's because his girlfriend, Julie Johnston, plays defense for women's national team. The two have been dating since college -- Ertz went to Stanford while Johnston attended nearby Santa Clara University -- and the Eagles tight end spoke to reporters about their relationship, his soccer knowledge and his World Cup plans.

What did you think of the US-Nigeria game Tuesday night?

“It was a great game. Julie should’ve scored, but got screwed, per se. Terrible offsides call by the ref. Obviously, I’m a very biased. But they got three points. I think they’re going to play in Edmonton on Monday and I’ll be up there for that.”

Will you be at all the games?

“No, I’ll be up there in Edmonton and then I have to get back to training. So, I’ll go up to that one, and then if they make the finals, I’ll go to that one in Vancouver.”

How does Julie like it? What’s she been telling you?

"She’s liking it a lot. Obviously there’s a huge time zone difference right now; they’re in Vancouver for this last game. But she’s playing great. I’m very proud of her and everything she’s doing.”

Does she come to all your games?

“When they don’t have camp, she’s at all of [my games]. All the home games, I should say. But she’s there whenever she can be, and I love her being there. And I think she loves Philadelphia as well.”

Does it help that both of you are professional athletes?

“I think so. If one of us has a question, it’s kind of helpful to bounce a question off one another. But when we’re in our relationship, we don’t focus on all the outside stuff. We focus on each other. In college, we were nothing to each other. All we knew was the people. We didn’t know the athletes. And now that we’re both at the highest level, it’s kind of blown up a little bit more. But all we know is each other.”

How deep is your soccer knowledge?

“Before we started dating, it was average at best. But now, I think it’s pretty good. We watch a lot of soccer games together, a lot of the European games together. So I know all about the best players in the world. And I’m big into the FIFA video game as well. I think I’m one of the best in the country, if not the world. I’m just kidding.”

Do you know more about soccer than she knows about football?

“I’d like to think so. But she knows a lot. Not all the penalties and stuff, but enough.”

Does she think they should throw the ball to the tight end more?

The U.S. women take on Columbia on Monday night at 8 p.m. in Edmonton in the Round of 16.