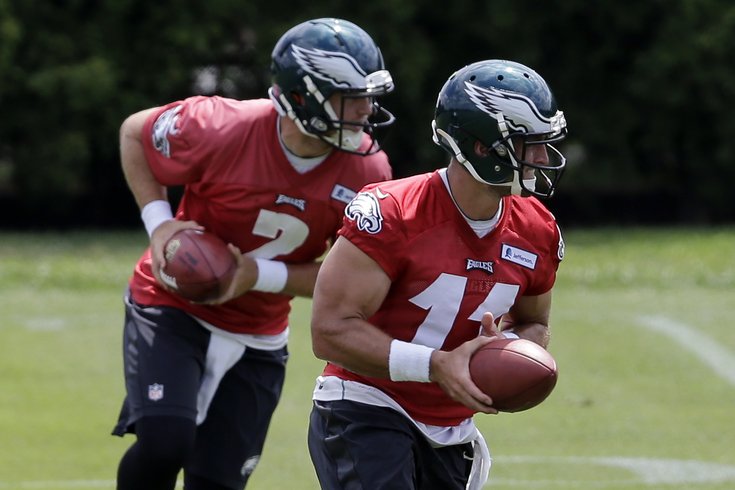 You can mark that down as my first observation, as I am here to unsuccessfully fill Jimmy Kempski's shoes while he attends to more pressing matters. [Note: There are things more important than the Eagles. In fact, most things in life are.]

Here's a look at some other things I noticed down at NovaCare:

• Tim Tebow hit G.J. Kinne for a first down on the final play of practice. Yes, that actually happened. And the rest of the players let out a louder cheer than usual.

Tim Tebow to ... GJ Kinne for a first down. If we hear that during the season, we're all in trouble. That's how Eagles practice will end.

Overall, I haven't seen much out of Tebow. I've said since the Eagles signed him that I wouldn't hate him being on the roster for special goal line packages, but other than that, I'm not sure what purpose he serves. At one point Tuesday, he tucked the ball and ran on back-to-back plays during seven-on-seven drills. You know, the one where there's no defensive line coming at you?

Still, knowing Chip's philosophy of having a legitimate backup that can aptly fill in if needed, I doubt he'll waste a roster spot on the former Heisman winner, let a lone a QB spot. [And I don't think Tebow would be interested in being the practice squad quarterback. He may be, but if I was him, I'd be much more likely to try to get another TV gig.]*  Then again, whenever I've said something like that before, Kelly's gone and proven me wrong.

*Tebow's actually not eligible for the practice squad. Hat tip to Sam Lynch for pointing that out on Twitter.

And prior to practice, Kelly said he liked what he's seen out of Tebow:

"I think he has progressed. In our system, the thing that's difficult, especially on a first-year quarterback -- and you kind of saw it with Mark [Sanchez] a little bit last year -- is we throw our guys in the deep end. And they get everything and then they've got to go."

"They drop back, ready to throw, but they have a rookie receiver that ran the wrong route. They're expecting a guy to be here, when he's at the top of his route, but he's on the other side of the field because he didn't know his route. You have to deal with a little more variables. ... and it takes a little more time to get all the guys on the same page.

"I have seen improvement from Tim since the day we got, in terms of his knowledge of understanding where everybody is. There's a whole process. And for him, what we have done is different than what he's done anywhere else. So in terms of learning our terminology and how we do things, I think each week you've seen an incremental bump and then some. I'm excited to see where that takes him. It will be a good competition as we get into August.''

What else was he going to say?

Tebow is expected to battle Matt Barkley for the third-string QB job once training camp opens in August.

• Josh Huff is still fast. The second-year wideout had an underwhelming rookie season (8 catches, 98 yards; 14 KR, 415 yards, TD), but figures to play a more-integral role this season with the departure of Jeremy Maclin, who led the team in receiving last year.

Josh Huff has had a quiet spring but more active this week. Caught a pass in the middle of the field from Sanchez and accelerated for a TD.

Some of the knocks against him last season had to do with mental mistakes, but that's to be expected from a rookie. The good news is, he's looked really good so far during minicamp. Furthermore, he and Jordan Matthews -- they're both pretty much guaranteed starting spots -- spent time on the JUGS machine every day after practice. On Wednesday, they were joined by tight end Zach Ertz (more on him tomorrow).

Jordan Matthews and Josh Huff putting in work after practice, like they do everyday. #Eagles pic.twitter.com/HKp0rZolOb

• Nelson Agholor is going to be good, but could use some work on the JUGS machine. I couldn't see if he was over there with Huff and Matthews (although I don't think he was), but after a few more dropped passes Wednesday, it wouldn't hurt to see the rookie receiver spend some time working on that. He's got all the speed in the world, but he's gotta catch the ball first.

But it wasn't all bad for Agholor. He did catch a trio of really nice touchdowns -- one from each* of the QBs if I remember correctly -- after a few dropped passes early in 11-on-11.

*Bradford doesn't count because he doesn't partake in 11-on-11 due to his ACL injury. He said Tuesday that he'll be ready for that when training camp starts.

Barkley connects with Agholor on double move in back of the end zone. #Eagles

Tebow finally hits a wide receiver in the end zone after multiples attempts. Agholor found a way to get open.

Sanchez great throw and terrific fingertip grab by Agholor in back of end zone on crossing pattern in red zone work. #Eagles

An up-and-down day for the rookie, but you have to like the upside he's shown so far this summer.

• Non-contact doesn't always mean there's no contact. 24-year-old wideout Quron Pratt was nearly decapitated during 11-on-11 drills when Matt Barkley led him a little too far in the back of the end zone. Pratt, a Rutgers grad from Palmyra, N.J., slammed into the padding on the goalpost, was spun around, and landed on the ground. It caused a collective gasp from the pool of reporters looking on, but that was it. He hopped back up and didn't seem to miss a play.

That's all for now. We'll be back Thursday as minicamp wraps up for the summer.