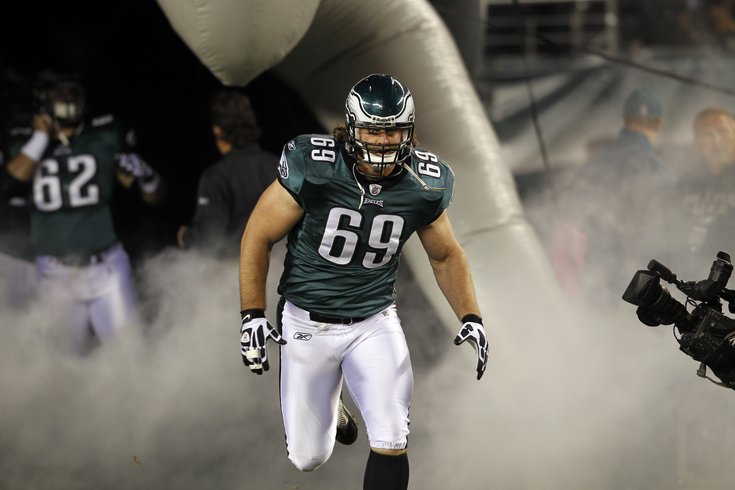 Evan Mathis will run out onto the field from under some other non-Eagles inflatable thing 2015.

Evan Mathis was not the problem. His contract -- or rather his desire to restructure it -- was. At least that's what Eagles head coach Chip Kelly told reporters prior to Wednesday's minicamp practice.

"No, not at all," Kelly said when asked if Mathis didn't fit the team culture we've all heard so much about. "There was a money issue and we just didn't come to terms on the money. ... It was a money decision and we just weren't on the same page with the money."

Kelly also added that he and GM Ed Marynowitz have been in constant contact with Mathis' agent, Drew Rosenhaus, over the past four months, presumably in an attempt to get a deal done.

The reason some speculated that it was a culture issue was not because of anything Mathis has done personally -- on or off the field -- but because of the distraction that comes when a player, even an offensive lineman, decides to hold out. If there's one thing Chip has done consistently*, it's eliminate distractions.

*Okay, except for maybe Riley Cooper. And he brought in Tebow. But for the most part...

However, this would have been more than just a distraction. It would have been an attack on the Chip Kelly way: everyone buying into one goal and moving toward that goal as a unit. And while Mathis said he planned on attending minicamp this week, Kelly said he had no indication that was the case.

Even in dismissing the notion that he has a specific "team culture," Kelly laid out the things that make him tick:

"I really don't think about what that is," Kelly said in response to a question about the team culture. "It's a bunch of guys that are working very hard, and that's what we're looking for."

And if that's really all it is -- I think there's slightly more to it than that -- then Mathis should still be here. But as Kelly has maintained since his release, it was all about the money.

Mathis, who had long been unhappy with his contract, skipped the optional OTAs earlier this offseason. On Tuesday, Kelly addressed the media for the first time since releasing Pro Bowl guard Evan Mathis last week and here's what he had to say when asked about the decision to let Mathis go [via Jimmy Kempski]:

Kelly claimed that he released Mathis now so that he could find a new team as soon as possible.

"Hopefully, I was seeing if he could catch on with somebody before the minicamp so he could make a team. I'm not going to hold guys out. I mean that's just not the deal. If he didn't want to be here and he wants his release, we granted him his release. We moved on, they moved on. I hope things really work out for Evan."

Following those comments, Mathis told CSN Philly's Geoff Mosher that the 33-year-old lineman planned all along to attend this week's mandatory minicamp, and that although he wanted a new contract, he was willing to honor his current one and play out the season.

“Yes, I would have played under the contract and been fine — like last year,” said Mathis, who has asked for a restructured contract since the 2014 offseason. “I can block stuff out and not let it be a distraction. I missed voluntary stuff, but I was still working hard. It doesn’t mean I was going to be a bad apple. I would never do that.”  [csnphilly.com]

Mathis went on to say he was hoping to restructure his deal to add more performance-based incentives after turning down a proposed deal last year from then-GM Howie Roseman.