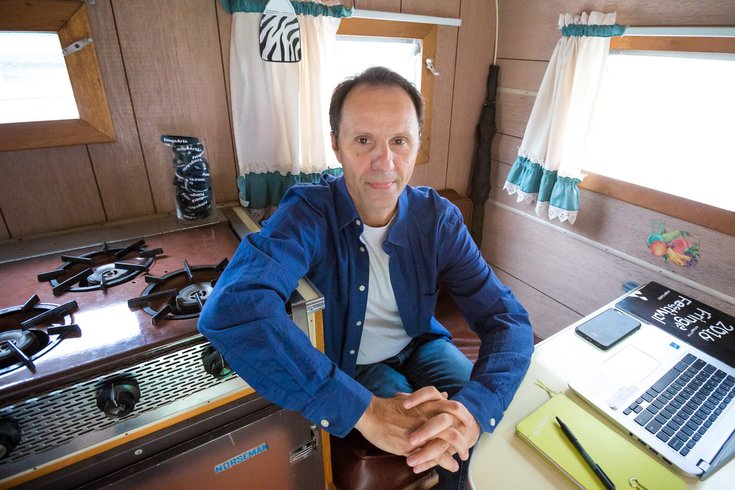 Nick Stuccio, president and producing director of FringeArts, poses inside his newly purchased 1962 Nomad camper that will be used as the box office at FringeArts headquarters, located at 140 N. Columbus Blvd.

Now in its 19th year, Philadelphia's Fringe Festival continues to be a highlight of the city's arts scene every September, when it unleashes some of the city's most respected artists alongside its most unknown. In 17 days, and featuring more than 1,000 performances, it will put forward the most cutting-edge offerings in Philly dance, music and performance art – shows that, largely, aren't afraid to embrace the id and raise a few eyebrows.

Here, Nick Stuccio, co-founder of the festival (back when it was just a few dozen artists in Old City) and president of FringeArts, reflects on founding the festival, the most memorable performance he's seen over the years and what he looks forward to seeing during the 2016 Fringe Festival.

What do you think is the biggest change between how Fringe operated when it was founded in the ‘90s, and how it operates now?

Everything has changed. We grow based on our own capacity. With every encounter, every show we present, we learn something and our capacity expands. Really, we've been working toward this moment. There's a whole generation of people in this city that doesn't remember Philadelphia without a Fringe Festival. For them, it's part of the fabric of the city.

I used to dream of presenting the artists we present, and now those dreams are real. I remember the first time I went to Edinburgh and I saw large-scale international contemporary work for the first time – Boris Chartmatz, Pina Bausch, Netherlands Dance Theatre – and it changed everything.  We've been able to realize those dreams because of the institution we've built. In order to present the artists we do, we had to get better, and we had to grow up.

What do you think makes Philly’s Fringe Fest stand out from the rest?

We're unique because of the relationship between the Independent Fringe Festival and the curated works. That's what makes us different. There's a healthy tension between them, and both are integral to making the festival what it is. We work with the broadest diversity of artists out of any festival, anywhere, because of these two segments of the Festival.

I've been reading through these posts on the FringeArts blog, stories from artists who've been involved with the Fringe Festival for years, and I've been really touched by them. It's helped me realize that there's this vast, immense amount of people who've been indelibly imprinted by their experiences in the Fringe Festival. There are stories from people like Adrienne Mackey, who was still in college when she made her first festival show, and it was a mess, but she's never forgotten it. And she's grown, festival to festival, developed her voice, and that's pretty amazing.

There's a whole generation of people in this city that doesn't remember Philadelphia without a Fringe Festival. For them, it's part of the fabric of the city.

I think of the festival as this mailbag. It's special because one night you could see a show by someone who has never made a play before in their lives, who's trying it for the first time, fueled by nothing but their own passion. And the next you can see one of the premier contemporary artists in the world, who has been developing their craft for decades. You don't get that anywhere else.

Circus arts are really making some waves lately in Philly’s arts scene. Why do you think that is?

They are! Circadium just announced a three-year degree program for the circus arts in Philadelphia.

Circus arts are making their way into the mainstream. For a long time, they were in this niche, driven by Cirque du Soleil. What I've noticed is that circus artists are embracing elements of other contemporary art making – adding narrative, complexity and becoming more interesting because of it.

What’s the most memorable show you’ve ever seen at Fringe? (And I do mean 'memorable,' because I know there’s a distinction between shows you love and shows you just can’t forget.)

As a curator, I'm always looking at the audience during the shows we present. The show that marked a turning point for the festival, and FringeArts as an organization, was 'The Show Must Go On,' by Jérôme Bel. At first, audiences were furious.  They stormed out, yelling, slamming doors and seats. I remember one guy yelling, 'I read about this in the newspaper! This is bullshit!'

But then audiences started to come around, started to understand what it was we were trying to do. And by the end they got it, and it turned into a party. They loved it. And the appetite only grew from there.

It was the exact right moment.  We couldn't have presented that show two years earlier. People would have just said no. We were right there on the edge, and we've stayed on the edge ever since.

What do you look forward to seeing this year?

I'm most looking forward to 'Gala.' I've seen it before but, this time, it will be with an all-Philadelphia cast. I saw it in Paris, and it was powerful then, but now I get to see the effect of it on my own community. It's an incredibly powerful work, one that is equally artistic practice and social practice. It utilizes a cast of 20, 14 of which have never been on stage before in their lives.

I love Jérôme Bel; I love his mind. Now, even with us, audiences know what to expect. They know they'll walk into a theater and a professional will do their best to impress them with their virtuosity. With that structure, there's only so much you can destabilize the audience. But Jérôme Bel flips the audience's experience on its head. That's what he does.

The 2016 Philadelphia Fringe Festival runs from Sept. 9 to Sept. 24 at locations all around the city.