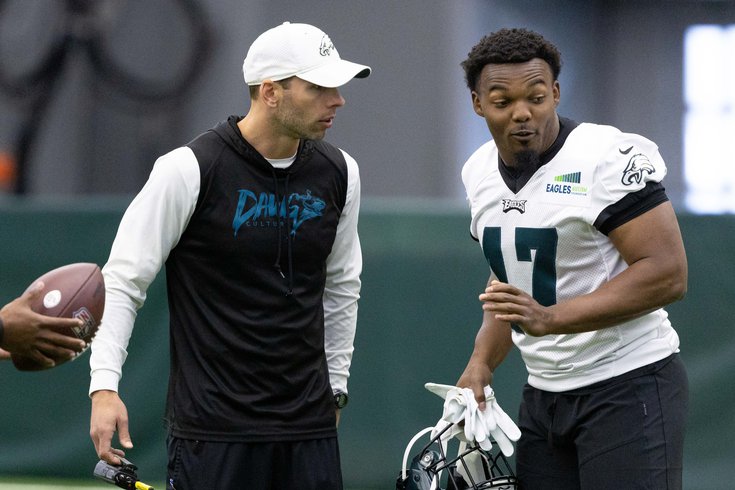 Philadelphia Eagles training camp is only three competitive practices deep (plus a walkthrough), and Monday's practice could be just the first padded practice of the offseason.

There is still a long way to go, but here are five players who have been quiet so far. To be clear, that's not necessarily a bad thing, as they're not standing out in an obviously bad way. I would say that these are the players who could use some positive moments heading into this new week of camp.

• LB Nakobe Dean: T.J. Edwards, Kyzir White, and Davion Taylor have all had their share of standout moments through the first three practices, but Dean hasn't yet made any obvious big plays. Dean is challenged by his lack of ideal size, and he isn't an elite athlete by NFL standards. He'll have to rely on his instincts and intelligence at this level. At some point, he'll be one of the smartest players on the field, but at the moment he doesn't have that advantage because he's trying to learn two positions simultaneously in a new defensive scheme. Still, he could use a splash play to kickstart his rookie camp.

• S Jaquiski Tartt: Tartt only signed with the team six weeks ago, so he didn't even have the benefit of going through OTAs. Defensive backs coach Dennard Wilson noted on Friday that Tartt is dealing with some information overload early in camp. In the meantime, safeties Marucs Epps and Andre Chachere have made some big plays.

• CB Zech McPhearson: McPhearson had a strong camp in his rookie season, but he's been on the losing end of some deep plays down the field so far in camp this year. He also has a lot of young corners behind him on the depth chart who are battling for roster spots and roles within the defense.

• WR Zach Pascal: Pascal had food poisoning, which kept him out of the first three practices of camp. On Sunday, he tweeted that he was in the hospital.

Pascal is bummed that he hasn't been able to practice, and certainly his time away is no fault of his own. Still, he is missing opportunities to build rapport with Jalen Hurts. The Eagles have a limited number of practices — and practice time on the days they do practice — so this time away is not ideal for a new player trying to carve out a role in the offense.

• DT Milton Williams: The Eagles haven't even put the pads on yet, so it's maybe a little tough putting Williams in this group, but he didn't flash the first couple of practices, and he missed the third practice with an elbow injury. It would be nice to see Williams show off his impressive athleticism when the pads go on this week.