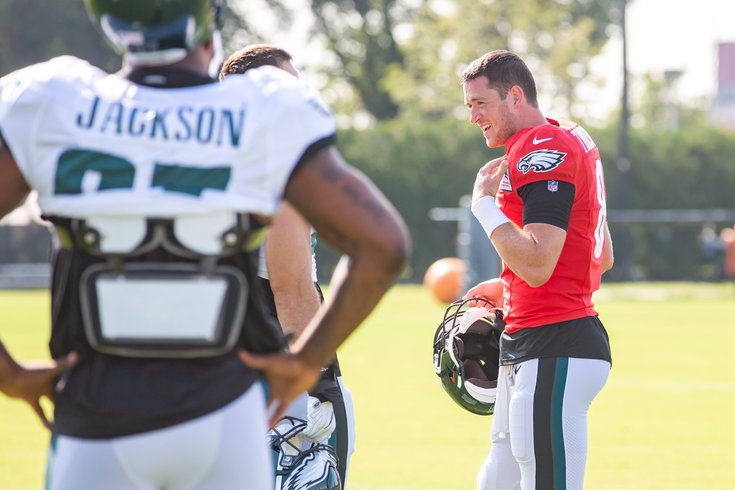 On Thursday night, the Philadelphia Eagles will visit the Jacksonville Jaguars for their second game of the 2019 preseason.

This is typically the game where the starters play the first quarter, but with the trend in the NFL moving further and further away from playing most of your starters, well, at all in the preseason, there are going to be quite a few guys missing from action in this one.

But don't worry, there are still plenty of things worth watching in this one. Here are a few of them in the form of our five over/unders for the Eagles-Jags game...

That's the current total being offered over at Bovada, and like last week, I think it's a little low. At least I would if Nate Sudfeld was still healthy. But, with Carson Wentz not expected to play and Sudfeld recovering from the broken wrist he suffered in the Eagles' loss to the Titans, the Birds are now down to their third- and fourth-string quarterbacks in Cody Kessler and rookie Clayton Thorson.

Those two did very little to inspire any confidence last week, going a combined 5-of-15 for 19 yards and an interception in a combined full half of football. And while they'll have a chance to change our minds in Jacksonville — and there's seemingly nowhere to go but up — it's hard to see both players making total 180s and suddenly lighting the world on fire. More to the point of this category, however, is the fact that those two were held scoreless in the second half against the Titans.

Oh, and as for the Jaguars, they were shut out entirely in their preseason opener against the Ravens and finished with just 112 total yards for the entire game.

In other words, there's a chance this game ends in a 0-0 tie.

In his NFL debut, Sanders carried the ball just three times for three yards. And while that doesn't seem like the best thing in the world for the rookie out of Penn State, it may actually be a positive sign. Not the three total yards, but the three carries, as Jimmy Kempski pointed out in his post on Thursday morning:

In the first preseason game, Sanders only got 3 carries for 3 yards, and in my car the next day, radio callers were bummed by his disappointing night. That's the wrong way to look at it.

The less Sanders plays, the more the team thinks of him. If he has another 3 carry, 3 yard night, or if he doesn't play at all, consider that a good sign.

Conventional wisdom would suggest that Sanders plays a little more in the second preseason game than he did in the first, so it wouldn't be out of the question to see him double his carries in this one. There were also some concerns about his pass-catching ability coming out of Penn State, so you might see his first reception in this one as well. And with Kessler likely to be the quarterback for the entire time Sanders sees the field tonight, there's a good chance we see a few check downs to the running back.

I agree with Jimmy that the less he plays the more confidence it seems the Eagles have in their second-round pick, but I also think they want to see him in some more live NFL action before the start of the preseason.

Speaking of the Eagles running backs, the team struggled to get anything going on the ground in Week 1 of the preseason, finishing with just 37 yards on 17 carries. That's likely to improve tonight, partly because it has to, right? But also because they're facing a Jaguars team that allowed 125 rushing yards in their preseason opener.

Sure, the Jags have a formidable defense, but that's when they have their full compliment of players, something that almost certainly won't be the case on Thursday night.

Furthermore, the Eagles are deep at running back. Behind Sanders and Jordan Howard, there's Darren Sproles and Corey Clement (but it likely neither will play again tonight), as well as Wendell Smallwood and Josh Adams. Even without Clement and Sproles, the Eagles will still be handing off the ball most tonight to Smallwood and Adams, the two guys who led the team in rushing yards last season. Sure, they're not Le'Veon Bell or Saquon Barkley, but they're better (and have more experience) than most of the running backs you'll see in the second half of preseason game No. 2.

Last week against the Titans, Kessler posted a 56.3 passer rating, but with just six attempts, that's an extremely small sample size. This week, he should get to throw the ball quite a bit more, as last week's starter, Sudfeld, attempted 18 passes in the first half. Moreover, Kessler is going to be surrounded by some better players, as last week he was playing with a bunch of guys who likely won't be on this roster in a few weeks.

That being said, the Jaguars did hold the Ravens to a combined 63.8 passer rating, with most of the damage coming against Trace McSorely, who managed just a 33.3 rating on a team-high 22 attempts. I don't see anything that bad for Kessler this week, but I don't think he gets over the hump and ultimately finishes somewhere in the 70s when all is said and done.

Clayton Thorson throws that are physically uncomfortable to watch: 2.5 5.5

He eclipsed this number last week on just nine attempts. And he's likely to play a whole half tonight.

UPDATE: After hearing from several other writers on Twitter, it appears I've set this far too low. More than one suggested I set it at 8.5, and while I don't think that's out of the question, I've decided to split the difference and up it to 5.5. And I'm still going to take the over — in fact, I might still have taken it at 8.5, so I really don't know what I was thinking with my original number...

[NOTE: I do, however, also think Thorson has at least one throw tonight that makes people go, "OK, maybe there's something here."]

BONUS: Number of times the broadcasters remind us Nick Foles won a Super Bowl with the Eagles: 5.5