Flood watch in effect for Philadelphia area this week

Enjoy the sunny skies now because they won't last long.

The National Weather Service for the Philadelphia/Mount Holly area has announced a flood watch is in effect from early Thursday until Friday afternoon, with close to 2 inches of rain possible.

Wednesday will remain sunny with a high near 68. A quarter of an inch of rain is possible at night with a low expected around 49 degrees.

Thursday will be a total washout, with heavy rainfall expected to bring 1 to 2 inches of rain to the area. The high will be near 62 degrees before dipping down to 46 later in the evening.

Showers and thunderstorms are expected before 9 p.m., with just a chance of showers later that night, when a quarter of an inch of rain is possible. 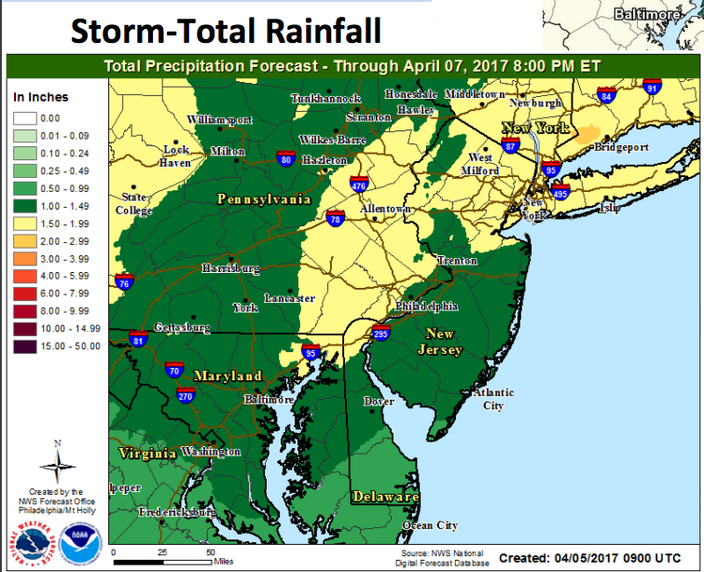 The NWS warns of a potential for flooding in creeks, streams and urban areas, with a slight chance of severe thunderstorms at the Jersey Shore. High winds are also expected.

Friday will clear up but will be a little chillier than Monday and Tuesday's warmer temperatures, with a high near 53 and a low around 39 degrees. The chance of rain is 40 percent.

Saturday will warm up slightly with a high near 58 before Sunday's high of 64 degrees really heats things up.

Break out the shorts and T-shirts next week, when Monday's high will reach near 72 degrees and Tuesday's expected to be even warmer at 78 degrees.

Check out the full forecast from the NWS here.