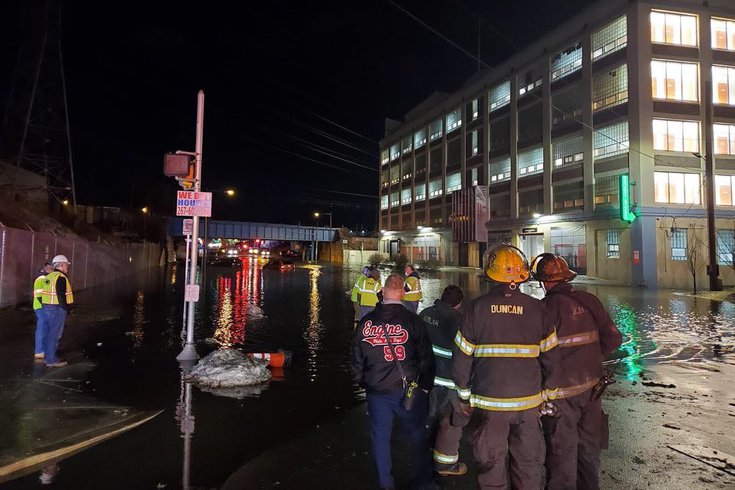 A water main break flooded some streets of North Philadelphia on Tuesday night, causing 11 people to need to be removed from the area by boat.

Streets in part of North Philly flooded Tuesday night when a water main broke and boat was needed to evacuate 11 people.

The flooding started around 6 p.m, when a large, 48-inch water main broke near 29th Street and Hunting Park Avenue in the Nicetown neighborhood.

At least 10 people inside a nearby U-Haul storage facility were trapped by the water surrounding the building and had to be rescued by boats brought by emergency crews. One person located in a car also reportedly was rescued by boat.

No one was injured, 6ABC reported.

It is unclear what caused the water main to break said Adam K. Thiel, Philadelphia's fire commissioner and director of the Office of Emergency Management. The flood did not impact water service in that area of the city, the Philadelphia Water Department told CBS3, though some customers may have experienced a temporary reduction in water pressure, the agency said in a social media post.

“Water started coming into my car. So I had to stand on top of my car because it was like I was going to drown in my car.” People who had to be rescued by firefighters tell us their stories. A massive water main break in North Philly had people stranded. @NBCPhiladelphia at 11pm pic.twitter.com/JZw495b40K

Occupants inside submerged vehicles at 29th and Hunting Park have been rescued. Several employees and customers inside the U-haul facility have also been evacuated via boat @6abc https://t.co/NWxWeRXpu1 pic.twitter.com/LbmBV5Fga3

A separate water main break in Southwest Philadelphia occurred earlier this month, causing a sinkhole to form in the Logan section of North Philly. An SUV that was parked nearby was temporarily swallowed up by the hole. No one were inside the car at the time, NBC10 said.