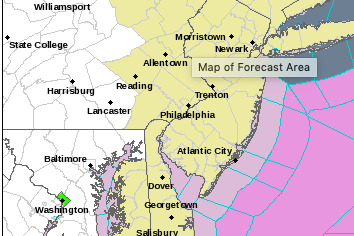 The National Weather Service forecasts another snowstorm will enter the Philadelphia region on Thursday, Feb. 18, 2021.

The heaviest snowfall is expected to hit Thursday morning through the afternoon. It will turn into sleet and freezing rain later in the evening and early Friday morning.

Snow and sleet accumulations could reach 4 to 6 inches and ice accumulations of up to one tenth of an inch are possible, which could make travel very difficult, the NWS said.

After sunny skies and milder temperatures returned to the Philadelphia region Tuesday, weather forecasters say a "significant winter storm" could bring 3 to 5 inches of snow Thursday.

Wednesday is expected to be partly sunny before a storm brings snow, sleet, freezing rain and rain to the region Thursday.

We have one more storm coming in this parade of winter storms - the next chance for wintry weather comes Thursday into Friday. Precipitation should start as snow across most, if not all of the area. (thread) #DEWX #MDWX #NJWX #PAWX pic.twitter.com/LgZnDKXUvg

Snowfall is not predicted to extend beyond Thursday night. The region could see up to 5 inches, but the exact accumulation numbers will be easier to forecast closer to Thursday.

Definitely looks wintry, but will have to see how much of the precip falls as sleet vs snow.

Snow is making headlines across the country this week. A historic storm swept through Texas Sunday, leaving millions without power — and another is on the way.

Philadelphia endured an ice storm over the weekend and rain overnight Monday, prompting the National Weather Service to issue a winter weather advisory for freezing rain and icy conditions.

The upcoming snowstorm will be the fourth to make its way through the region this winter — a noticeable break in weather trends from the past few years. February's first snowstorm marked the first time in 18 years that the city had more than an inch of snow on three consecutive days, the Inquirer reported.

Here's a look at the National Weather Service forecast for the rest of the week:

TUESDAY: Partly sunny with a high near 49 degrees during the day and a low of 23 degrees at night.

WEDNESDAY: Mostly sunny with a high near 33 degrees and wind gusts as high as 20 mph during the day. The temperature will drop to about 25 degrees at night.

THURSDAY: Snow is expected to begin around 8 a.m. The chance of precipitation is 100% with a total accumulation of 3 to 5 inches. The snow will turn to rain and sleet before 11 p.m. and then transition to rain or freezing rain after 2 a.m. The temperature will not vary much, with a high of 33 degrees during the day and a low of 31 degrees at night.

SATURDAY: Mostly sunny with a high near 33 degrees that cools to 19 degrees overnight.