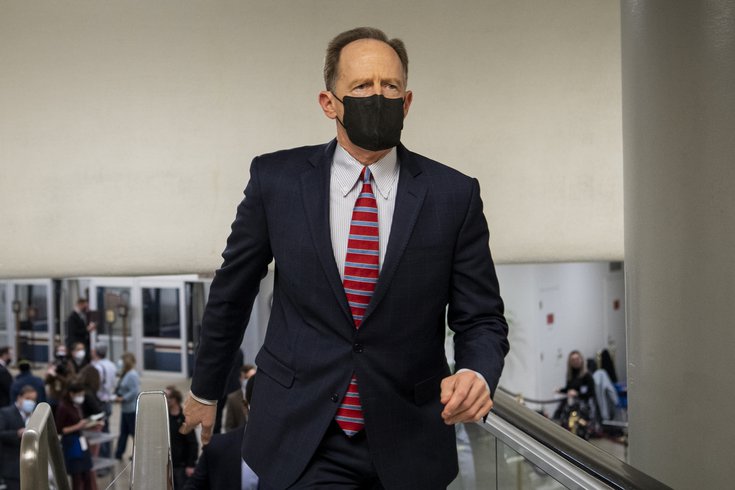 The Pennsylvania Republican Party may censure the two-term senator for his decision, according to the Associated Press. Several county parties already have — or plan to — formally disapprove of Toomey's vote.

Over the weekend, Lawrence Tabas, the chairman of the Pennsylvania GOP, informed county chairs that a meeting was being planned to discuss the impeachment trial and Toomey's decision to join six other Republican senators in breaking with Trump.

After the Senate acquitted Trump on Saturday, Tabas said he was disappointed in Toomey's vote.

The Republican Party in York and Washington counties already have voted to censure. Republicans in Cambria and Chester counties also will consider voting to censure Toomey on Tuesday.

"Senator Toomey has violated the trust of his voters ... and neglected his duty to represent the party and the will of the people who elected him to represent them," a draft of Chester County's resolution reads, according to the Inquirer.

When asked for comment, Toomey's office referred PhillyVoice to remarks the senator made Saturday about possible backlash in his home state.

"Look, Pennsylvanians are divided on this, I’m sure," Toomey said. "I recognize that a majority of Republicans will probably disagree with this decision. I do think it's important as a party to be able to distinguish and in fact to distinguish between some terrific successes of this administration.

"The fact that the president did stand up to and against some bad policies and some bad trends — those things can be true and it can also be true that his behavior after the election became completely unacceptable. I hope that we get to the point where we can come together as a party and recognize those things."

Earlier this month, the Pennsylvania GOP's leadership committee discussed a resolution to censure Toomey, according to the AP. But they opted against bringing it to the full state committee after Toomey said he would consider voting against the constitutionality of the impeachment trial and to acquit Trump.

But Toomey twice joined Democrats in voting for impeachment proceedings to move forward despite a majority of Republican senators pushing back on the constitutionality of holding an impeachment trial against someone who was no longer in office.

The Senate voted 57-43 to convict Trump on charges that he incited the deadly insurrection at the U.S. Capitol last month. All 50 Democrats voted in favor of conviction, but 10 more Republican senators needed to break with their party to meet the two-thirds majority necessary for conviction.

Toomey, 59, is leaving the Senate when his term expires in 2022. Though he voted for Trump in 2016 and 2020, Toomey called on Trump to resign after the Capitol riot. He also had pushed back on Trump-led attempts to invalidate Pennsylvania's 20 Electoral College votes.

Toomey's possible censure is part of a national trend of local Republican parties punishing lawmakers who have publicly defied the former president.