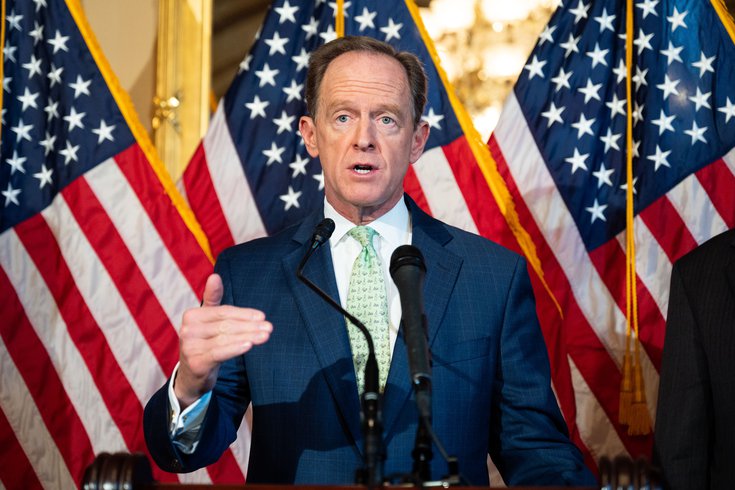 Pennsylvania Sen. Pat Toomey continued on Sunday with his condemnation of President Donald Trump's recent actions, as the two-term GOP senator urged the sitting president to step down for his role in encouraging the deadly attack at the U.S. Capitol this past Wednesday.

"I think at this point, with just a few days left, it's the best path forward, the best way to get this person in the rearview mirror for us," Toomey said to Philly native and anchor Jake Tapper on CNN's "State of the Union." "That could happen immediately. I'm not optimistic it will, but I do think that would be the best way forward."

Republican Sen. Pat Toomey says he thinks President Trump should resign: "I think at this point with just a few days left it's the best path forward" #CNNSOTU https://t.co/3LzY9t4nuO pic.twitter.com/XIjPVqUdK9

Toomey reiterated the same message in a subsequent interview with anchor Chuck Todd on NBC's "Meet the Press."

"Well I think the best way for our country, Chuck, is for the president to resign and go away as soon as possible," Toomey said. "I acknowledge that it might not be likely, but I think that would be best."

"It does not look as though the will or the consensus to exercise the 25th Amendment is an option, and I don't think there's time to do an impeachment," he continued. "There's 10 days before the president leaves anyway. I think the best thing would be a resignation."

WATCH: Sen. Pat Toomey (R-Pa.) tells Meet the Press, “the best thing would be a resignation” from President Trump. #MTP@SenToomey: “The best way for our country is for the president to resign and go away as soon as possible” pic.twitter.com/uBjXHaRC3s

Toomey is now the second GOP senator to call for Trump's resignation in the wake of this past Wednesday's riot at the U.S. Capitol.

Alaska Sen. Lisa Murkowski became the first Republican senator to call on Trump to quit, saying to the Anchorage Daily News that the sitting president "has caused enough damage."

Trump's presidential term is scheduled to end on Jan. 20, the date on which President-elect Joe Biden and Vice President-elect Kamala Harris will be inaugurated and sworn into office.

Toomey's call for Trump's resignation comes just a day after the GOP senator said that the sitting president had "committed impeachable offenses" by inciting violence among his supporters.

"I don't know what [The U.S. House of Representatives] are going to send over, and one of the things I'm concerned about frankly is that the House would completely politicize something. I do think the president committed impeachable offenses, but I don't know what it is going to land on the Senate floor, if anything," Toomey said in an interview with Fox News on Saturday.

However, Toomey did not indicate whether he would vote to impeach Trump. He also questioned whether impeachment was the best course of action in the remaining days of the Trump presidency.

"I don't know whether logistically it's actually really even possible or practical, and I'm not sure it's desirable to attempt to force him out, what a day or two or three prior to the day on which he's going to be finished anyway," Toomey said. "So I'm not clear if that's the best path forward."

Sen. Pat Toomey (R-PA): “I do think the president committed impeachable offenses. But I don't know what is gonna land on the Senate floor, if anything.” pic.twitter.com/5zcnGhccDG

House Democrats are planning to formally introduce articles of impeachment against Trump this week if he does not resign following his role in the deadly siege by pro-Trump rioters on the U.S. Capitol.

If the articles of impeachment pass the House, it would then be up to the Senate to convict or acquit Trump of his alleged crimes.

Another possible option being discussed is the invocation of the 25th Amendment, which would require Vice President Mike Pence and a majority of the cabinet to vote in favor of removing Trump from office. Pence would then become the president for the administration's final days.

Toomey, who is set to retire from the Senate when his term expires after 2022, both endorsed and supported Trump in the 2020 presidential election.

However, Toomey has since distanced himself from the president as the latter has continued to make unproven claims of voter fraud.

As recently as last week, Toomey called these baseless accusations of election fraud attempts "to disenfranchise millions of voters in my state and others."