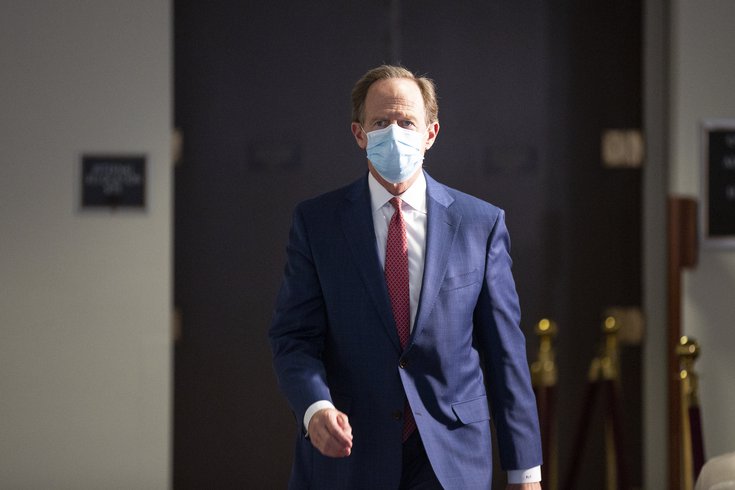 Pennsylvania Sen. Pat Toomey said on Saturday that he will not support a Republican-led initiative in the U.S. Senate this Wednesday to block the certification of President-elect Joe Biden's Electoral College victory, criticizing the movement as an "effort to disenfranchise millions of voters in my state and others."

"A fundamental, defining feature of a democratic republic is the right of the people to elect their own leaders," Toomey said in a statement. "The effort by Sens. Hawley, Cruz, and others to overturn the results of the 2020 presidential election in swing states like Pennsylvania directly undermines this right."

"They fail to acknowledge that these allegations have been adjudicated in courtrooms across America and were found to be unsupported by evidence," Toomey said. "President Trump’s own Attorney General, Bill Barr, stated ‘we have not seen fraud on a scale that could have affected a different outcome in the election.'"

Toomey, who endorsed and voted for the GOP incumbent Trump in the 2020 presidential election, said that "the evidence is overwhelming that Joe Biden won this election."

"His narrow victory in Pennsylvania is easily explained by the decline in suburban support for President Trump and the president’s slightly smaller victory margins in most rural counties," Toomey said.

Toomey's statement on Saturday came after 12 GOP senators said that they would seek to challenge Biden's win and overturn the election results this week, with the hopes of preventing Biden from taking office later this month.

Among the dozen Senate Republicans who are aligning with Trump's baseless, unsubstantiated claims that election fraud took place this past November are Texas Sen. Ted Cruz and Missouri Sen. Josh Hawley. There has been no proof of widespread illegal voting have taken place during the election.

Hawley shot back at Toomey's criticism on Saturday night, challenging the Pennsylvania senator to a debate on the Senate floor over alleged voter fraud in the election.

Sen. Josh Hawley fires back after Sen. Pat Toomey and others raise concerns about his plans — along with at least 11 other GOP senators — to object to the electoral vote count when a joint session of Congress meets Jan. 6, per email sent to Senate GOP Conference tonight pic.twitter.com/8wRZaEKg18

Biden defeated Trump 306-232 in the Electoral College, which included Pennsylvania's 20 electoral votes. Congress is responsible for certifying the result before Biden is inaugurated and officially enters the White House on Jan. 20.

But almost a quarter of GOP senators have said that they will not sign off on Biden's win unless there is an audit of the election. Additionally, as many as 140 House Republicans have indicated that they may object to accepting the president-elect's victory too.

The initiative has earned the support of both Trump and Vice President Mike Pence. However, efforts objecting to Biden's victory are likely to fail, as the Democratic majority in the House and GOP majority in the Senate will certify the election results this week.

...And after they see the facts, plenty more to come...Our Country will love them for it! #StopTheSteal https://t.co/0IdbiACLIb


“The Vice President welcomes the efforts of members of the House and Senate to use the authority they have under the law to raise objections and bring forward evidence before the Congress and the American people on January 6th.” 2/2

Senate GOP leadership has not thrown its support behind the efforts by several senators to reject the presidential election results. Utah Sen. Mitt Romney, Alaska Sen. Lisa Murkowski and Nebraska Sen. Ben Sasse have joined Toomey in voicing their opposition to their colleagues' attempts to block Biden's win.

The egregious ploy to reject electors may enhance the political ambition of some, but dangerously threatens our Democratic Republic. https://t.co/jKEvoXskbl


My statement regarding the upcoming meeting of Congress to formally count the votes of the Electoral College and certify the 2020 presidential election: pic.twitter.com/Bk8jd21Emr