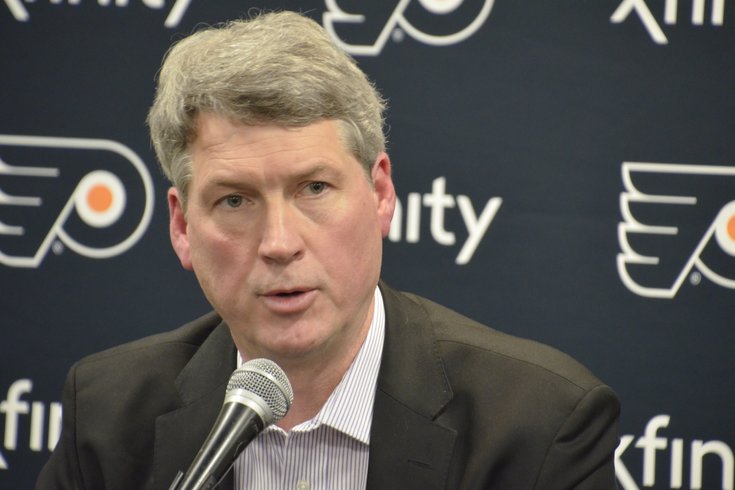 The Flyers are finally among the top contenders in the NHL, which has a two-fold effect on their first-round pick in Tuesday night's NHL Draft. For one, they are picking toward the bottom — 23rd overall — which naturally comes with making a playoff run the season before. They are also, theoretically, looking for a player who can contribute sooner than later, to help them take advantage of their wide open competitive window.

Before we dive into some analysis and potential picks for the Flyers to target in the draft, let's first take a brief look at their most recent first rounders:

Well, Ivan Provorov, Travis Konecny and Travis Sanheim are the next three first rounders on the list and they are pretty much the core of the current Flyers roster. That is followed by Sam Morin, Scott Laughton and Sean Couturier. The Flyers like to develop their highly drafted players (the Phillies and Eagles should pay attention).

So, first-round picks are pretty important in the NHL — especially to the Flyers. That is pretty obvious. And Jay O'Brien (who is still just 20) and German Rubstov (just 22) not withstanding, they've had an incredibly high hit rate.

In Tuesday night's draft, Philadelphia is expected to be targeting a forward in the first round. Here are sone snippets from mock drafts around the hockey media world.

We'll start off with a high-risk, high-reward option for the Flyers in a very talented but oft-injured goal scorer.

Here's some color on the 18-year-old prospect from the Hockey Writers:

Hendrix Lapierre started this season looking like a sure-fire top-10 pick, but a series of injuries, concussions and neck injuries) have seen that drop. Sometimes out of the first round altogether. However, while there are questions about his durability, there are no questions about the level of talent. He could very well be one of the best playmakers in the class. If his health concerns are behind him, he will be a likely candidate to shoot up re-drafts for years to come.

Looking at how he fits into the Flyers system, he would join a young core that is looking very promising. I think he could truly challenge Morgan Frost for the title of top Flyers prospect. Imaging him being the eventual replacement of Claude Giroux is not completely out of the question. This selection could be one of the better picks of the first round if Lapierre reaches his potential.  [TheHockeyWriters.com]

ESPN has the Flyers targeting a trendy pick in Bourque, and descriptive terms we found across the internet for him will get fans excited: smart, creative, dangerous (with the puck). Here's a brief synopsis of why ESPN's experts think he's a fit in Philly:

Bourque has been one of the big risers of the draft season, and while he doesn’t necessarily fit Philly’s draft profile, he provides a lot of value if he’s still on the board. He put up big-time points in the QMJHL last season. Though he needs to get stronger and a little meaner, he has the tools to make plays at the next level.  [ESPN]

You really need to read The Athletic's entire mock to get all the context for this pick, but Perreault is an extremely good skater who scored a whopping 70 points in 57 games last year in the Ontario League. If he is around at 23, he could be a big offensive contributor when he hits the NHL.

Some teams think the Flyers will take Brandon center Ridly Greig, but that may just be connecting the fact his father scouts for the team. I’ve heard Chicago winger Sam Colangelo mentioned here, but Perreault is more of a souped-up version of Colangelo.  [The Athletic]

Gunler is a safer pick — if he is there at 23, he has been labeled as the mock draft choice by nhldraftsite.com and by thescore.com. Here's more from John Matisz and Josh Wegman:

The Flyers lack elite snipers, and Gunler is a pure goal scorer. He potted 27 goals in 31 games in the Swedish junior league during the 2018-19 season. His transition to the SHL last year wasn't as smooth (four goals in 49 games), but he still impresses with his release and goal-scoring instincts. His game away from the puck needs work, but keep an eye on him in the 20s.  [thescore.com]

Sports Illustrated and The Hockey News see Philly going in a different direction, and adding some more talented young defenders to their stockpile.

Guhle is an excellent skater who moves the puck well and has a strong, physical component to his game as well. It's really a toss-up between Guhle and Schneider, so the Flyers get a good one to continue getting depth on their back end.  [Sports Illustrated]