All goalies carry superstitions. The sport of hockey is filled with them.

They could be as mundane as being the first one off the ice, or the last one to get off it, to Wayne Gretzky tucking the right side of his jersey into his hip pad, while leaving the other side out, to legendary late Flyers’ coach Fred Shero carrying rosary beads — though he wasn’t Catholic — to Ron Hextall slamming his stick against the goalposts during lulls in the game to release some pent-up intensity.

Flyers’ back-up Alex Lyon was so superstitious he would count the steps he took from his bed to the shower in the morning. He would count how many times he would towel himself off after showers, brush his teeth a certain way, where his whole day would be a superstition before games.

“You start the season off with a couple of things, and it builds and builds, and one thing throws you off, and you get pissed off,” Lyon said. “It’s why I got rid of all the superstitions and why I don’t regard any one game bigger than the other. I don’t think about it in those terms at all, like it’s a bigger game than any other.

“I’m superstitious in a way I’m [actually] anti-superstition. In juniors, I was extremely, extremely analytical, and extremely superstitious. That totally wiped out my game. When I played in Omaha in the USHL, I had things like I would count how many steps I would take from my bed to the shower in the morning.

“My day became a superstition and it became so exhausting. It’s why I got rid of all the superstitions. I concern myself with stopping the puck to the best of my ability. I also think there is a lot to be said for these guys in here accepting me. The nature of pro hockey is guys moving up and down, and it takes time for guys to get comfortable with one another. I think it flies under the radar how high the quality of people are we have here. It goes a long way.”

Perhaps that explains why Lyon played such a huge role in the Flyers’ weekend, making 23 saves on 25 shots in the Flyers’ 4-2 victory at Carolina on Saturday night — scoring four goals in the third period. When nothing was going right, it was Lyon that kept the Flyers in the game, sticking out his right pad to stone Noah Hanifan twice near the end of the first period, then managing to steer away a deflected shot from Brock McGinn midway through the second.

Going into the weekend, the Flyers were 1-6-1 over their last eight games. It didn’t help that the Flyers offense was floundering in the opening two periods against Carolina, and it was Lyon, 25, that made it possible in a game the Flyers had to win.

Once again, the enigmatic Flyers find themselves in a good place to earn a playoff spot, sitting in third place in the NHL’s Metropolitan Division with a 37-25-11 record, with 85 points. They’re four points behind the Metropolitan Division-leading Washington Capitals, who the Flyers beat on Sunday, and just two points behind the two-time defending Stanley Cup champion Pittsburgh Penguins.

I guess to try and put it into perspective, these are basically all playoff games right now... We’re in the middle of a battle here and every point that we can gain is critical.

If the Flyers do make the playoffs, they’ll have to thank the superstitious-free Lyon, who credits a new attitude for his success. He came on in relief of Petr Mrazek in a Flyers’ 5-3 loss on March 15, stopping all 18 shots on him. In his last two games, Lyon has made 41 saves on 43 shots.

“I was really impressed with [Lyon’s] play, I thought he did a heck of a job,” said Flyers’ coach Dave Hakstol, whose team was 34-31-8 with nine games left last season. “There were half-a-dozen saves that were high-level saves. He made good saves throughout the night. We needed a win for a lot of different reasons. We needed the two points, but as much, we needed a win for our group in here to have something to show for their hard work.”

The Flyers never trailed against Washington, and they're 3-1 against them this year with nine games left. Five of those nine games (New York Rangers twice, Detroit, New York Islanders, Carolina) are against teams currently out of the playoff picture, while four are against playoff-contending teams (Boston, Pittsburgh, Colorado, and Dallas).

This past weekend was important for the Flyers in establishing some foothold towards the postseason.

“I guess to try and put it into perspective, these are basically all playoff games right now,” Hakstol said. “We went for a pretty long stretch here where we lost a bunch of points and you don’t get a chance to get those back. We’re in the middle of a battle here and every point that we can gain is critical. To be able to do that last night and come back with what I think is a real gutsy effort here [against Washington], on a back-to-back effort against a really good hockey team, those are good points for us and they’re real important points.” 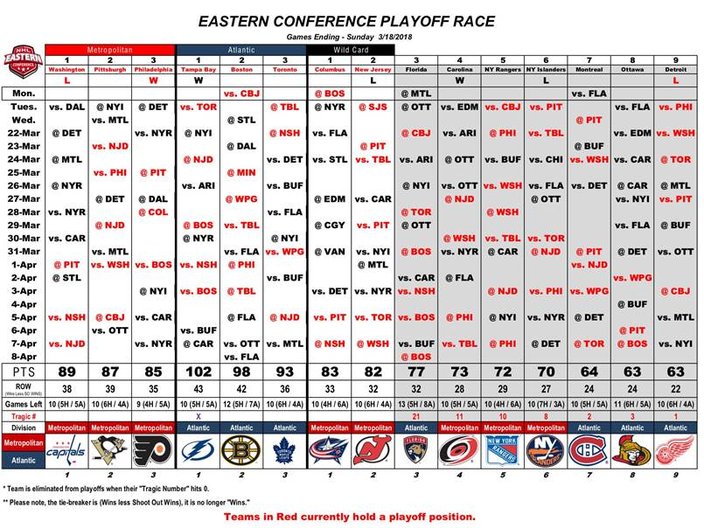