The Flyers' best moments of the 21st century 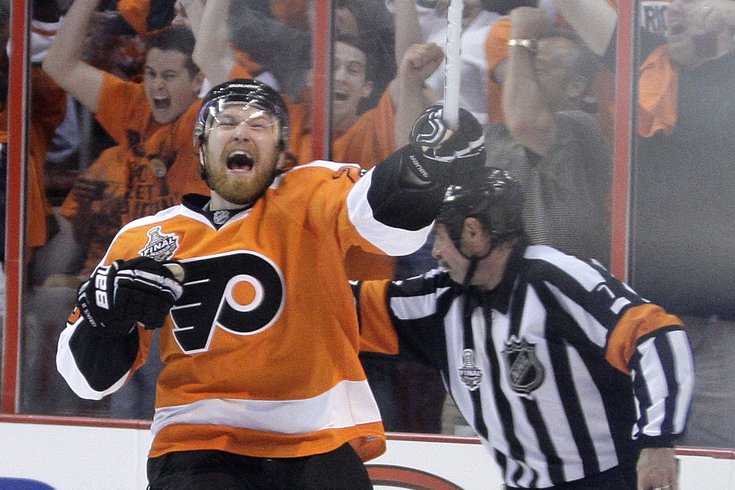 Claude Giroux celebrates his OT winner in Game 3 of the 2010 Stanley Cup Final to get the Flyers back into the series.

Who said the good times had to stop?

Last week our own Shamus Clancy capped off his "Best Week" series with the Eagles' 25 best plays this century. Originally, the list was going to cover all four of the major Philly teams, but when the Eagles section quickly grew out of hand, we realized it was better to give each team their own list and their day in the spotlight — believe us, we can go on for hours with each one and we know you can too.

Today it's the Flyers' turn.

To say things have not been great with them recently is a massive understatement. It wasn't always this bad — not to say that the past decade as a whole was particularly memorable — but there's been plenty of incredible moments for the franchise since the turn of the century, and even though none of them have resulted in winning the Stanley Cup, the majority of them have become fixtures of Flyers lore.

• May 4-5, 2000, Eastern Conference Semifinals, Game 4: You know this one well by now. The Flyers and Penguins just kept going and going and going in the longest game ever in the modern era of the NHL, 92:01. Keith Primeau, in the 5th overtime, dragged a shot over the shoulder of Ron Tugnutt. The Flyers won, tied the series 2-2, and went on to win the series in six games.

• May 2, 2004, Eastern Conference Semifinals, Game 5: The Flyers crushed Toronto 7-2 and took a 3-2 series lead thanks to a playoff hat trick from the captain.

• May 4, 2004, Eastern Conference Semifinals, Game 6: Sami Kapanen got checked so hard by Darcy Tucker he couldn't find his way back to the bench, but play continued on. Jeremy Roenick came back down the ice and scored to send the Maple Leafs home for the second straight year and send the Flyers to the Eastern Conference Finals.

• April 22, 2008, Eastern Conference Quarterfinals, Game 7: I remember watching this series as a kid and thinking how weird it was. The Flyers had jumped out to a 3-1 lead after Mike Knuble scored in double overtime to win Game 4. That should've been the backbreaker. In most cases, it would've. But it wasn't here. The Capitals — with that young core of Alex Ovechkin, Nick Backstrom, and Mike Green — won the next two to force a Game 7 in Washington, then battled the Flyers into overtime again. Joffrey Lupul put away that rebound to end it, and that was pretty much his lone Flyers highlight. I also remember a beer bottle getting tossed at Jeff Carter from the stands in his postgame interview. Strange series. Strange time. Those Reebok EDGE jerseys are so odd looking in retrospect.

• April 11, 2010, Game 82: Danny Briere and Claude Giroux scored in the shootout, Brian Boucher shut the door, and the Flyers make the playoffs on the last day of the season. You know how it goes from here.

• May 7, 2010, Eastern Conference Semifinals, Game 4: The Flyers entered the night down 3-0 in the series to the Boston Bruins. They traded goals back and forth, then Simon Gagne scored in overtime to keep the Flyers alive for just one more game. It's 3-1.

• May, 14, 2010, Eastern Conference Semifinals, Game 7: A game emblematic of the entire series. The Flyers fell into a 3-0 hole early. Peter Laviolette called a timeout and you could see him telling the team to just get one on the broadcast. An awkward shot from James van Riemsdyk trickled between the pads of Tuuka Rask. There was one. Scott Hartnell put home a rebound. That's two. Danny Briere wrapped around the net and bounced the puck off a Bruin and in. Three. A rebound falls right in front of Gagne. That's four and the lead. The Flyers have to protect the lead for seven minutes. A young Claude Giroux does everything he can to kill the clock. They hold on. "A comeback of epic proportions comes complete."

• May 24, 2010, Eastern Conference Finals, Game 5: Montreal was never going to stop this train, and on "The Shift," they had no chance of stopping Mike Richards. The Flyers captain was everywhere and capped things off with a backhander into an empty net after Jaroslav Halak and Roman Hamrlik collided trying to beat him to the puck. The Flyers went on to win 4-2 to clinch the Eastern Conference and challenge Chicago for the Stanley Cup. A Cinderella run continued.

• June 2, 2010, Stanley Cup Final, Game 3: The series went to the Wachovia Center with the Flyers down 2-0, but it wasn't over yet. The puck bounced off of Claude Giroux's skate and into the net in overtime, he pumped his fist and yelled as his teammates mobbed him along the boards and the arena went crazy. The Flyers still had life.

• April 24, 2011, Eastern Conference Quarterfinals, Game 6: Chris Pronger had a broken hand and had his role basically reduced to 'sit on the bench and look intimidating.' The goalie carousel was going a mile a minute between Sergei Bobrovsky, Michael Leighton, and Brian Boucher, and the Sabres had the Flyers' backs to the wall with a 3-2 series lead with Game 6 in Buffalo. And yet, Danny Briere, Scott Hartnell, and Ville Leino powered the Flyers through. Briere scored twice, Hartnell tied the game in the third, and Leino scored the overtime winner after the puck fell to his feet in a scramble in front of the Sabres' net. The Flyers went back home and closed out the series. The Sabres haven't been back to the playoffs since, and that second-round rematch against Boston we're just not gonna talk about.

• January 7, 2012: A week after Danny Briere was stopped by Henrik Lundqvist on the penalty shot at the Winter Classic, he pretty much let all his frustration out against the Senators. Briere scored all three of the Flyers' goal, topped off by the overtime winner to complete the hat trick, and fought just a slightly bigger Kyle Turris. Not sure anyone had Briere getting into a fight on their bingo card that day. Nevertheless, I was in the stands for that game. It was crazy. The "Danny!" chants were rampant.

• April 1, 2012: This one set the stage for an all-time playoff series. The Flyers had the game in the bag, the Penguins sent their fourth line out, Joe Vitale caught Danny Briere in open ice, everyone fought. Craig Berube had to restrain Peter Laviolette from climbing over to the Penguins' bench. That's how heated the rivalry had gotten. Craig Berube had become a peacekeeper. Craig Berube.

• Flyers-Penguins series, 2012: Honestly, this series can fill out an entire article itself, but this post is already getting lengthy as is. So in short: THIS SERIES WAS AMAZING. The Flyers climbed out of a 3-0 hole in Game 1 to win in OT. Giroux and an 18-year old Sean Couturier both had hat tricks and Ilya Bryzgalov made one of the best saves you'll ever see to win Game 2. The Penguins came to Philadelphia for Game 3 and got completely destroyed, then somehow bounced back and dropped 10 goals in Game 4. Then it took Game 6 and that first shift from Giroux to send Sidney Crosby and the Penguins away for good, all while making it absolutely clear that he was the next captain of the Philadelphia Flyers. This series was just shy of two weeks' worth of chaos and man, was it fun.

• March 18, 2014: With time expiring in overtime against Chicago, Giroux crosses the blueline and fires a quick shot on. It went in. As close of a buzzer-beater as you could get.

• April 29, 2014, Eastern Conference Quarterfinals, Game 6: With the Flyers' backs to the wall once again, this time against the Rangers, Wayne Simmonds scores a playoff hat trick to force a Game 7.

• February 23, 2016: Shayne Gostisbehere's roar might still be echoing through the rafters. Down 1-0 to the Devils, the rookie defenseman received the puck in the high slot and ripped a shot through New Jersey's entire penalty kill. It tied the game — though the Flyers would eventually lose in overtime — and marked Gostisbehere's 11th straight game with a point, a Flyers rookie record and an NHL record for first-year defensemen.

• April 9, 2016: It was win-and-in for the Flyers and it meant everything. Lauren Hart sang "God Bless America" with her phone out, an ailing Ed Snider was on the other end through FaceTime. Wayne Simmonds scored the first two and Pierre-Edouard Bellemare intercepted a pass late, sprinted toward the goal and put away the empty-netter. The Flyers beat the rival Penguins, 3-1 and clinched a playoff spot under first-year coach Dave Hakstol. The players went crazy on the bench. It meant everything. Snider passed away two days later.

February 23, 2019, Stadium Series: A rain-soaked night at the Linc was marked off by an iconic goal from Giroux, a comeback win, and a big sendoff for Simmonds, who was traded to Nashville shortly after. Oh yeah, and Gritty went streaking. That must've been what threw the Penguins off so badly. Still, this was ultimately two points in what became another lost season, which really says a lot about the recent state of the franchise.

Oct. 9, 2019: This was a do-or-die year for the roster the Flyers were building up, and they made a statement win with their 2019-20 home opener. Carter Hart recorded his first career shutout in a 4-0 win over New Jersey, highlighted by a complete robbery of Taylor Hall on a one-timer.

• January 11, 2020: After being diagnosed with Ewing's Sarcoma a month earlier, Oskar Lindblom received a standing ovation from the Wells Fargo Center crowd when he was shown in the building for the Flyers' game against the Tampa Bay Lightning.

• August 21, 2020, Eastern Conference First Round, Game 6: Something was off about the Flyers once their series against an upstart Canadiens squad began inside the Toronto bubble. After six games, their skill and experience ultimately won out after six games, but they were just barely scrapping by and each one. Still, they beat the Habs for their first playoff series win in eight years and went on to push the Islanders to seven games. After that, everything fell apart.

• September 3, 2020, Eastern Conference Second Round, Game 6: Lindblom had beaten his cancer diagnosis and returned to the ice to stick taps for his first game in months. After two overtimes, Ivan Provorov scored to force a Game 7 against the Islanders and ensure he played at least one more.

March 17, 2022, Claude Giroux's 1,000th game: A celebration of a remarkable milestone, and even though it couldn't be outright stated, the captain's farewell party.