Best Week: The 25 best Eagles plays of the 21st century 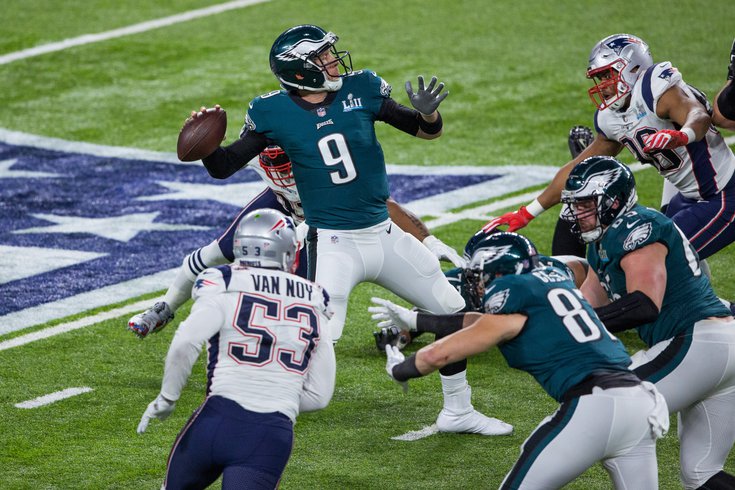 It's the end of "Best Week" here on PhillyVoice. I vented during "Worst Week" about some of the roughest moments in Philadelphia sports before taking things on the upswing over the last several days. I celebrated Nick Foles, Shane Victorino, Doug Pederson and Jason Kelce, all people who contributed to championships in the city.

Last Friday, I wrote about one of the worst plays in Philly sports history: Kawhi Leonard's game-winning shot in Game 7 of the 2019 Eastern Conference Semifinals. Toronto would go on to win the title and the Sixers are still left reeling, as that looks to be this era's best chance of winning a championship in retrospect. Not great!

This marks the end of this two-week running feature, so instead of nailing down a single play to wax poetically about, I'm just going to list a bunch. It's Friday, let's run wild! To be perfectly honest, I was going to do this for all of the Eagles, Flyers, Sixers and Phillies, but I started writing about the Birds and it was going on and on, so I'm making it just them to wrap this up. I'm going to keep things to the 21st century for the sake of brevity and because I'll be able to give a deeper analysis of things that I recall watching over the last two decades. If I missed something, feel free to yell at me on Twitter or send me angry email.

I'll do these in chronological order. Live through those moments of yesteryear that were thrilling, but never resulted in the true glory of the Lombardi Trophy before slowing reaching the Promised Land.

Additionally, I've linked to YouTube to watch these plays and in the case of longer videos, linked to the specific time stamps where the plays occurred.

• Week 13, 2000, Eagles at Washington: This was Donovan McNabb's true breakout game in his second NFL season. He rushed for a career-high 125 yards in the win over Washington to move the Eagles to 9-4. The biggest play of the day came in the form of a 54-yard run with the game tied 20-20 late in the fourth quarter. McNabb was shaking Washington defenders out of their cleats. McNabb set up a David Akers field goal that would give the Birds a 23-20 win. (5:56 mark in this video to see)

• Week 4, 2002, Texans at Eagles: Fake punt! The Eagles did a direct snap to halfback Brian Mitchell, who threw a shovel pass Brian Dawkins' way for a 57-yard touchdown. At eight-years-old, this was the game that kickstarted having Dawkins as my all-time favorite athlete. (watch here)

2002 NFC Divisional Playoff Game, Falcons at Eagles: The last ever Eagles win at Veterans Stadium (don't ask me what happened in the game after this). With the game still scoreless in the first quarter, cornerback Bobby Taylor picked off a pass from (future Eagle) Michael Vick, taking it 39 yards back to the house. The Vet was ROCKING. The Birds would never lose that early lead, winning 20-6. (watch here)

Week 7, 2003, Eagles at Giants: This isn't the last miracle that'll appear on this list. The Birds were in a 2-3 hole to begin the season. With fewer than two minutes remaining and the Eagles trailing 10-7, the Giants were punting. This was the "Welcome to the Moment" game for Brian Westbrook, who returned it 84 yards and reached the end zone. An autographed picture of B-West taking running down the sideline is hanging in my parents' basement. Westbrook's heroics would begin a nine-game winning streak for the Eagles. (watch here)

• Week 10, 2004, Eagles at Cowboys: McNabb's legendary 14.2-second scramble that resulted in a 60-yard gain was electric. Freddie Mitchell making this list twice is... something. (watch here)

• 2004 NFC Championship Game, Falcons at Eagles: For the first time in my life, the Eagles were going to the Super Bowl. A touchdown toss from McNabb to Chad Lewis sealed things for the Birds, going up 27-10 late in the fourth quarter. It was Lewis' second tuddie of the day. Lewis, however, suffered a Lisfranc injury on the play and would miss the Super Bowl. (10:34 mark in this video for the first of two TDs).

• Week 5, 2006, Cowboys at Eagles: It was Terrell Owens' first game back in Philly. With Dallas down one score and the ball at the Eagles' six with 32 seconds remaining, the Cowboys could've sent this baby to overtime. Lito Sheppard wasn't having any of that though. He picked off a pass from Drew Bledsoe and went 102 yards to pay dirt, capping off one of the most memorable Eagles regular season games of my life. (watch here)

• Week 10, 2010, Eagles at Washington: Absolute fireworks! The Eagles blew the doors off Washington in a wild 59-21 Monday Night Football win. The game's greatest play was its first from scrimmage: a play-action bomb from Vick to DeSean Jackson that went for an 88-yard touchdown, kicking off one of the greatest offensive performances in team history. (watch here)

• Week 15, 2010, Eagles at Giants: "He ran around until all the zeroes were on the clock and the Giants fans can't believe it and the Eagles have just pulled off the most remarkable win I have ever seen." (3:59 mark in this video)

• Week 14, 2013, Lions at Eagles: The Snow Bowl! LeSean McCoy dashed through the snow in a Philly blizzard for a 57-yard touchdown run that gave the Birds a lead they wouldn't relinquish. (4:00 mark in this video)

• Week 2, 2017, Giants at Eagles: Mr. 61! This will be the lone regular season play I include from the Super Bowl run because that could be its own way-too-long list. Jake Elliott went from a guy no one had ever heard of to a guy who will be remembered forever in Philadelphia on his improbable field goal make. (watch here)

• 2017 Divisional Playoff Game, Falcons at Eagles: If Foles doesn't fire a pass of Atlanta safety Keanu Neal's knee that lands into the arms of Torrey Smith, do the Eagles still win the Super Bowl? I think not. It put the Birds in a position to get a late first half field goal to cut the Falcons' lead to one. Atlanta would not score in the second half and the Eagles would add a touchdown that gave them a win. (watch here)

• 2017 Divisional Playoff Game, Falcons at Eagles: We should all go through life with the confidence of Jalen Mills. His sticky defense on Julio Jones finished off the Falcons' hopes of reaching the Super Bowl for the second-straight year. (watch here)

• 2017 NFC Championship Game, Vikings at Eagles: I wrote about the Patrick Robinson interception changing my life on Monday. It only gets better every time I rewatch it. (watch here)

• 2017 NFC Championship Game, Vikings at Eagles: Foles just aired it out like only he could in a midnight green jersey! The pass to Alshon Jeffery with fewer than two minutes remaining in the first half for a TD put the Birds up 21-7. I knew the Eagles would win after PatRob's pick-6. I knew they were going to smash the Vikings after that 53-yard score.

• 2017 NFC Championship Game, Vikings at Eagles: The call. The pitch. The throw. The catch. Foles' flea flicker touchdown toss to Smith was the icing on the cake for the 38-7 party.

• Super Bowl LII, Eagles vs. Patriots: Alshon Jeffrey's catch over former Eagles Eric Rowe for the first touchdown of Super Bowl LII blows my mind. Foles put it in the perfect spot and Jeffrey, who came to Philly to be a jump-ball threat who could go up and get it at the high point, did just that. Everyone was screaming at the Super Bowl party I was at and I just sat there in disbelief at what I was watching in the midst of a four-hour panic attack.

• Super Bowl LII, Eagles vs. Patriots: The absolute stones on Foles to suggest "Philly Philly" and on Doug Pederson for going through with it. My mom jumped in front of me during Trey Burton's pass and I didn't see Foles come down with it to be honest. The roar in the living room let me knew that BDN hauled it in though. If the Eagles didn't convert on this fourth-down play right before half and the team lost the big game, Pederson would've been run out of Philly with torches and pitchforks. (watch here)

• Super Bowl LII, Eagles vs. Patriots: Have you ever seen some sling a football with zero fear between three defenders the way Foles did on his touchdown throw to Corey Clement? Sorry, Boston fans, this was a catch. (watch here)

• Super Bowl LII, Eagles vs. Patriots: Cris Collinsworth having a conniption when the Eagles scored the game-winning touchdown for their first Super Bowl win owns my brain. I think I speak for all of Philadelphia in that I may have uttered a few obscenities about Collinsworth during the review process on Zach Ertz's fourth quarter, go-ahead score. What a pass, what a catch! (watch here)

• Super Bowl LII, Eagles vs. Patriots: The Philly Special has all the flair, but Brandon Graham's strip sack on Tom Brady is the most important play in the history of Philadelphia sports, not just the Eagles and not just in the 21st century. Like I talked about above, I was not very cheery during the Super Bowl and frozen with anxiety for nearly the entire game. The moment I gave in and realized they were actually going to win the whole darn thing? It was after this was officially ruled a fumble with an Eagles recover, crying like a baby. I also thought the Eagles were going to get Tuck Rule-d here, but, for the city of Philadelphia, that's fortunately not the case. (watch here)

• 2018 Wild Card Playoff Game, Eagles at Bears: Golden Tate didn't even know the play when the Eagles faced fourth and goal at Chicago's two yard line. It didn't matter though because Foles was under center, leading the Birds to yet another playoff win. Foles hit Tate for the game-winning touchdown with less than a minute left on the clock in the fourth quarter. I was seriously convinced after this play that the Eagles were going to win back-to-back Super Bowls and I would end up with a Foles tattoo somewhere on my body. (3:35 mark in this video)

• 2018 Wild Card Playoff Game, Eagles at Bears: Talk about a bang-bang play. The infamous "Double Doink" broke the Bears' organization and they have yet to recover. (watch here)