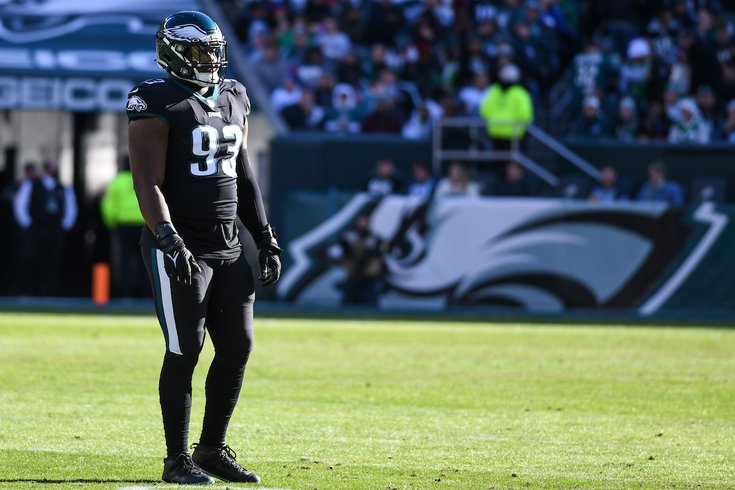 Heading into the 2022 season, the Philadelphia Eagles have a strong roster, but question marks persist at quarterback, where Jalen Hurts will need to make significant strides forward if the Eagles are to go from playoff contenders to Super Bowl contenders.

A breakout season from Hurts in his third season would have major ramifications both in the short-term and long-term outlooks of this team. That's obvious. Here are five additional Eagles players who are in a position to have breakout seasons. To note, we are not including rookies here, so you won't find Jordan Davis or Nakobe Dean below.

Dickerson tore an ACL in the SEC Championship Game in December of 2020, and he missed the entirety of 2021 Eagles training camp as a rookie. He wasn't activated from the PUP/NFI list until August 30, fewer than two weeks before the start of the regular season.

He was thrown to the wolves Week 2 against a tough San Francisco 49ers defense after Brandon Brooks went down with a pectoral injury. Dickerson had some early struggles, as should have been expected, but as the season continued he became a good starter, playing both at RG and LG.

In the back half of the season, Dickerson combined with Jordan Mailata on the left side to form a bulldozing duo that helped make the Eagles the No. 1 rushing offense in the NFL.

Had Dickerson not been saddled with a laundry list of injuries, he very likely would have been a first-round pick in the 2021 NFL Draft. He has that kind of ability, when healthy. Heading into his second season in the NFL, Dickerson has been on the field instead of in the trainer's room. During the 2022 season, he will be thinking more about dominating than he was as a rookie, when he was really just trying to survive.

With DeVonta Smith heading into Year 2 after a record-breaking rookie season, as well as the addition of A.J. Brown, Watkins is sort of the forgotten guy at wide receiver, but he had a pretty good season last year, with 43 catches, 647 yards (15.0 YPC), and 1 TD after a standout training camp.

Watkins would have had better stats if he didn't play in the most run-heavy offense in the league with a quarterback who didn't maximize opportunities to get him the ball down the field. But as a sixth-round pick out of Southern Mississippi, Watkins has quickly adapted to the speed of the NFL.

Watkins' 2022 production is arguably more dependent on Hurts' progression as a quarterback than the Eagles' other receivers because his best attribute is his ability to take the top off the defense with his 4.35 40 speed. If Hurts' game as a passer improves in 2022, Watkins will have a bigger impact on the Eagles' offense, even if he's going from WR2 to WR3.

It's Gainwell's contributions in the passing game that will be interesting to monitor heading into the 2022 season. Gainwell often lined up in the slot in 2021, and Nick Sirianni would occasionally try to scheme up short throws to go his way, with mixed results.

It’s notable that Gainwell seemed to be a part of the game plan in the playoffs, as he was targeted five times against the Buccaneers. He caught all five targets for 49 yards and a TD. During the regular season, Gainwell had 5.1 yards per target, a number that must improve in 2022 to justify his usage in the passing game, with the addition of other legitimate offensive weapons.

Williams played a mix of DT and the Brandon Graham role in the Eagles' defense during training camp and the preseason, but after Graham went down Week 2, Jonathan Gannon played ill-fitting guys like Ryan Kerrigan and Josh Sweat in that spot instead of Williams, who instead mostly played at DT. It would have been nice to see him get more snaps in that role, but 🤷‍♂️.

Williams finished his rookie season with 30 tackles (6 for loss), 2 sacks, 6 QB hits, and 2 batted passes. He flashed down the stretch and gave the Eagles reason for optimism in his play in 2022 and beyond.

In an Eagles defensive front that includes Fletcher Cox, Javon Hargrave, and now Jordan Davis, Williams will be part of a rotation at defensive tackle that can rotate in and out of games, staying fresh against interior offensive linemen tasked with blocking a variety of players with different skill sets. He'll have the chance to thrive whenever he is given opportunities.

The Eagles had a rare season in 2021 which they did not suffer many injuries at cornerback. With the exception of the Eagles' meaningless Week 18 game against Dallas, Darius Slay, Steven Nelson and Avonte Maddox did not miss a single game.

As a result of the Eagles' health at corner, McPhearson did not get as much playing time in 2021 that he might have some other season. He was a core special teamer, playing 325 snaps on those units, including a role as a gunner on the punt coverage team, but he only played 179 snaps in the regular defense. Had the Eagles suffered an injury to Slay or Nelson, McPhearson likely would have started in their place.

In 2022, McPhearson will head into training camp as the top backup to Slay and/or James Bradberry. He could also potentially sub in for Avonte Maddox, depending on whether he proves he can play in the slot at the NFL level, like he did at times in college.

Earlier this offseason, we took a close look at McPhearson's 2021 season. He was sticky in man coverage, but also grabby. In zone, he was typically in the right place and he seems like a smart player. As a tackler, McPhearson got his man on the ground when he wrapped up, but he also went ankle diving on occasion. The Eagles will want to see him be more physical in that department.

The Eagles are unlikely to have the same injury luck at corner in 2022 that they had in 2021, and they'll need one of their young corners to step up, with McPhearson serving for now as the most likely first guy off the bench.