Best Week: Sixth-round pick Jason Kelce is the steal of the century 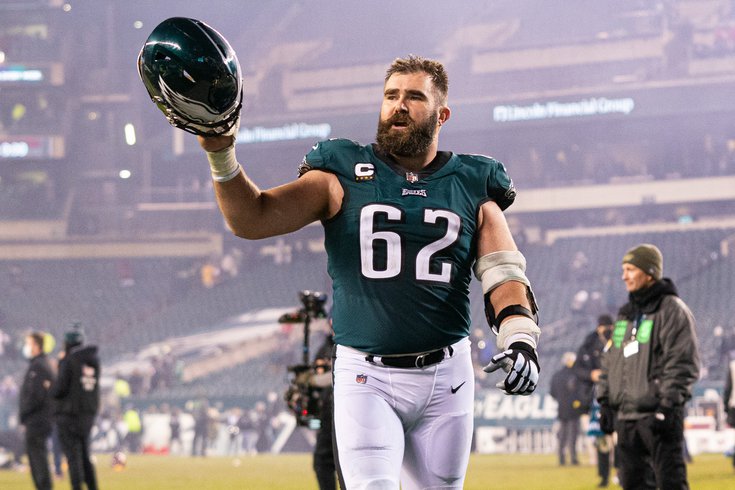 Best Week rolls on! Last Thursday, I tried to find a cathartic release when writing about the infamous Danny Watkins draft pick in 2011. Conversely, who's the best Philly draft pick? I'm going with a guy who was taken in that same draft as Watkins, an undersized center who started his collegiate career as a walk-on running back at Cincinnati.

Jason Kelce could've simply been a forgotten late-round selection who only the hardest of hardcore Eagles fans remembered. That would've been the norm for a sixth-round selection taken with the 191st-overall pick. There's nothing, however, normal about Jason Kelce.

There are obviously a ton of Philly sports picks, not just Eagles draft selections, who could have come down with this distinction. The Eagles don't win the Super Bowl without first-round picks Carson Wentz, Brandon Graham, Fletcher Cox and Lane Johnson. Nick Foles was a third-round pick. Harold Carmichael is in Canton after being a seventh rounder. Mike Schmidt might be the best second-round pick in baseball history. The Philadelphia Warriors landing Wilt Chamberlain with a top-three selection changed hoops in this city. Bobby Clarke went from being a second rounder to an inner-circle Hall of Famer. For my lifetime though, considering the value gotten from a sixth rounder, Kelce is the choice for me.

There is just one sixth-round pick in the Pro Football Hall of Fame: Lions defensive back Jack Christiansen, who was the 69th-overall pick in 1951. Kelce will join him in Canton one day. Obviously, there are way more NFL teams in 2022 than there were in 1951, which makes Kelce's standing as a premier interior lineman and one of the most beloved Philadelphia athletes ever even more astounding.

Kelce is an anomaly. An athletic marvel at center with his speed and agility that allows him to get the second and even third level of the defense is something I haven't seen in my two-plus decades watching football. It's no surprise that Kelce once played running back and fullback given that skill set, but it's even more improbable that a guy who can move like that also has the power to anchor what's consistently been one of the NFL's best offensive lines.

In the 2011 NFL Draft, just three sixth rounders have made a Pro Bowl: Tyrod Taylor (once), Dwayne Harris (once as a special teamer) and Kelce (five times). He's the only one to have been named to the All-Pro First Team, having done so four times. A sixth-round center who turned in a handful of years as a successful starter would've been a fantastic outcome. That player turning into an All-Pro, a god-like figure in Philadelphia and a future Hall of Famer blows my mind.

Not to keep crushing Watkins like I did last week, but the juxtaposition between Watkins, the Eagles' first-round pick, and Kelce, the Birds' sixth-round pick, is so stark. Here's what I wrote in my "Worst Week" Watkins story:

Nothing sums up the crapshoot that is the NFL Draft better than the Eagles in 2011. With the 23rd pick, they selected Watkins. With the 191st pick, they selected another offensive lineman, an undersized center by the name of Jason Kelce. One lives in infamy and the other has his face tattooed on Philadelphians in his honor.

Kelce has flirted with retirement over the last few years but is nevertheless still going strong. He was rightfully a First-Team All-Pro pick this past season. He's gotten those accolades across three different coaching regimes and with a string of different quarterbacks lining up behind him. Kelce persevered, survived all these changes, and remains the beacon of stability that's kept this franchise afloat on the field despite whatever turmoil has reared its head.

If the Birds win another Super Bowl with Kelce holding things down on the offensive line, the world will not be ready for the second installment of Kelce's victory parade speech.