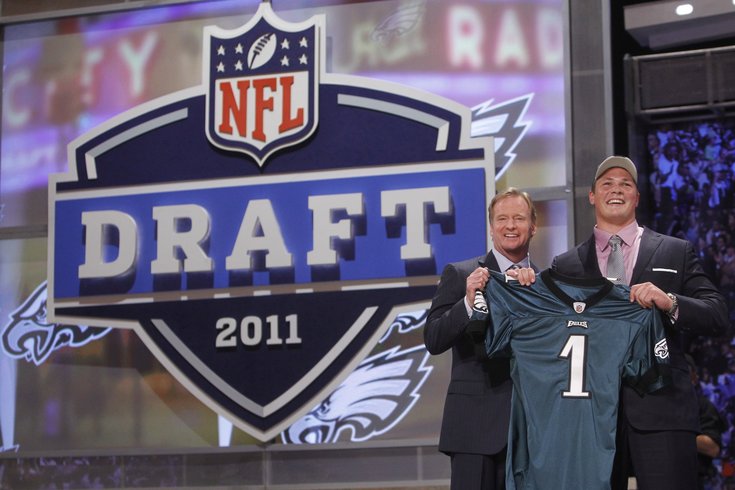 Worst Week comes to a close! I've complained about Andy Reid, Cliff Lee, Chip Kelly, Eddie Jordan and Kawhi Leonard over the last few days. I've been bringing the heat and the man I'm talking about now could certainly put out that fire.

It's been 11 years since the 2011 NFL Draft. The Eagles were coming off an electric 2010 season in which Michael Vick took the starting quarterback job and had a renaissance. He rushed for a career-high nine touchdowns and turned in his best passing season with career highs in completion percentage, touchdown passes and quarterback rating. The Eagles won the NFC East for the first time since 2006. People were talking Super Bowl and then all those "Dream Team" acquisitions started piling up.

Grabbing a couple of key players during that 2011 draft would've obviously been great for the Eagles to meet that fan hype. To kick things off, the Eagles drafted a 26-year-old Canadian firefighter named Danny Watkins with the 23rd-overall pick. Watkins was an offensive guard. Only a couple of guards go in the first round every year given that the position is deemphasized compared to, say, offensive tackle or defensive end. A 26-year-old prospect hadn't gone in the first round since 1971 (a 28-year-old player was also drafted that year).Firefighters, unsurprisingly, usually aren't drafted. It was a confluence of "WTF" factors.

Watkins is the worst Eagles first-round pick of my lifetime.

Where are the firefighter jokes coming from? Watkins, a British Columbia native, became a junior firefighter at 16 with the West Kelowna Fire and Rescue squad. He enrolled in community college in California to study fire sciences and become a full-time firefighter. Given his massive size at 6'3" and 310 pounds, he drew the attention of Butte College's football coach. At the age of 22, Watkins played football for the first time.

He then transferred to Baylor under Art Briles (yikes), played offensive tackle and found himself an early round prospect for the 2011 draft given his physical traits. I guess Reid and general manager Howie Roseman couldn't resist!

Despite his aging curve, Watkins didn't even start at the beginning of the 2011 season given how he performed in camp. He was way behind in terms of technique and understanding the game, given how late he came to the sport in his life. He was inactive for three of the Eagles' first four games. He was a 26-year-old first-round pick and couldn't get on the field! That doesn't make any sense!

Watkins ultimately started 12 games at right guard, started six more in a terrible 2012 season and was released in August 2013. Yes, that is a brutal career for a first rounder, but it's what happened off the field for Watkins that has given him such a notorious standing in Eagles lore.

As I've been getting at, Watkins really wanted to be a firefighter. Why was Watkins playing so poorly on both the practice field and on NFL Sundays? It may have been because of those outside interests...

Here's an excerpt from a 2014 Sports Illustrated profile on Watkins from Emily Kaplan:

[Eagle offensive line coach Howard] Mudd remembers word spreading through the Eagles’ facility sometime during the second half of that nightmare 2012 season. This was Mudd’s 45th year in professional football, as a player and a coach. “Never have I heard something so ridiculous,” he says. “Not in my entire NFL career.”

Danny Watkins was spotted on the 11 o’clock news, in full gear. Not pine green with a white 63 on his chest. Philadelphia Fire Department. Watkins insists it was a misunderstanding, that he was only wearing the gear as part of charity work with his firefighter-related foundation.

As far as the Eagles organization was concerned, they finally had an explanation. This was why their first-round pick was giving them the kind of measly performance they could get from a street free agent. He wasn’t putting in the time, not pulling his weight during the week. Watkins denies it, but those within the organization were certain what they had found: Danny Watkins was moonlighting as a firefighter. [SI]

(LOL at the "pine green" mention)

He was a firefighter! He didn't want to play football. He wanted to be a firefighter. He was drafted to be an important offensive lineman for at least a half-dozen years for a franchise that had made the postseason nine of the previous 11 years and it felt like he wanted to do anything but that. The Eagles were in disarray, sure, but the Watkins selection was one of the many signs that the Reid era was collapsing in Philadelphia.

Listen, if you have a passion in life, go for it. Get after it. I've been stuck at jobs I could've theoretically been good at, but just absolutely hated and went through the motions. Waking up to go to a job you don't care about and wish you weren't doing is a universal feeling that almost everyone has experienced. Fighting fires is Watkins' passion and a worthwhile one at that. Still, don't try to be a professional athlete and incur the wrath of a rabid fan base if that's the case.

Nothing sums up the crapshoot that is the NFL Draft better than the Eagles in 2011. With the 23rd pick, they selected Watkins. With the 191st pick, they selected another offensive lineman, an undersized center by the name of Jason Kelce. One lives in infamy and the other has his face tattooed on Philadelphians in his honor.

If my pessimism was too much for you the last several days, stay tuned for Best Week come Monday. I'll be writing about the best game I ever attended, a night where "anyone could've gotten it."