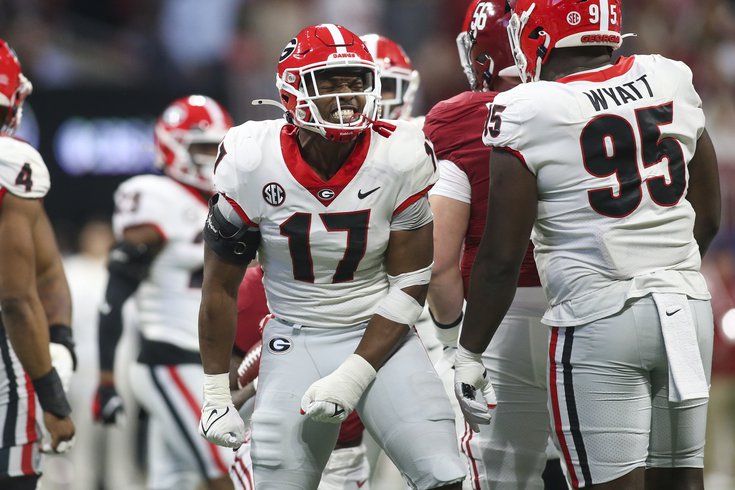 As we do every offseason, we'll be comparing each of the Philadelphia Eagles' rookies to current or former NFL players. Today we'll find a comp for third-round linebacker Nakobe Dean.

First, who did Dean say he patterned his game after?

Dean was a star at Georgia, patrolling the middle of the field in Georgia's smothering, national championship defense. In addition to his team's success, he was a unanimous All-American in 2021 and the Butkus Award winner, which goes to the best linebacker in college football. In his final season at Georgia, he had 72 tackles (10.5 for loss), 6 sacks, 2 INTs, 5 pass breakups, and 2 forced fumbles.

Most draft experts assumed Dean would be a first-round pick, but he fell to the third round because of injury concerns, and the fact that is undersized. And really, to say he's undersized is probably putting it mildly. He's short and light with small hands and short arms.

There were also questions about Dean's athleticism, because he was unable to participate at the NFL Combine or Georgia's pro day.

So in summary, Dean is small with questionable athleticism, but he's an instinctive, productive, smart leader who was probably drafted later than he should have been.

Based on that description, his profile reminds me a bit of former Miami Dolphins linebacker Zach Thomas.

Thomas had terrible testing numbers, as he ran a 4.85 40 with a vertical jump of 28.5 inches. That wasn't quite as devastating to your draft stock in 1996 as it would be in 2022, but he no doubt scared some teams off with that performance.

Like Dean, Thomas was a highly decorated college player who was also a unanimous All-American in his final season at Texas Tech, and a finalist for the Butkus Award. However, also like Dean, he fell further in the draft than he should have, as Miami selected him in the fifth round.

Ultimately, Thomas carved out a stellar NFL career as a three-down linebacker mostly on his outstanding instincts. A look:

Nirvana is a weird choice for a highlight reel. Anyway, give Dean some oversized shoulder pads and a neck roll and he'd look a lot like Thomas.