Mike Trout loves what the Eagles did this offseason 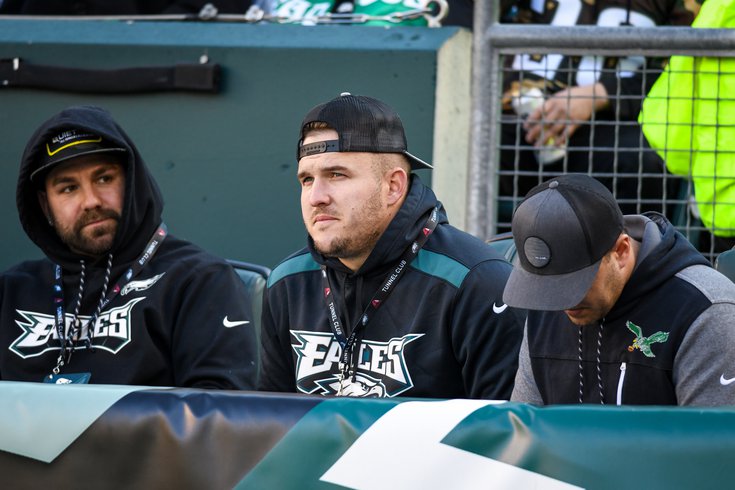 Mike Trout at the Philadelphia Eagles game against the Chicago Bears at Lincoln Financial Field in Philadelphia on November 3, 2019.

Notorious Eagles fan Mike Trout — who also moonlights as the Angels' superstar outfielder and apparently a terrible fantasy football commissioner — always has the Birds on his mind. Always.

The Angels are coming to town this weekend to play the Phillies, setting up for a battle between MVPs Bryce Harper and the two-way phenom Shohei Ohtani, on top of a big homecoming for the Millville, New Jersey native and three-time AL MVP himself.

On Wednesday, with the Angels up in the Bronx for a three-game set against the Yankees, Trout was front and center for a press conference to talk about his first trip back to Citizens Bank Park since 2014, his part in the heated feud between Joc Pederson and Tommy Pham that has oddly become one of the biggest stories in baseball, and of course the Eagles — I mean, it was a pretty crazy offseason, right?

“I love what they did,” Trout told The Inquirer's Scott Lauber. “Obviously a big, big trade, getting [A.J.] Brown. We’ll see what they can do.”

Though by the sounds of it, Trout talking Eagles was a mix of genuine fandom and wanting to skirt the fantasy football controversy... yeah, so good to be coming back, right?

“It was special going back there (in 2014) and playing and seeing how [the fans] treated me,” Trout told Lauber. “I know how passionate they are. When the schedule came out, these are the three games that I circled. I love coming back and seeing everybody.”

The Angels are wrapping up against the Yankees with a doubleheader Thursday then will be in Philadelphia on Friday to kick off their three-game set against the Phils.

He also had an impressive number of Philly callouts during Wednesday's presser.

Mike Trout scrum tally:
- Four, unprompted, mentions of the Eagles
(prompted review of their offseason: "Love what they did.")
- one mention of Wawa

And you'll more than likely catch him at another couple of Eagles games once they get going in a few months.