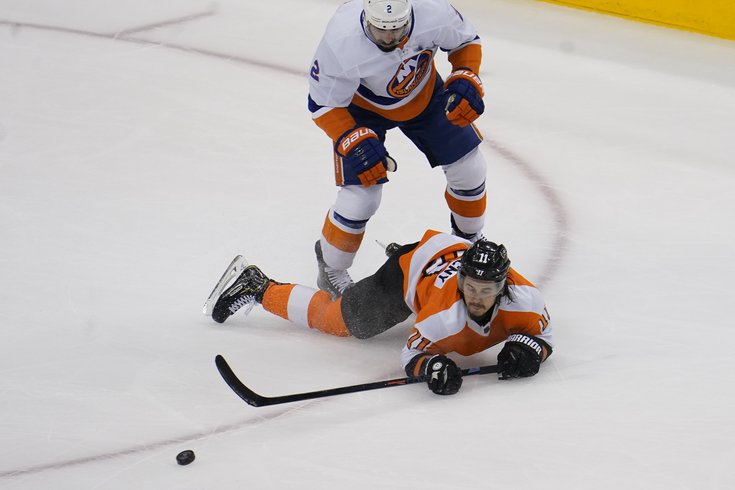 The Flyers season ended with a whimper.

It's really hard to win a Stanley Cup during normal circumstances.

Add in a four-plus month delay due to a pandemic, quarantining for months more away from friends, family and home, protests over racial injustices and a completely new playoff format and... well, we don't want to make excuses.

But the Flyers — despite holding the No. 1 seed in the Eastern Conference and playing like one of the best teams in hockey at the end of the regular season in March and at the beginning of the second season this summer — simply found themselves overmatched in the second round against their foes from Brooklyn (and Long Island).

Was it the quality of their opponent — the surging and surgical Islanders who were able to forecheck to perfection and pressure Flyers' goalies like never before — that did them in? Or was it just the simple fact that this particular version of the Orange and Black was just gassed, and not quite up to the unprecedented task of prevailing in an environment like Toronto and later Edmonton?

Whatever it was, the Flyers are able to simultaneously hold their heads incredibly high while also wondering what the heck went wrong, as they pack their things and head back to Philadelphia, and later the Czech Republic, Russia, Quebec and the rest of the world.

For a month and a half, the Flyers gave fans an escape from their abnormal lives every other night from a sheet of ice inside a bubble. Their quest for their first Stanley Cup in more than 40 years ended Saturday night, in a 4-0 blowout loss, to the Islanders. Here's why

The Flyers are at their best when they score first. We've written often in this space about how a fast start fuels a Flyers victory, giving them confidence and the chance to dictate the style and pace of play. They had an unblemished record for quite a bit during this postseason when scoring first, or holding a first period lead.

That most definitely did not happen Saturday night.

Some weak Flyers' defense spotted the Islanders the first goal, as Scott Mayfield was able to skate close to the net and fire it top shelf nearly unbothered. The goal came less than 10 minutes into the first, putting the Flyers behind the eight-ball early yet again.

Their relented first strike beckoned a struggle-fest for the Flyers, as the Isles looked to be up a man in even-strength play, keeping the puck in their zone and applying ample pressure on Hart as the Flyers were unable to jumpstart their offense.

As could have been expected, the continued buzzing in their offensive zone created yet another goal, as New York was able to tease Hart to one side of the goal, opening the net wide open for Andy Green, who finished the job to claim a 2-0 advantage.

Needing to be reminded things could possibly get worse, a power play opportunity for the Islanders kept their momentum at the four-minute mark — but the Flyers thankfully were able to kill it off. A high stick inside one minutes by Jake Voracek — a questionable penalty — gave the Isles yet another man up try, which the PK unit also shut down.

Do I hear a third straight Flyers penalty? A bad substitution put too many men on the ice, putting Philly once again on its heals.

Later, after that penalty had expired, the Flyers and Hart gave up another bad goal in the second half of the second period. Brock Nelson took advantage of the Flyers moving slowly to give them an insurmountable 3-0 lead.

For whatever reason, the Flyers have been unable to figure out how to make the most of power play chances.

Claude Giroux spoke about how hard it is to win a series without utilizing the five-on-four.

The Flyers had a chance to reverse fortune on the power play pretty early, and they were able to handle the puck well and create a handful of opportunities, but none of them manifested in a goal. The empty man-advantage was the team's 12th in a row without a score in the Islanders series.

A 13th opportunity came in the third period at a key spot, with the game on the verge of falling out of competitiveness, but despite some formulaic control in the offensive zone, nothing constructive transpired.

The fact that throughout a seven-game series Philadelphia had gotten just 13 power play tries (fewer than two per game) is a testament to just how disciplined the Islanders have been over the last two weeks.

Appropriately, the Flyers were also putrid with an extra attacker on offense one last time, as they relented an empty-net goal after pulling Carter Hart late to underline the futility the team brought to the rink for Game 7.

Remember watching Game 6 and seeing that the Flyers trailed in shots by more than 20 heading into the two overtime periods?

Well, that same sluggish offense showed up in Game 7, as Philly barely mustered 9 shots in the first two periods combined (compared to the Islanders' 19).

It doesn't explain their lack of urgency and potency with the puck, but Islanders head coach Barry Trotz' idea to start back-up goalie Thomas Greiss was one that seemed peculiar at first but really panned out. After scoring five goals against starter Semyon Varlamov in Game 6, having a different netminder was a curveball for the Flyers, who had confidence that they could score at on New York's No. 1 goalie.

After a rather unimpressive Scott Laughton-Jean Gabriel Pageau fight failed to spark the Flyers, Alain Vigneault went with an extra attacker with more than six minutes to play. Seconds later, Anthony Beauvillier knocked the puck out of the Flyers offensive zone and scored on an empty net.

In a wacky penalty we have to mention here (why not pile on), the Flyers committed a penalty while trying with a 6-on-5 a second time, putting too many (count em, seven) on the ice inside the four-minute mark.